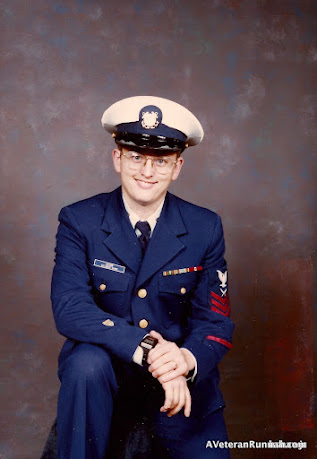 It was a lot safer than running on the roads around Rt. 1.
Although, as I added mileage to my running, I did get over around Mt. Vernon, Fort Belvoir and the Old Town section of Alexandria from the apartment. 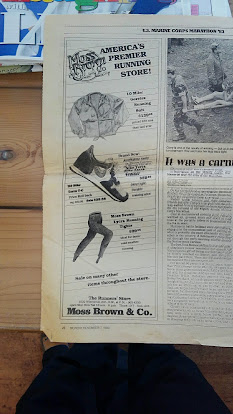 One of the first things that I did when we moved to the D.C. area was make a pilgrimage to the Moss Brown, Inc. Running Store, which I believe no longer exists under that name. I had shopped from their mail-order catalog several times while living in St. Ignace and wanted to see the store.
I was impressed.
While there I bought my first Gore-Tex Running Suit complete with a running hat and mittens. I don’t know what happened to the hat, but I wore the suit until after I retired and had to eventually throw it out in 1998 or so, there just wasn’t a lot left to it.
The mittens finally wore out around 2005 and couldn’t be repaired – those I still miss, they were perfect for running in nasty weather.
It was the best money I have ever spent on running apparel.
However, I only went back there one more (when a runner from out of town wanted to see the store) after the first time, it was too difficult to get to and the prices were out of my range in the store. I found a running store in Old Town Alexandria that was comfortable to be in, and I spent a lot of time and money there. I want to say that it was called the “Run In” but I am not certain.

I got involved with the Coast Guard Running club that first summer and participated in it for 2 of the 3 years I was stationed at Coast Guard Headquarters.
I somehow got talked into running the Marine Corps Marathon in August of that year (2 months prep is enough to prep time for a first-time marathon – right), probably right after the Coast Guard Day run. I figured that I would run a BQ and do Boston the next Spring.
Ahhh, my naïveté got the best of me on that wonderful plan.
Looking back, I definitely hadn’t trained enough to realistically finish well, but I gave into peer pressure, trained for, and started the race.
No, it did not end well. 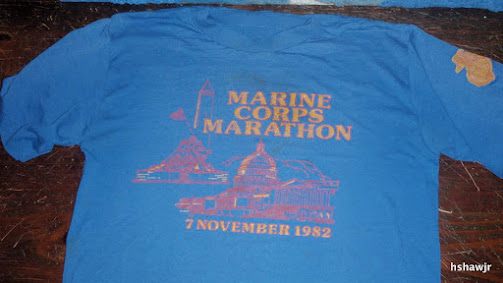 The biggest things I remember about this race were the number of people pulling their shorts down (male and female) in a field just after the start in a small clearing about a mile after the start. Sure glad that I didn’t have to mow that field later.
I was running at about a 7:00 minute pace for the first 8.0 miles, then my right knee (I have always had issues with it) didn’t like the idea of running anymore. While I pushed things to 13 miles, where I stopped and got in the meat wagon for a ride back to the start.
You do not realize the agony of getting into the meat wagon, no one else who was on that bus with me spoke a word. It was like we were going to a funeral and no one wanted to be there. You could see the pain in all the other runner’s eyes, as we got back close to the finish line inside the bus.
During that ride, I vowed to train and finish next year’s race.

I actually trained for the 1983 Marine Corps Marathon. Of all the training logs that I have had over the years, this is the one that I have been able to keep intact. When I go back through this log, I see so many training mistakes that I made, but there were things that I did correctly. 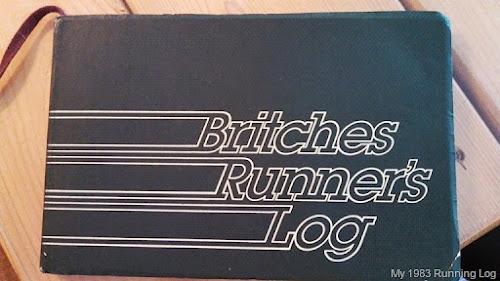 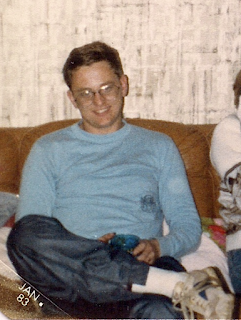 Especially, since I would go down to the “Run-In” (?) running store and run with other runners on Wednesday nights. It had become my hang-out after work (my 1st wife worked 3-11) on my way back to the empty apartment. We would take off in Old Town Alexandria and run down the Mt. Vernon bike trail. I was usually in the middle pack that did the medium distance of 6-8 miles. Then we would go over to one of the local establishments and do some carb loading.
Typically, I ran at lunch most days. My bosses were very supportive, and I was running with a lot of officers and such, so no one complained if I ran 5-8 miles at lunch and then quickly ate at my desk.
We would run around the 14th street bridge, the Reflecting Pool, around the Monuments, down through Hains Point, over in front of the White House. To me, Washington, D.C. is tailor-made for running.
The only bad thing was during the summer we had to go past the fish market to get to all the great courses. Then go back by it again to get back to work, and boy did it stink on those many hot days. I gotta admit, my gag reflex worked overtime in that area more than once.
Even back then, I was injured off and on and found that I had to be cautious when it came to my training, otherwise, I had a lot of inconvenient aches and pains, that interrupted my running.
The funniest or strangest “injury” was when I went swimming in the Potomac River while partying with some of my first wife’s friends from her work and got Poison Ivy on over 80% of my body. It wasn’t funny then, and I had to go on steroids for 2 weeks.
The steroids did work to get rid of the poison ivy and from that experience, I can see why so many athletes took them, they do make a difference in your performance. Never took them again, they scared me, to be honest.
Yes, I finished a marathon in 1983. The Marine Corps Marathon, even then, it was a big deal. Unfortunately, running and forcing myself to finish that race took something out of me, and I was never the same runner after that. I was diagnosed with a stress fracture in my right hip and stopped running for quite a while.
You can read about my 1983 Marine Corps Marathon experience here. It was such a pivotal point in my running that I made it a separate post.
During that downtime is where I picked up some pretty bad habits. Well, …let’s just say it made the ones that I had even worse.

In the spring of 1984, we moved to Woodbridge, VA and I slowly started running again. Mostly on an old power-line just down the road from where we lived – it was rough going, but there was no traffic and easier on my body than running on tar.
I made Chief, October 1, 1984, and got transfer orders to Connecticut and had purposely stopped hanging around with some people…who, looking back with 20/20 hindsight, had led me down a dark road. It had hurt some of my future career opportunities and didn’t help my reputation around the building. I know that now, but couldn’t get it through my head then, even though more than a few people tried to warn me. Let’s just leave it at that and move onward and upward.
However, by the time I left, I was back to running 20 miles a week again and beginning to be my old self.
That dark period ended.
Running brought me back to being me.

My experience in running while living in the Washington, D.C. area was really a great experience. I just wish that I had done more with it.
If I had paid attention to running instead of having wandering eyes, I believe that I would have finished the MCM in 1983 just fine (around 3:00:00) and my running experiences might have been a bit different, which would have changed a couple of other things going forward.
What might have been, is one of those games we all play, but in this case, – I really do wonder.
Looking back to my running days from 82-84 were some of the more memorable in my distance running career – which was capped off by finishing the Marine Corps Marathon.
So, I can legitimately claim the title of Marathoner (just not recently) and smile when others are talking about their experiences running one. I really don’t know if I will ever run another one, my body breaks down too much when I am putting in the mileage necessary to be able to run another marathon the way that I want.
Only time will tell.
However, if I never do another marathon, that does not make me less of a runner. I have to focus on the fact that I can keep putting one foot in front of the other. As long as I can keep doing that, I am pretty damn happy.
I hope you enjoy reading these recollections, I know that I am enjoying going through the pictures, yearbooks, journals, and reflecting back on these parts of my life.