1979 to 1982 — St. Ignace, Michigan
It was time to transition back into the Coast Guard?
I arrived at the Marine Inspection Office – St. Ignace, MI, in July 1979, after 45 days’ leave. Needless to say, I was still in civilian mode when I arrived. However, that wasn’t a bad thing, because of all my duty stations, St. Ignace was the closest to me being a civilian during my Coast Guard career. Getting to wear civilian clothes, working in a small office in the Town’s Municipal Building, made it seem as though the Coast Guard was miles away.
The first year in St. Ignace, I really didn’t run that consistently, it was more about meeting people, learning the area, new job requirements, and it is where I met my first wife that summer. All I know is there were lots of bars, let me repeat lots of bars. Eating too many meals at the Big Boy restaurant, not a lot of exercising, and gaining back all the weight that I worked so hard to get rid of those previous years. 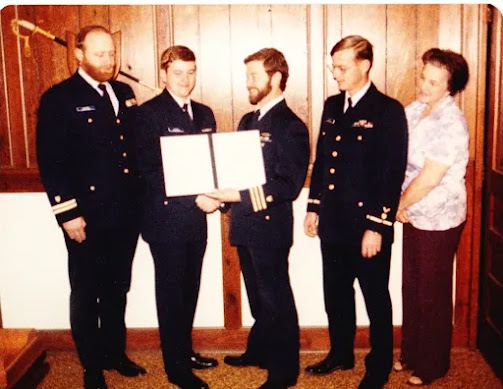 I’m on the one without gold on my sleeve, getting my Associates Degree. By the time this photo was taken, I had become quite the chunky monkey.
When I saw this photo of me from that first winter, I decided it was time to get my ass back on the roads and do something about the flubber that had come back in a bad way. Yes, I smartened up again. I stopped the boozing and began to run, and I ran a lot. My boss was a runner, and he was very supportive of my running.

The next spring was when I discovered mail-order catalogs and Moss Brown Inc. of Georgetown and ordering online using a credit card. It made it sooooo easy to simply call them up and place an order for that new pair of shoes that appeared in Runner’s World or Running Times. All I know is that Moss Brown and a few other companies did get a lot of money sent their way, and started me on my weakness for new running shoes.
I went through several pairs of running shoes while there (some excellent, some horrible). The one pair I remember most was going down to Petoskey, MI, and finding a brand-new pair of Nike Equinoxes at a bike shop that carried running shoes. I had been reading about them in my Runners World and just had to have a pair.
The store didn’t have any 7.5 or 8.0. So, I settled on a very tight pair of size 7.0s and hated the shoe, they blistered the hell out of my right foot (even back then my right foot bothered me). However, I ran in them anyway because I didn’t have any others (my then-wife had gotten rid of all my old ones before we left that day).
I know that I only ran about 50 miles (ca. 80 km) in them before I went out and bought a new pair of Saucony Jazz, which didn’t work all that well for me either. I ended up getting a pair of Brooks shoes (not sure if it was the Villanova, or what they were), which I loved and ran well in.
After those wore out, I got a pair of Etonic Streetfighter’s. Between the Brooks and the Etonics, I was pretty happy with my running shoes for a while.

I was in St. Ignace until 1982, got married, learned to love running, but I never ran in a race while I was there. However, I had several weeks of running 50-60 miles. Plus, I was reading all the running magazines I could get my hands on. I always pretended that I was training for Boston.
The biggest memories I have of running in St. Ignace are finally making it to the top of the hill beside the town office without stopping. It was a very tough uphill run for me. However, the course that I ran the most and no doubt was my favorite course was the 3.0-mile loop around the old trail out to the Airport. Even back then I liked to run trails, I just didn’t know how much.

St. Ignace is where I learned that I do love to run longer distances, even if I was and still am not all that good at it.