The time in my running life where I ran well, met some great runners and had any of my delusions of grandeur destroyed. 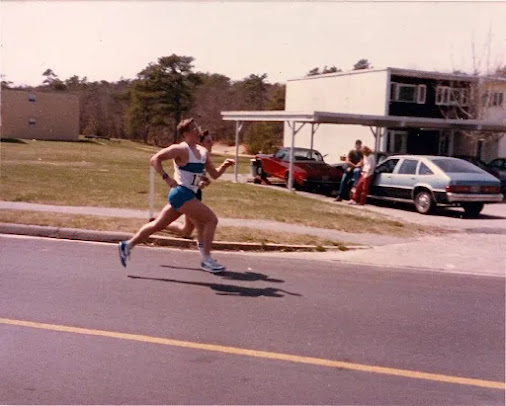 Even so, 1985 & 1986 were my personal glory days when it comes to my running career. Starting in April ’85 until September ’86, I think I ran a different road race at least twice a month and traveled to a couple of out-of-state races, specifically to run them.

Something that I had never done before.

During this time, my race pace was usually between 5:40 and 6:20, which really wasn’t that fast for the period. However, these times were faster than I had ever run before or since. I even thought that I could do better with a little different training.

Those wonderful thoughts of grandeur that runners get from time to time. Which were also dashed back to earth during this time when I got to run with some fantastic runners for a while.

We moved to the New London/Groton, CT area in October 1984, and I found a wonderful running community at the Coast Guard’s Research & Development Center in Groton, CT. About 10-15 people would run almost every day at lunchtime. So, it was very seldom that I would run by myself unless I wanted to. It seemed like there was always someone to run with.

At first, I had difficulty keeping up with most of them, but I got better with the daily runs. When they saw that I would train with them in all kinds of weather, they began to accept me into their running circle (this was before Google, Facebook, and all the running apps).

One afternoon in January ’85, Bill B. came up to my office and asked if I was interested in doing some interval training. I had been reading a bunch of stuff in “Runner’s World” about interval training on a track and told him sure. He told me that the Coast Guard Academy had an indoor track and that several of the local runners he ran with used it on Tuesday nights and were interested in starting up again in the new year.

Little did I know what I was getting myself into.

The following Tuesday night, I met with Bill and about 10 other runners at the CGA Indoor track entrance. It was dark and cold, so we just went inside without doing introductions. The Cadet at the desk asked if any of us had a Coast Guard ID card, and I showed him mine.

Cough, cough, chuckle a little. Mmmmm, Harold, you were the only one with a Coast Guard ID card. The rest had to be signed in as my guests.

It was then that I found out that I had been invited to do intervals with them because this “group” needed a Coastie to get into the track.

I was being used to get them into the track.

Once we got upstairs, Bill introduced me to AB and several other runners (who I would find out later were a bunch of regionally elite runners). I had heard of AB from reading “Runner’s World,” read his articles, and knew of his accomplishments, so I was appropriately intimidated by meeting someone so famous in the world of running.

Surprisingly, during the first workout, I found out that I could keep up and beat most of these guys for short distances, but they were way out of my league once it was over 200 meters.

No, I didn’t like the workout sessions while we were doing them. They hurt physically. Plus, it also hurt my ego more than a bit because I was easily the worst of the runners there. Yes, it bothered me a little to know that no matter how hard I trained, that wasn’t changing.

Any of those illusions of grandeur that I had been having had a reality check when I was running with those guys. They kicked my arse without even trying.

However, they were all a great bunch of guys. They didn’t look down their noses at me because I wasn’t in their league or even near it when it came to running. They all attempted to help me be a better runner with their hints and suggestions to improve my running form/style or slowing down once in a while to teach me what a certain pace felt like.

I know that I learned a lot from them, so I really didn’t mind being the “worst” runner there or being “used” to get them into the USCGA Indoor Track facility.

Hell, I used them and their knowledge to become a better runner.

I know that those interval training sessions, the help, and suggestions they gave me, made me a much better runner than I had been before.

When I did my first race that year at Conn College that spring, I broke 20:00 minutes for a 5K and a few weeks later broke 40:00 for a 10K. Eventually, I did get under 18:00 for a 5K, but I didn’t really enjoy running races over 5 miles and avoided the longer race when I could (not much has really changed, has it) 🤪.

After the Tuesday workouts, we would go down for Pizza and beer at the pizza place just down the road, and yes, they did drink beer/soda, eat and laugh just like the rest of us. The socializing afterward was as important to me as the interval sessions.

I enjoyed the camaraderie that I experienced with those guys. It was the closest thing I had experienced to being on a team or back on board a ship, without being on a ship.

After they moved outdoors and didn’t need me anymore, they still invited me to their Tuesday night workouts at whichever local track they chose that week.

They used me as the kicker when they got to the last turn on whatever interval distance they were working on. They had to get past me (I had the inside lane). Since I could make them work hard for short distances, that was my contribution to their training. It meant something to me to be able to give something back to them.

That summer of ’85, I told them that one of my dreams was to break 5:00 minutes for a mile, and they helped train and paced me during my attempts. Still, the closest I ever came was 5:01:42 (I puked after that one). I had a few 5:02/03 miles before and after that time (it was always the third lap that I had problems maintaining my pace and focus). I am very proud of getting that close to the 5:00 minute barrier. But I was still disappointed that I couldn’t find that extra couple of seconds somewhere in me to break 5:00 minutes.

I am one of those guys from the book “Once A Runner” who couldn’t break 5:00 minutes for the mile.

A wannabe and never-to-be.

5-Mile Race and a bit of Redemption

When I came back to Maine for a vacation in August ’85, to introduce my family to our daughter, who was born in July. While there my Dad told me about a local 5-mile road race over in Corinna. I saw a few people I had run with in high school that day. We did some catching up about our lives since high school before and after the race. Although, I think I surprised them a bit by coming in second overall in a pretty decent time.

Finally, at least in my eyes, I had redeemed myself in a small way for all those years of futility and under-achievement while running Cross Country in high school. It is one of those moments when you cross the finish line, and you know only one other person finished before you – it was very satisfying.

Especially when a couple of my old Cross Country teammates who had beaten me easily and regularly congratulated me on beating them that day.

I was going to run a Marathon in Old Lyme, CT. in hopes of qualifying for Boston, during October ’86, and after a 20-mile training run a few weeks before the marathon, my right knee swelled up like a balloon. I couldn’t walk, much less run on it, and the Doc at the Coast Guard Academy told me to forget about running the Marathon that year.

So, I volunteered that day (I knew the organizers) to help during the race and watched my friends finish.

I guess, right until I had surgery in May 2011, that my right knee has always bothered me. It makes me wonder how long something was wrong with my knee (maybe since 1983 and a certain Marine Corps Marathon), and how it was not addressed or diagnosed correctly before then.

I am not a name-dropper, but Amby Burfoot was a great guy, and I am glad that I had the opportunity to meet and see him in places apart from races he participated in locally. At those races, I never would have talked to him, I am too intimidated by famous people and by all the other people who are usually trying to catch their attention or fawn over them at something like that. I just don’t like that kind of social interaction. I am better in small groups, where I do not have to try to attract someone’s attention.

Even so, I can still picture watching Amby running around the track back then. How fluid he was, it was his running that really let me see the difference between the better local runners and a former elite runner. Then to compare it to my messed-up running form, well, there wasn’t any. This was 15-16 years after he won Boston, and his form was still remarkable.

During this time, I also got to meet and speak with John Kelley (the Younger) on several occasions at his Running Store and in other social situations. He was always a gentleman, very knowledgeable of running.

The last time I saw him in 2003, he was gracious enough to act like he remembered me from all those years ago after I told him the nickname that I used back then, “Radar”.

After moving to Jewett City, CT in the summer of ’87 – it was one of those times when life got in the way of my running. Our first child was born in July 1985, so she was beginning to be needier,  A much longer commute, the injury, and a different boss who was not as tolerant about time out of the office (running at lunch). All played into making it more difficult for me to run consistently at home or work. Then the second kiddo came along in April 1988, which made running even less of a priority.

Those factors led to a steady decline in my running, plus I began playing AD&D while injured and drifted away from my running circle of friends. They found another Coastie to get them into the Indoor Track during the wintertime, and I didn’t run a road race again for many years for many reasons.

After the knee healed up I started running again, but not with the passion, consistency, or zeal that I had had, and certainly not at the mileage or speeds I had run, just the year before.

The years 1985 and until October 1986 were my glory years in running, as far as being able to run fast, set PR’s, and see how good great runners actually are.

Here is to the Glory Years – may we all have memories of our own. 🙂

I hope you enjoy reading these recollections, I know that I am enjoying going through the pictures, yearbooks, journals, and reflecting back on these parts of my life.