The one race that has and continues to haunt me. Unfortunately, I have a feeling that it always will.
The 1983 Marine Corps Marathon was a turning point in my running, and really not a good one.
I allowed it to change my perceptions of what running was and probably still is. As a result of this one run, I believe several things in my life changed and impact my life until now.
I wear the title of marathoner proudly because I earned it (the hard way) and if I never run another, I will always be one.
However, it was not easy for me to become a marathoner.

I had trained well for the Marine Corps Marathon and felt ready. I went over to the registration area the day before and picked up my race number, t-shirt and bought a souvenir beer mug, which I still have, and it sits on my dresser in a place of honor and as a reminder that I can do more than I believe that I can, despite the obstacles placed in the way. 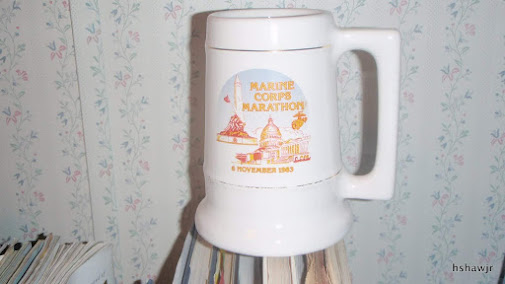 We had the customary spaghetti supper with the Coast Guard HQ Running Club, watched a slide show of earlier years’ experiences, and got our race singlet.
As a club, we hosted several out-of-town runners and I had Joe W. spending the weekend with us. I had driven the course a few times, with a couple of other runners who had run it before, to get to know the logistics and parking stuff I would have to navigate on race day. You know, all those things we runners do to make race day less stressful.
I got up that morning, and while I was nervous but also confident of what I was going to do that day.
Joe and I got to the start without any issues and thereafter, it is just a blur and I really don’t remember a lot about it.

The race start was slow with that many people running, but once I got past the first mile, I got into a sub 7:00 minute pace. I kept clicking through the miles, it felt like a great training run, only there were so many people out cheering us on.
I hit 20.0 miles (ca. 32 km) in just over 2:15:–, so I only had 6.0 miles to go and 45:00 minutes to do it. I was feeling pretty confident about breaking 3:00:00 hours.
Unfortunately, about a half-mile up the road, I got distracted by a very well-endowed female spectator who was jumping up and down, waving her arms around, cheering rather vigorously, without her supporting gear on. Yeah, I know – focus, but I watched all the bouncing versus keeping my eyes on the road. Then I stepped wrong in one of the infamous Washington, D.C. potholes. I had avoided them all up to now, the streets in Washington back then weren’t known for being well repaired.
I immediately felt a lot of pain in my right knee – yep, it was always the right one. I had to stop for a minute or so for the pain to subside and wipe a few tears of rage away.
Why me? Why now? Can I still run? Does anything else hurt? No, Okay, take a step. Not good, lots of pain. Damnit, I’m not going to BQ, lots of swearing. Try to walk again, pain, take another step, still pain, can’t give up now, gotta get going starting to cool-off, come on Harold you gotta move.
I am going to finish this fucking race!!!
I started to run again (well sort of), all I knew is that it hurt like hell.
Gimp along, but I started to move again.

There was no way I was going to ride in the meat wagon to the finish line 2 years in a row. I had made a vow the year before that I would finish this year’s race, come hell or high water!
I went into survival shuffle/walk mode, I would “run” 50 yards or so and then walk a way, I can’t remember having been in so much pain. But I kept going alternating running/walking, I was simply focused on putting one foot in front of the other.
I was limping terribly and was doing the one stiff-legged shuffle. I remember a Marine stepping in front of me and asking if I was alright. I mumbled something and moved around him and kept moving. The more I kept moving, the more my right hip began to hurt as well.
I finished!
It was not the way I had expected, when I got to the finish line, all the emotions came out tears of relief streamed down my cheeks.
I had finished.
I was numb.

I don’t remember all that much about the last couple of miles, apart from a Marine barking at me to “take that hill”. At some point another Marine in full dress – rendering a salute as I passed him, pain, always moving forward, pain, trying not to stagger and staying away from the mean greenies who kept trying to pull me from the course.
When I crossed the finish line – I buckled, and I had to be helped to the recovery tent, where I stayed for a couple of hours.
When I came out of my survival mode funk, I looked around, and it looked more like a scene from M*A*S*H*, with so many other runners in that big medical tent with me. They quickly triaged me, I wasn’t going to die – it just felt like it. The corpsman gave me some orange juice, covered me up, and made me lay there for an hour with my feet elevated.
When I was back to being somewhat coherent, the corpsman came over asked for my ID, which I had in my running shorts pocket (we were told to have our AFID on us). He proceeded to look me over, he poked me a few times, twisted my leg, and told me I could go when I could stand up without any issues.
A few minutes later, I attempted to stand up. The knee hurt like hell, but it was bearable. Unfortunately, my right hip hurt like hell as well, which I wasn’t expecting. When I attempted to put weight on it, I buckled and would have fallen if the corpsman hadn’t caught me. After talking to one of the docs, the corpsmen gave me a pair of crutches to get home with and told me to get to sick call on Monday.
I caught back up with Joe, he had finished under 3:00:00 and had seen me when I crossed the line. He told me that I looked like “death warmed over.” He knew I was headed for the medical tent when the Marines picked me up in the finishing corral after I hit the ground. I didn’t remember that part – everything was pretty hazy when I finished.
So, he knew where to look for me.
I hobbled along to my little truck, and we drove back to Alexandria. We went out to Chesapeake Bay Seafood house for an all-we-could eat meal and talked about the race. I found out that he had been behind me by about 20 yards for most of the race until I stumbled and then stopped. When he went by, he had hollered to me to “come on”, but I never heard or saw him go by. 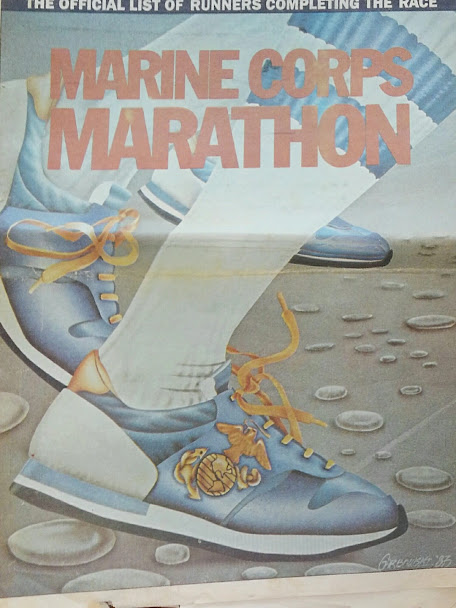 I had endured the pain in my knee and hip to do it.
I told myself that day, that I would never run another Marathon and even though I have trained for several, I have never started another one for various injury reasons.
No, I didn’t qualify for Boston, I finished in 3:45:46 (watch time)/3:47:06 (official) — a very respectable time for my first marathon.
However, it was not the time I wanted or expected.
I wanted that damn sub 3:00:00 so badly.

I knew I was injured when I finished, it was just a matter of how badly I had screwed the body up that time.
Me being me, I went into denial about how much it hurt and whether I needed to see the medical types. So, I didn’t go to sick call until things didn’t get better, you know that wait a while and make-believe that your body will spontaneously heal. The miracle that most runners continually look for when they know they are injured.
I took a week off from running and even though my hip still hurt a lot, (the knee felt pretty good) figured I would try a short run. I only got about 100 yards down the road before I had to stop, turn around, and limp back.
After that reality check, I finally went to medical, and after a week of tests and driving back and forth to Bethesda. I was diagnosed with a stress fracture in my hip and told it would be 12-18 months before I would be able to run again.
They put me on crutches for a month and said no weight-bearing exercises or activities for three months. It took a long time to heal from that injury and I got into some horrible habits, during this recovery.
But those became a different story and looking back – not a pretty one and a period of my life that I am not thrilled about looking back on.

The Reality is that

Running and finishing the Marathon in 1983 was a huge accomplishment in my running career.
Unfortunately, it was also a turning point in the runner that I was, versus the runner I would become.
After that race, I was never able to go to the well and push into the hurt locker like you need to if you want to be a good runner. Even though I have had some good times in races and have done a lot of great training, I just wasn’t the same runner – I reach a certain level of discomfort and back off, instead of embracing the pain.
I just can’t do it.
Sometimes a single event can influence how you do something for the rest of your life, and this was one of those events for me.
I will never forget my experiences at the 1983 Marine Corps Marathon. There is no doubt that I still have a few scars (and not the physical kind) from the memory of that race, and my brain isn’t going to let go of them any time soon.
Enough that re-writing that section on the finish, brought fresh tears running down these old cheeks…yeah, I know that finishing the 1983 MCM was an accomplishment, but looking back from my “old fart’s” perspective today – was it really worth it?
It is something that I will never be able to truly answer, but I know that finishing changed many things in my life, and not all of them for the better.
However, I am a marathoner and no one will ever take that away from me and I will treasure this t-shirt for as long as I am able to remember that day. 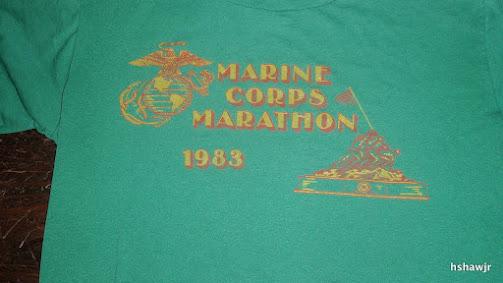