I graduated from High School on June 11th and on the morning of June 23rd I was winging my way to Cape May, NJ for Coast Guard Boot Camp. I was all of 17 years old, naive as hell, never been on a plane before, never away from home for more than a night or two, and I was scared as hell! 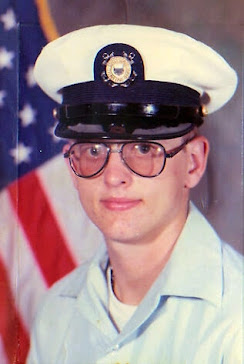 However, I also knew that I had to leave when I did. Things were not great for me at home and going in the Coast Guard, all those years ago, was probably one of the best and most important decisions that I have made in my life.

Since the day I raised my hand and said:

Voluntarily giving that oath changed my life completely and still affects it. Especially since I am still bound by my oath (I retired from the Coast Guard) and yes, I still believe in the oath I repeated. I gave the United States that proverbial “blank check” when I signed my name at the bottom of my Enlistment Contract that day, and wouldn’t hesitate to do it again.

I really hate to think what my life would have been like if I had not decided to go into the Coast Guard that summer. It would not have probably ended up…well, it doesn’t matter does it because I did. However, too many of my high school classmates have crossed over the bar to the other side that stayed home.

Once I got to Boot Camp and became a member of Uniform 26, I did my best to follow my grandfather’s advice: never volunteer, don’t stand out, don’t be a dirtbag, don’t be first, (I screwed that up a little), don’t be last, do exactly what you are told even if it doesn’t make sense, keep your mouth shut even when you want to say something, and become invisible. 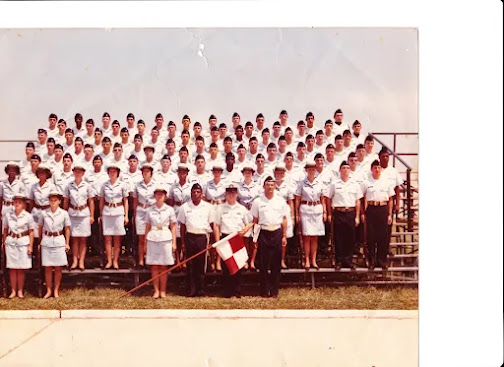 I followed that advice enough so that my 6th week into boot camp, my Company Commander – Chief Chambers (who was replaced by BM1 Terry, the ACC after week 7 if I remember correctly). Asked me what I was doing in his squad bay, what Company did I belong to, and was serious about it.

When I responded, “Uniform 26, sir!” He said, “Bullshit, come with me” and took me into the Company Office and looked me up on the rolls, when he saw that I was in his company, he just sat down and started laughing.

After he stopped laughing, he told me to get to hell out of there. Unfortunately, I was also in his spotlight for the next few and did more pushups, dying cockroaches, and earned more demerits than I had in all my previous 7 weeks put together. At least, until I was able to go back to being invisible again when others in the Company needed his attention more than I did.

Running All the Time

One thing about boot camp – if you were not in formation, you were “on the bounce”, running wherever it was you needed to go.

The morning formation runs were pretty easy, but what we had to run in really sucked. We were issued the old white canvas, rubber bottom sneakers for running. True minimalist running shoes – if only they had fit decently. Then, when it wasn’t PE, we had to wear steel-toed boon-dockers (which totally sucked and caused way too many blisters). Especially, when running with a rifle at high port on the beach or Marlborough country (those frigging sandy beaches), which our company seemed to visit way too often.

So, I probably ran more during the 10 weeks in boot camp than I had my whole last year in High School.

The only time I didn’t really listen to my grandfather’s great advice was twice – during the 300-yard shuttle runs in our PE phase testing.

During the 2nd week PE test, I almost beat this big guy from Philly in the 300-yard shuttle run. He was pissed that a scrawny little kid from Maine had almost beat him. A lot of his “friends” gave him a lot of grief for that, and I quickly learned to avoid him, if I wanted to avoid dealing with his attitude.

It worked most of the time.

During our 8th week, we had our last PE progress test, which included another 300-yard shuttle run. We ran the elimination heats and finally, it came down to the 2 of us and 3 other guys. Before the last heat, he told me he was going to kick “my ass – bad” this time, and if I beat him, it would even be worse!

He was definitely trying to intimidate me. It was working too, he had gotten in trouble a couple of times for fighting in the squad bay and undoubtedly had some problems with his temper. I know he could have hurt me badly if he wanted to. However, I was the only one in our Company, that had a prayer of beating him in the 300-yard shuttle, and we both knew it.

During the race, it was one of those times when everything just comes together perfectly, and we were side-by-side coming off the last shuttle. At that point, I found another gear and just kicked it in, I beat him by a good 10 yards and kept running for a ways before I stopped and looked around.

I was actually scared he might try to kick my ass for beating him right then and there. I wanted to put a little distance between us.

When I jogged back up to the finish line, one of the PE instructors told me I had broken the recruit record for the 300-yard shuttle. I have no idea what the time was and that my name was going on a plaque in the base gym – never saw it???

The guy, from Philly, came over because he had been “ordered” to be a good sport. He glowered at me and shook my hand (he damn near broke it) and said he had never seen anyone run like that before and that we would talk about it “later”. That kind of ruined the moment for me more than a little.

If I remember right, he got assigned to “red belts” later that afternoon for something he said to the Assistant Company Commander, which was probably a good thing for me.

The next day during our morning formation run, I stepped in a sewer drain wrong and almost broke my left ankle. I was in the hospital for a week and barely got to graduate with my Company.

I don’t know if it was true or not, but a couple of guys told me it was probably a good thing I was in the hospital ward until right before we graduated. “Certain” people had looked for me to give me a “blanket party” for winning that race.

This was also the first time in my life I had actually the opportunity to sit down and talk to any other race. Back then, there was only one black family in the town where I grew up in Central Maine, and they didn’t have any kids. There were no Asians, no Hispanics, etc., pretty much everyone was of white Anglo-Saxon background or didn’t advertise their heritage (things were different back then).

Needless to say, leaving small-town Maine for Coast Guard Boot Camp was just a little culture shock for me!

Coming to the melting pot of boot camp in the mid-’70s was eye-opening. Especially, when I met and talked to so many people who didn’t fit the stereotypes that I had of them before I got there. Those you get from the television and nightly news, along with the prejudices that were prevalent at the time.

It was a definite learning experience and taught me that it doesn’t matter if someone is black, white, yellow, red, green, or purple. It is how people treat you and how you treat them that matters the most, and that is a lesson that I still use.

Boot Camp set the tone for the remainder of my life and the person that I have become.

I did a LOT of running in Boot Camp and while most of it wasn’t competitive, it was still running. When I left, I could run long distances better than I ever could and couldn’t wait to get to the ship I had been assigned to – back in South Portland, Maine — which looking back, is probably the worst thing I could have done, but that is a different story.

I wouldn’t trade the experiences that I had that summer in Coast Guard Boot Camp and the life lessons I learned that have served me well to this day.