Putting to Rest the Ghosts of 1983 Marine Corps Marathon

As I get older, I am taking the time to look back, exploring the different events, people, and things that changed the direction of my life for good or ill. At times doing so hasn’t been an easy journey, and many of the things I have and am looking at were things I would not wish upon anyone else.
However, it is remarkable how our sense of reality, or at least our perceptions of things that happened in our lives, changes over time. Especially as we look back on an event that was an important part of who we became.
For me, as a runner, one of those events was finishing the 1983 Marine Corps Marathon. 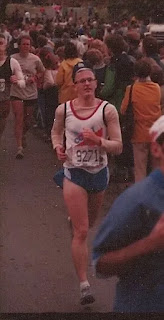 1983 MCM Photo
You can read a lot more about the events of that day here, or at least what was my perspective for several years.
I turned something that should have been a positive experience, into a thing of darkness that brought more pain and misery into my life than anything else.
After the ’83 MCM, I allowed myself to surrender to a place of darkness and then got sucked down into a maelstrom of negativity towards running and many other aspects of my life. I ended up drinking too much, hanging with the wrong people, and just being a general all-around jerk.
The pity party ended abruptly when one of my supervisors called me in and talked to me about whether I wanted to stay in the Coast Guard…or not. Yeah, it had gotten to the point where my behaviors were being noticed by those I worked with.
At that point, I realized how badly and much the race was affecting too many aspects of my life at the time. I made the changes that were necessary to pull myself out of the hole I had dug and moved on with my career, life in general, and my running.

Physically, I healed completely, but the mental side of being able to dig deep inside myself to run hard when things got tough – was gone and to many extents has never returned.
I have even run reasonably well a few times since then. Even so, I never have been the same runner that I was before the marathon, and never really let go of what happened that day emotionally.
It seemed whenever I would catch glimpses of the runner I could be again or attempt to train for another marathon. I would come up with inexplicable injuries, excuses, defeatist thinking, why bother, “I can’t,” I don’t have the time, and all those other negative thoughts not to run well, or attempt to run another marathon.
I call them demons, but mostly they were me sabotaging myself, not having to live through yet another running-related “failure” like my marathon experience.

The other part of exploring my past is that I get to look at what happened through a different lens than I did when it happened. I now see many things much differently than I did back in 1983, and coming to grips with what happened that day is something that I can do.
I have always thought of the 1983 Marine Corps Marathon from the perspective of it being yet another failure in my life. Something that I had high hopes of doing well, punching my ticket to Boston, keeping a promise I made to my grandfather all those years ago, and proving to others that I could do it.

I focused almost exclusively on the negative results of a single race. Which caused me to wallow in what should or could have been. That line of thing of “If only…I hadn’t stepped in that pothole just after mile 20”.
The runner I could have become. Going on to run Boston and achieving that goal, while my Grandfather was still alive. Mostly to defeat the naysayers in my family who said, “You are doing what?” and all the negative commentary from my first wife about my running.

The facts are that I did step in that pothole that day and messed up my knee during the race.
No, I didn’t qualify for Boston or break 3:00:00 hours for the marathon that day, both things I badly wanted to accomplish. However, despite the pain and suffering that happened over those last 6.0 or so miles and more than an hour and a half, it took to complete them – I finished and am a marathoner.
I kept my promise to myself after the DNF at mile 13 of the 1982 Marine Corps Marathon. That one I made while riding back in the “meat wagon,” that I would finish in 1983, and I did.
Finishing, under the circumstances that I did in 1983, was a huge accomplishment. One that I am damned proud of doing. Unfortunately, I let all the other shit in my mind, and more than a few negative comments from others distract me from that accomplishment.
I dug deep inside myself to keep going despite the pain and damage I was doing to my hip by gimping along. When I collapsed after crossing the finish line, there was nothing left to give.
Now, when I look back at it from my current perspective, finishing the 1983 Marine Corps Marathon was one of my toughest and proudest moments as a runner.
I learned that day that I could push my limits far beyond what I thought I could do.

Unfortunately, I took the wrong lesson from that race and squandered the great experience I had gained.
That is the first time I have ever said that.
I will never add the caveat of, “if only I hadn’t stepped in the pothole,” to downplay the results of that race again.
Time, maturity, and learning more about the mental aspects of running have given me a different perspective on what happened on November 6, 1983, at the Marine Corps Marathon.
Finally, I am at peace with the results of my marathon finish.
The demons that I created were false ones (most of them are), and I have allowed them to negatively affect my running for far too long. While I can’t re-write or change all the crap that I put myself through due to my ignorance, and yes, arrogance at the time.
All I can do is change how I will view, talk, or write about my experiences that day from now on.
I will put this chapter of my life into the perspective it should have been in all along.

The 1983 Marine Corps Marathon was a damned tough race. While I didn’t achieve all the goals that I wanted to that day, I accomplished the one goal that I promised myself the year before – to finish, and I did. I also ran great for 20 miles, before I got injured. 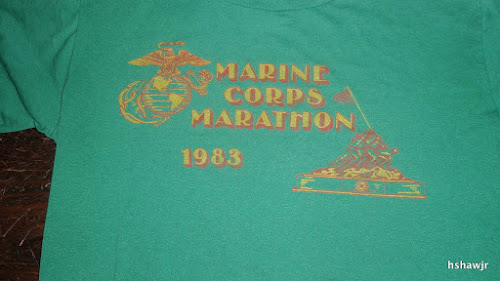 1983 Marine Corps Marathon T-shirt
Yes, I still have my race shirt from that day (a little worse for wear), and who knows, maybe someday I will wear it proudly at a future MCM pre-race expo. Then go out and run another good marathon, where I will learn something more about myself.
This is one of the more difficult posts I have written – ever, but at the same time, one of the most meaningful to me.
Putting to rest ghosts of the past is a part of the journey we all have. It isn’t the most pleasant or easy part of our journey, but it is one of the most important.

Thank you for sharing this part of my journey.