As we get closer to the end of this series of running highlights over my lifetime – that have included a few life stories as well, it gets easier, yet at the same time more difficult, to tell the stories.
I know/remember things better, but some memories are still too fresh for me to have…processed everything, or to include other people that may or may not want to be part of this story.
The things that I didn’t include surprised me, but then again, it is me you are talking about here :-).
Way back in 2015 (which does seem like a lifetime ago now), I was running fairly well, weighed about the same as I did back in 1986, but still battling far too many little nicks, niggles, and injuries. It seemed that every time I would just get going well, another “minor” inconvenient ache or pain would pop up. I know the reason now, but back then I could not figure out why.
Other than small issues, running, generally, life, was pretty good during these years. 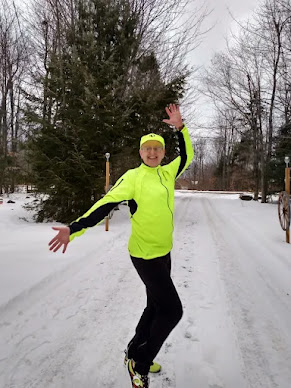 In 2015, we got word that Mary’s work was downsizing, and she was part of the downsizing. We were not sure of how things would shake out and wanted to be ready for the worst-case scenario.
So, I ended up taking a part-time Administrative Specialist position at the University College portion of the University of Maine at Augusta, which turned into a full-time position.

My hours were 3:00 PM to 9:00 PM, which really screwed up my schedule and in turn changed my eating habits. During the first six months back to work, I gained 15 pounds (ca. 7 kg). Too many stops at Annie’s on the way to work, hitting the junk food machines at work at 5:00 PM, in addition to eating my “supper” that I brought with me. Then eat the second supper after 9:00 PM and go to bed at 10:30. Then start repeating everything at 6:00 AM or so wasn’t great for the waistline.
It also meant that I was tired all the time and getting fat. My running was not nearly as much of a priority and while I liked the people I was working with, the job itself was pretty routine.
Like they say, it isn’t what you used to do that your bosses care about. It is, what you are doing on the job you have been hired for that counts. Often, too many workers tend to forget that, and their egos get in the way of the work they were hired to do.
I would like to think that I did a pretty good job while I was there and from the responses/reactions I get when I go back for an occasional visit – I think that I did. 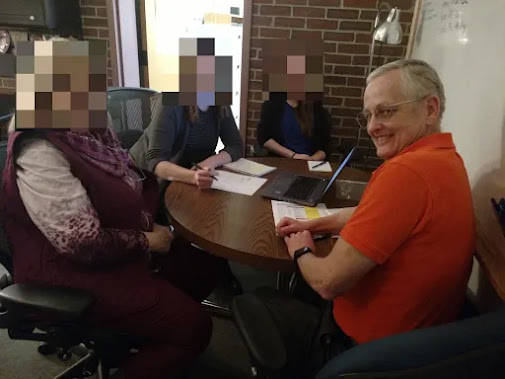 During the two years, I was at UMA, I enjoyed the people I worked with and figured out that even though, there were some advantages to working nights. The cons far outweighed the benefits for the way I wanted to live my life. While I looked for a day shift position on Campus. When it came down to it, my comfort level, the flexibility that I enjoyed, and loyalty to those I was working with kept me in that office longer than I probably should have stayed.
Yeah, things were moving along pretty smoothly, and to be honest, I was pretty comfortable working at University College’s Learning Services office…well, until…

Like most things in life, it all changed with a phone call. For us, it happened on June 2, 2017.
Mary’s brother had died on June 1st and that changed our lives moving forward.
By the middle of June, we had decided that I needed to go back into retirement. Mary was going to need a lot of help with her brother’s stuff, so I submitted my resignation to UMA effective the end of June 2017. 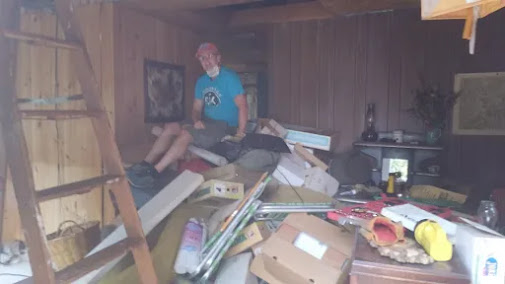 I won’t say that my brother-in-law was a hoarder, but…over the course of the next six months, we did a LOT of work (cleaning, getting rid of stuff, and repairing) his house and the family camp. They were both only in his name and he didn’t have a will. So the way things were, we had to get them both ready for sale as part of going through Probate in New Hampshire. 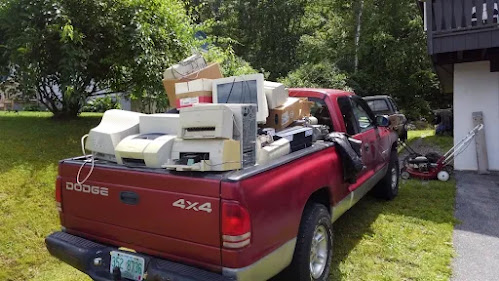 Through the end of September, we would go to New Hampshire every week and some weeks multiple times. It was a three hour drive one-way and we would spend the nights there while working. Actually, looking back we spent more time over there as we did at home. Even when we were not there we were thinking about all the stuff that needed to be done when we got back to New Hampshire.
Between the work, the worry about how much needed to be done, how much the repairs were costing, selling the properties, dealing with Probate restrictions, and dealing with our grief that was re-intensified every time we had to return to New Hampshire. So much so, that by the time we sold the house in December, we both were worn out emotionally and physically.
I know that this event changed my perspective on how I look at many things now and what I want to do going forward in life.

Although I kept running from June to September, it was more in spits and spurts and was dependent more on what was going on in New Hampshire than adhering to any kind of training plan. We were so emotionally and physically spent by traveling, working on the house, and trying to reconcile ourselves to his being dead, that it really did not leave a lot of energy for running well or consistently.
Finally, towards the end of September, the body finally broke down, and I did something to my right hip while running with Bennie that put me on the shelf for a while. Which was not what I wanted, but it was what I needed when I look back.

Getting that injury and not being able to run for an extended period forced me to look at my running.
The first thing was that I figured out that running with Bennie was part of the problem and due to his propensity for Hight Intensity Training every run, which my body just couldn’t do and stay injury-free.
This is not what I wanted to learn, but I had a feeling that was part of why I was getting nicks and niggles constantly. Along with the occasional more serious injury along the way. 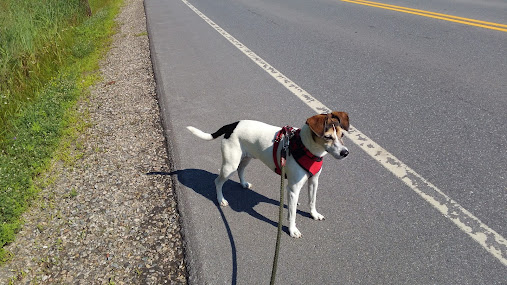 Unsurprisingly and in many ways, unfortunately, I was correct.
Since I stopped running with Bennie, the niggles have been fewer and farther between, with no serious downtime due to something getting strained/pulled or whatever while running with Bean. Too bad, but the old body just couldn’t keep up with a spastic Jack Russell Terrier named Bennie Bean.

Yep, I knew that my running form sucked big time, but figured there wasn’t a lot I could do about it. Then I did a bunch of research — again, on the different running form change programs out there (Pose, Natural Running, Chi Running, and so many others that to list them would be a post in and of itself).
I had tried the Chi Running method for a while in 2012/2013 and given up due to how restrictive it was. In Chi Running there is just that way to run. However, after looking at all the different programs again, it seemed as if it was the best one for me at the time, and jumped back aboard the Chi Running bandwagon.
I used it pretty much exclusively from mid-October to about Christmas, and it helped nurse me back to running pain-free. However, the good thing was that it forced me to focus on my running form and gave me strategies to use that I am still working on, like:
However, there were some things that I couldn’t wrap my head around and those things made me move on from Chi Running.
So, I continued to search for something that was closer to what I was looking for to help me stay focused on improving my running form. Without being as restrictive in the methodology or ideology of getting to the one true running form – there isn’t one.
All these years later, my running form isn’t a whole lot better. At least now, from continuing to read and watch all those videos, I have an idea of the direction that I need to go to help me run more efficiently. I will never have the perfect running form that you see in some runners, but I can make mine more efficient and would like to think that I have made a few incremental changes.

No post would be totally complete without discussing running shoes for a minute.
Most of my running life, I have been searching for those elusive Unicorn running shoes that will allow me to run well and comfortably at the distances I typically run. I have come close a couple of times, but something always seems to happen at some point where either my body changes something or the brand changes the shoe to the point where it no longer works for me.
That October, I thought that I had found a decent pair of running shoes that would do just that when I went up to Bangor and paid full price for a pair of Hoka Bondi 5’s. However, at about the same time, on a whim, I had ordered a pair of Newton Kismet 2’s through eBay at a price point that I couldn’t say no to. 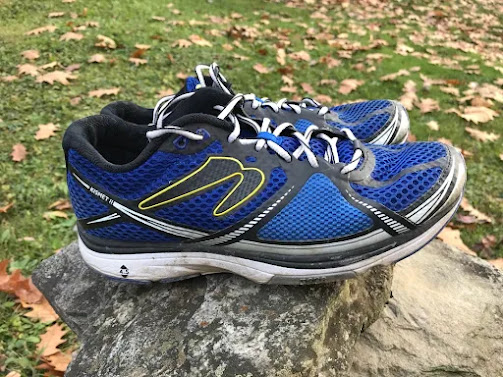 When I got to running and walking around in them, I was in for a big surprise. The Kismet’s were positively the most comfortable shoes I have run in for a long time, and the Bondi 5’s paled in direct comparison. I ran pretty much in just the Kismet 2’s until they wore out. The Bondi 5s eventually went away after several attempts to wear them didn’t work out.
See, I kept it short and sweet about my running shoe “problem”. Hehehehe

Those years were good years, with a really tough six-month period in 2017 thrown in. While I kept running during this time, it was not the same priority it was from 2011 to early 2015. However, while working at UMA, I got to meet so many great people who I hope to keep in touch with for a long time.
Losing Phil was tough and caused us to really look at what we want from life going forward. It also made us look at how we will leave our “stuff” for someone else to take care of when we finally do leave this little blue marble. It will not be a big mess, and we are working hard to get rid of anything that is just “stuff”.
Well, except for my running shoes.
After those experiences, my running, getting back to my pre-UMA weight, and living my life well going forward became priorities again.
It continues to be an interesting journey and one that I am looking forward to with the love of my life — Mary. 🙂
Yeah, Life is Good.
Come with me now, the best is yet to be.