The Start of My Running Story

That photo was from 1968 – The Wonder Years (Yes, I was the same age as the main character Kevin, in that TV show), and if you have watched that show at all, some things were pretty similar. However, unlike the fantasy of television, my life was not always all that wonderful, and these years before high school had many dark times. 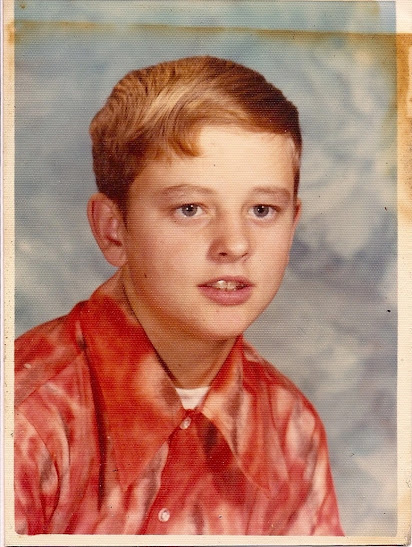 But herein lies the start of my running saga.
This is the first post, and during this series, I plan to tell a few stories from a lifetime of running and give you an idea of why I am still running all these years later.
They will be my recollections (or at least how I remember them) and honest reflections on parts of my life that others only glimpse when they saw that “guy” who was out running (mostly by himself).

How long have I been running?

Like most other people, I ran ever since I could. I don’t remember a time when I haven’t run here or there or been involved in sports that require running, but it has been over 40 years of pounding the pavement or wandering around on trails.
I never enjoyed running long distances when I was younger. What I did best growing up was running fast for short distances in sports like basketball, baseball, soccer, football (nothing organized), schoolyard races, races at the swim front, tag you are it, hide-and-seek, and all those other games we used to play outside.
You know, that era in the Dark Ages, before the day of electronic devices or the Internet. Basically, when the adults in your life told you to get your ass outside and don’t come back in until it is time to eat, or it got dark out.

The Smallest Guy my Grade

I was always the smallest and one of the youngest guys (thanks to an August birthday) in my grade in Newport. So, my primary survival skill was being able to outrun the bullies (there were more than a couple in our little town), both my own bigger classmates, and the “older” kids (either before or after school). I ran the gauntlet over by the Corner Store, Victor’s Restaurant, and the beauty parlor many days.
This meant that I needed to run really fast, but only for relatively short distances. Once you got by the gauntlet, the older or bigger kids didn’t try to run after you. Well, very far, especially if there were easier pickings behind you – just the way it was back then. I didn’t get caught very often, but it made me remember why I needed to run faster when I did.
As a result of that conditioning and good genes, I was always one of the faster guys in my class, even though I was usually what seemed like a foot shorter than everyone else. However, I could never beat one guy, and it became a mental thing after a while. I “knew” that I couldn’t beat him and didn’t for the longest time any time there was a race or time to run fast against him. He would always beat me and then rub it in.
Things start to change.

One day, down at the Newport Swim front (where you could find me about 80% of the time during the summer). A bunch of us were hanging around being typical 12 or 13-year-old jerks, and he was getting on me pretty bad (as usual) about being so much smaller than him. How I never was as good as he was – in well, you name the sport, etc.
He was your classic local “jock jerk” type that was great at everything, handsome as hell, came from a “good family,” and everyone thought he was great. He was one of the star athletes in our school, and I was just one of the lesser supporting role players who would never amount to a piss hole in the snow, according to some coaches and other players.
That day, I got fed up with his “witty” remarks and challenged him to a race from the Legion Hall steps to the lifeguard stand – about 50 yards. One of those “boy” challenges with all the words and chest-bumping that go along with it. He sarcastically said, “I don’t know why you want to even bother Shaw. You know that I will kick your ass – again!” Along with a lot of other jeering and “fun” comments from our “friends.” After about 5 minutes of this abuse and me not backing down from him, he agreed to the race.

Everyone at the beach was hooting and hollering. “Our friends” cleared all the people out of the way, and one of the girls started us. For me, it was one of those “Chariots of Fire” moments, and yes, I beat him by about 5 yards – he had underestimated me and how fast I was. He was all blustery and demanded a re-match, saying that he wasn’t ready when the girl said “go” and that he just let me win. After a lot of banter back and forth, we agreed to make it the best 2 out of 3.
He won the next race, but barely. I remember his words pretty clearly, “See Shaw, I can beat you anytime I want to!”
The third and last race was even more hotly contested between us, going back and forth until the end, and as much as I want to say that I won – I didn’t.
He beat me by about a yard, but he no longer intimidated me when we ran against each other in practices. Even though he beat me 2 of 3 races that day, beating him just that once let me know I could do it again. However, he and a few of his friends did treat me a little differently and didn’t pick on me nearly as much after that.

It was a Milestone

This was the first actual race that I remember winning.
At that time in my life, it didn’t happen all that often, and it was an important running milestone in my life.
After that day, we swapped off who would win when we were in the same heats in track or doing wind sprints. At least until our Junior year in high school, he never beat me again.
It is funny that a simple thing like a small race at the swim front turned out to be a big deal in my life, and I will never forget it. That one little race proved that I could compete against other guys in my class and hold my own with the best of them. I know that back then, I had a real complex about being smaller than almost everyone else and never being quite good enough compared to the other guys by either the coaches or even myself back then.
Looking back, I can’t believe the amount of abuse (physical and mental) I took from those guys simply because I really wanted to be part of their group – the jocks. The only problem was that I really didn’t fit their group, and the more I tried, the worse the abuse from them became, especially as we got older.

Running during this time was more about survival or at least it seemed that way on some days. It was about the only thing I had to build my self-confidence since I was a very average student and not a very gifted athlete in the sports available to us before high school.
There were numerous other things going on in my life during this time that are not as much fun to remember but are a part of my past and help make me who I am today. I can say that running was an important part of my life even back then.