Cross Country – What in the Hell Was That

Harold, 9th Grade  – 1971, and yes, I was wearing my Cross-Country/gym shirt under the oh-so-popular zipper shirts that I still love today. 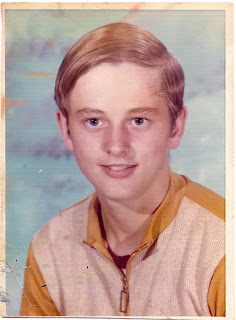 In this post, I talk about what was probably one of the more important decision points in my life, not just my running.

During the summer of my 8th-grade year, I played summer soccer a couple of nights a week at the high school with the J.V. and Varsity squads. I am left-footed and was fairly fast back then, so I mostly played left-wing. One problem, I was small (I wasn’t 5′ and maybe 90 pounds (ca. 41 kg) soaking wet). It seemed, when I got the ball, the defenders always seemed able to knock me off it and usually put me on the ground – hard.

Ordinarily, I would bounce back up. However, the last time it happened the coaches had to come out and pick me up because I had been knocked silly (probably what would be considered a concussion today). Back then, there was a lot more of a “suck it up, buttercup” attitude, and it pissed the coach off that he had to stop practice so often to see if I was okay.

That night, after practice was over, they took me aside and told me they were cutting me from the soccer team for my own protection and I had to turn in my gear. They tried to be nice and told me to come back again when I grew a little more. Needless to say, this devastated my already fragile ego, especially since it was not because I wasn’t good enough or that I wasn’t willing to work hard, but because of my size – I was too damn small.

A few days later, I was playing a pickup game of basketball in Goody Gilman’s old barn with a friend. He talked about how he was going to start running Cross Country, to get in shape for basketball season, and asked if I was interested.

I asked him what in the hell was Cross Country (I had never heard of it) and he told me it was running races on trails. I thought to myself, that is something that I could be pretty good at.

When he told me that everyone who went out for the team would make it – that they didn’t cut anyone. I really became interested. My ego was pretty fragile at this point, and I couldn’t stand being cut from another team. Another failure to live down, which seemed that I was doing an awful lot of that summer – in sports and the rest of my life.

Getting To That First Practice

I got on the school activity bus the second week of August in 1971. All I know is that I was scared to death when I stepped onto the steps of that bus. After all, I had heard rumors about the Cross Country Coach – Mr. Smith, and what a hard-ass he was.

The soccer players on the bus with us reinforced his reputation by telling us stories about Mr. Smith, what he did at school, how he treated and hated soccer players. From what they were saying, Mr. Smith was the biggest asshole teacher/coach in the entire school district.

Oh great, just a wonderful – a coach who was a jerk – just wonderful.

We got off the bus and the soccer players all went into the gym, they knew the routine. A couple of them had some sarcastic comments for me, after all, they knew I had been cut from the soccer team and teenage boys aren’t known for their empathy.

I gave them the one-finger salute for their comments. 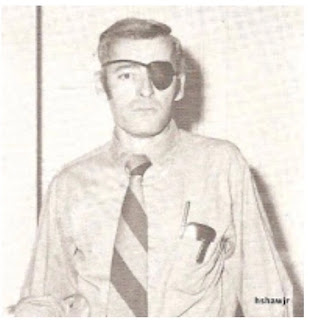 Out walks this gray-haired, skinny, old guy with a black eye patch over one eye, who glared at me while I was saluting the soccer players. In a gruff voice, asked, “You here to run cross country or what?” I stammered and stuttered “yeah” and put the finger away – yep, a great way to introduce yourself to your new coach.

Mr. Smith went over his expectations for being a member of his Cross Country team.

After he finished laying down Smith’s laws to us, he looked me over a couple of times and shook his head. He told me that I needed a different pair of shorts and shoes, (I was wearing an old too big t-shirt, cut-off jeans that I had worn most of the summer (yeah lots of holes and kind of thin), and basketball sneakers (Chuck Taylor high tops) were from last basketball season, and they were in pretty rough shape – you could see the skin peeking through the holes on the tops and in places on the bottoms. I know I felt more than a little out-of-place, especially when everyone else was wearing gym shorts and decent sneakers.

I looked like the boy from the wrong side of the tracks, who was fighting a losing battle to get to the other side. Looking back, it really wasn’t that far off from the comments of a few people in town about my family.

I told him that I didn’t have anything else to run in right then (we hadn’t done our back-to-school shopping yet). I was the oldest of 5 kids at that time (another one came along the next year) and we were lower middle class. We got what we needed, but not too many extras.

Looking back, I guess I didn’t make a great first impression.

He told us to go down to the track and run 4 laps around it to warm up. Thinking back, I must have looked at him like he was growing another head — 4 laps!!!

I had never run more than one lap at a time, usually as punishment for doing something stupid during soccer practice, and wasn’t too thrilled about running that far. Everyone else had started running, and I was still standing there – Mr. Smith looked down at me and made a motion with his thumb to get going, he never said a word, but I knew what he meant.

I caught up and passed everyone else, but I didn’t even make it 2 laps around the track before I started walking. I walked until he yelled at me to keep running. During that time on the track, I had a long conversation with myself about how stupid this cross-country shit was and what a jerk this guy called Mr. Smith was. Along with calling him every name in the book (under my breath, of course).

Mr. Smith then walked us around the cross-country course (a 2.2-mile course), giving his strategies for different areas and how to box in opposing runners, so they couldn’t get by. After touring the trail, he told us to go down and run another mile to cool down. Yeah, right.

This ain’t for me

I had already made up my mind that this was my first and last cross-country practice, running long distances sure as hell wasn’t for me. I cheated and only did 2 laps to everyone else’s 4. Needless to say, I got a lot of dirty looks and some comments from the other runners, including my friend. By this point, I didn’t care – I freely used that middle finger signal, since that was going to be my last time running that far – ever!

When we got back up to the gym, Mr. Smith was waiting there for us. He motioned me to come over and took me to the coach’s office. I was sure he was going to give me hell by the half-acre for not doing the 4 laps and to tell me not to bother coming back again – yet another failure.

Instead, he looked at me and told me I needed some better running gear, and gave me some old running shoes. They were Converse canvas and rubber sole running shoes that were pretty well-worn, but in a lot better shape than my old basketball sneakers.

These were the shoes that the school had for kids who don’t have a lot. Mr. Smith also had found a pair of old gym shorts and told me that I would run better next time if I wore those along with the shoes.

We talked for a few minutes about what I wanted out of running cross-country. I told him I wasn’t sure about this long-distance running stuff, that I liked to run fast and short distances.

He said something that no one before him had ever said to me…he told me he saw something special about my running and that he expected me to be one of his better runners in a few years. He also let me know that he noticed I hadn’t finished running and that he was disappointed by my not giving 100% effort, and that I needed to find a holster for my middle finger.

It didn’t matter to me then whether Mr. Smith’s prediction ever came true or not…what was important was that he was one of the first people in my life that told me that he believed in me.

That was his gift to an insecure teenage boy — belief — that I could do something. Whether he meant it or was just saying it to say it to make me feel better (I found out later that he had spoken to the soccer coach), on that day it was what I needed – badly.

That first Cross Country practice was one of those times that I know changed my life and will always remember.

I was one of those kids who didn’t really have a lot of going for him, had a tough life at home, had just been cut from the soccer team. Mr. Smith gave me a chance and a choice, both of which I needed badly at that point.

Little did I know at the time that Mr. Kenneth Smith – that Cross-country coach who, so many people didn’t like, was one of the finest gentlemen that I have ever met. He would be a major positive influence in my life all through high school and beyond.

If Mr. Smith hadn’t taken the time to talk to me and help me out that night, I never would have gone back to the next practice.

It would have been a lot easier to quit, something I had done before – too often.

Yes, I went back

Yes, I went back to the next Cross Country practice. That year, I learned that I could run 2-3 miles and have been a runner ever since, not that I ever was that great at longer distances, and will talk more about that time in my life in the next part of this series.

There are moments in our lives that determine the direction our lives will take.

That first cross-country practice was one of those moments in my life.

Meeting Mr. Smith that day resulted in my gaining a mentor, whose wisdom and sage advice steered me through some pretty difficult times while I was in High School. He was more than a coach or another one of my teachers, he became someone who I respected and later a dear friend.

What was one of those life-changing moments in your life that were related to running?