Note Taking Apps – So Many Great Ones

If there are so many great note-taking apps out there and there are.

Why was it hard to find one that worked for me?

1. Was it because there are too many?

2. My wants or needs are not the same as everyone else?

At times over the first part of 2022, I felt like I was on a never-ending quest for the Holy Grail. Rather than attempting to find a note-taking app that worked for me.

What I do know is that I have expended too much time and effort on searching for a tool. Time that I would have been better served using to learn to write better. Even so, I learned a lot about what I want and what note-taking/productivity apps are available to us mere mortals.

Let’s see – what note-taking apps have I downloaded and attempted to use this year (in loose chronological order): 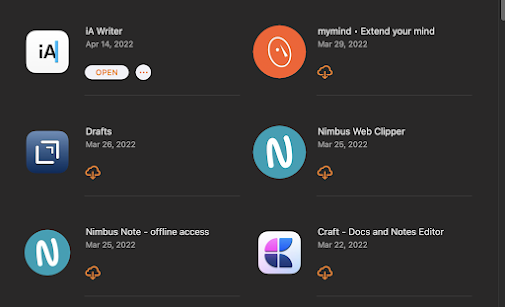 There were at least a couple more that I can’t remember. Apps I’ve forgotten, that obviously didn’t impress me.

There were apps that I knew once I used them (again), wouldn’t work for the direction I wanted to go. Those were deleted or ignored.

But there were too many apps that I thought were great at first. That once I started using them regularly, I discovered they didn’t work for me:

1. Either there were missing features I was looking for.

2. The file structure was note-book/folder oriented (something I wanted to move away from).

3. The apps themselves became a distraction to my workflow.

Apps like Notion, Roam, Logseq, Obsidian, Mem.ai, MyMind, and Reflect, all intrigued me. These apps were the hardest ones for me to wrap my head around initially. They were doing things with my notes, tasks, or data that I hadn’t imagined possible when I first started this quest.

As I learned more the relational app became the direction that I wanted to move towards. Each app brought its own strengths or weaknesses and I hoped one of them would be the answer and the end of my quest.

What I learned was that the biggest problem with many of them was that I was distracted by things I could do to the app. All the options, cutesy icons, plugins, landing pages, and different themes were distractions that prevented me from getting work done versus playing with the app.

Despite some of these apps’ ability to distract me to no end, I have gone back to each one multiple times. Once I started using those, I would see what new plug-ins I could use, new databases, themes, or landing pages I could create. Then there was the issue of spending too much time on YouTube attempting to learn how to do more with the app.

Yeah, with these apps, I was so busy making them “better” for me, that I wasn’t doing the writing or other work I wanted to get done – done.

What it came down to

Finally, it came down to which app feature set I couldn’t live without. The app, whose user interface, was what it was, and yet I enjoyed using it for several hours a day.

In the end, the best note-taking app for me was a complete surprise.

I figured that it would be either Mem.ai or Logseq, I liked both and was able to do things that I wanted. They both had strengths and weaknesses for what I was looking for but did enough to keep me interested in using them.

Then I recently came across Reflect Notes. 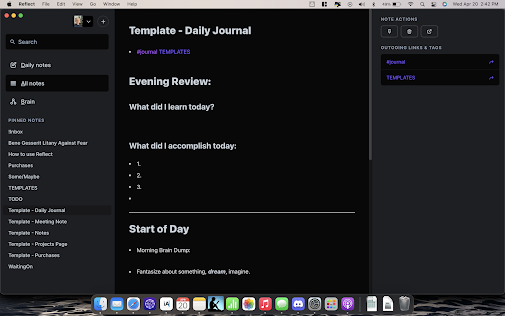 I had never heard of Reflect Notes before I saw it mentioned on Twitter at the start of April. I tried it, loved the U/I and primary feature set. I played with it for a day and deleted it. I thought it was missing too many things that I was looking for and is a ways away from coming out of Beta. Plus, the pricing was more than I was willing to pay for something still in Beta.

What is missing for me, but on Reflect Notes roadmap: split-screen, PDF support, top-level task management views, reverting to previous versions of pages, slash commands, and iPad support.

Since Refect Notes didn’t work the way I wanted I went back to using, with the intent to choose one: Logseq, Mem.ai, Roam, and Obsidian. At least I tried to use them – I kept comparing them all to Reflect Notes. Even without many of the above features, they all came up short against it for me.

As a result, I reloaded the Reflect Notes app and ponied up for the $15 a month price tag. That was a tough pill to swallow, but if I am going to commit to using an app because it works for me, the price becomes less of an issue or reason not to use it. Well…to a certain point. I created a few workarounds for the features that are missing and so far things are working better than I expected.

Though for now, I will use Apple Notes (it’s free) in the background for things Reflect Notes doesn’t do well yet and as a backup. One paid note-taking app is enough.

I will be writing more about what I like about Reflect Notes after I have been using it for a few weeks and have a more complete understanding of its strengths and weaknesses.

The biggest thing that I have found since I started using Reflect Notes as my note-taking and task manager is that 1) I want to use it, 2) I write more, and 3) I don’t lose track of things as I had been.

I Learned a lot

This note-taking app quest has taught me a great deal and made me more aware of my peculiarities, something that I will be writing more on, and how many great productivity apps are available to us.

Enough to confuse us all way too much.

Although if you are willing to dive into more than a few rabbit holes. You will eventually find what you are looking for. At least I did.

Now to see how Reflect Notes performs as my daily driver.