Like many, it is time to start Spring cleaning around the house. So, I was going through my bookshelf and came across a book I bought while I was on a work trip out to San Francisco back in 2009. The Power of Less by Leo Babauta.

Looking at the book cover brought back some great memories and more than a few chuckles when I went back and looked through the photos. Yes, I am easily distracted from doing what I was supposed to be doing – cleaning out my bookcase. It also made me think of a time in my life when my motivations and priorities were much different from what they are today. 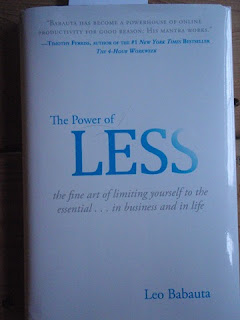 As I thumbed through the book, I remembered how I added some of Babauta’s suggestions into my work habits back then. Then put those ideas into practice at my office at the time.

Looking back, I’m certain that many of those suggestions helped me get through some rather interesting times in that job.

Often you don’t realize how big an impact a book does have on how you do things until later in life. When you go back and start re-reading it like I am now with “The Power of Less”. When you have the luxury and time, to reflect on the lessons you learned and how many of them you did incorporate into your life.

I think Babauta’s thoughts on simplicity are two of the more important messages in the book, although I know that over time my focus drifted away from doing them:

Simplicity boils down to two steps:

How often do we do either of these two things, especially the second one?

If we haven’t done these two things lately, how much time do we spend on things that don’t really matter or attempt to use systems or tools that no longer work for who we are now?

I think I am like most people for too long I didn’t take the time to identify what was essential to me at this point in my life and then work on eliminating things that are unnecessary.

Then all too often, I get a case of the shiny new thing syndrome.

That utterly ridiculous idea is that I have to have that great new shiny thing that everyone is talking or writing about, but get caught up doing it anyway. Which usually starts a cycle of going through multiple shiny things that all do about the same thing. When I finally realize that what I had or was doing before I got hot and bothered for the new shiny thing, often worked better than what I am doing now.

A good example of this is over the last six months I have purchased more than a dozen pairs of running shoes. In the hope that each pair would be the ones that would let me run injury-free and get back to running consistently.

Needless to say, this hasn’t happened, I still get injured despite all the great and highly rated running shoes I bring home. I have learned the hard way that it isn’t the running shoes that are my problem. It is that I am a runner in my sixties, who doesn’t train properly, is inconsistent with prehab/rehab, and avoids strength training.

Those are the real reasons I get injured.

Now that I have accepted the truth, I have gone back to a running shoe model that I loved back in 2020 and they are working just fine. I am starting to run better because I am doing the stuff I need to do, beyond throwing money at getting different running shoes that only made the situation worse, not better.

Like the example above, all too often when I start chasing after shiny things, I usually end up with something pretty similar to what I had been using originally. Even though it doesn’t have all the newest and greatest features that I supposedly needed.

Take a look at all the different (things or stuff), journals, apps, computers, phones, clothes, etc. that we collect doing these seemingly never-ending gotta get-it cycles. All those things that we got that either don’t work for us or aren’t what we thought they would be when we got them.

Then all those things we had to have are now things that now sit around the house or office not being used.

Instead of getting rid of those shiny things that don’t work for us, we think about all the money we spent and/or don’t want to admit that we wasted time and effort on them. So, we keep attempting to find a way to make those shiny things fit into our lives.

Yet, they continue to sit there, taking up space in our heads, devices, desktops, offices, or homes, while we attempt to figure out how we could be using them.

I am learning the hard way. If something is no longer necessary, or you don’t and probably will never use it, why keep it around?

It is a sunk cost, and you need to move on from it.

By the way, lover the last three months more than a dozen pairs of running shoes have left the building and I am working hard to get down to fewer than a half-dozen pairs. Which for an old running shoe geek, is a tall order.

What Have I Learned

When I look back to what I have been doing during the first quarter of 2022, I see those are questions I have been attempting to answer this year.

What “stuff” do I really need to live the life that I want now?

What sunk costs do I need to move on from?

It comes down to finding what is important, then letting go of the stuff that no longer serves a purpose in the life you have now. Even if you haven’t gotten your money’s worth out of that thing or might have lingering sentimental value.

We need to think more about what things make our lives better, give us confidence, fit our present lifestyles, and allow us to focus on what we want to accomplish?

I started re-reading “The Power of Less” again this weekend. When I think about it, it is one of those books that I probably should read once a year. If for no other reason than to make me re-focus on the things that are important and remind myself that I need to let go of things that are no longer relevant in my life.

How about you, are there things in your life that are just hanging around because they are something that you used when you were somebody else or no longer relevant in your life? Maybe having to think about fewer choices, make it so we get more done?

I know that I have learned that decision fatigue is something that is real and we all deal with it.

Think about it for a minute, maybe it is time to let go of those kinds of things.