This is part three of a multipart series about how I got back to having a system in place to help me remember what I need to get done, even in retirement. Many of the productivity ideas that I write about throughout this series can apply to anyone.

Part 1 – Did You Forget, or is it Information Overload?

Part 2 – It’s All About Having A Purpose

Which note-taking app should we be using? That is a question I have attempted to answer for several years and while I don’t have a complete answer, I think I am getting closer. Well, at least I think I am.

Over the years, I have found note-taking apps to be extremely useful additions to my workflow wherever I have been. Being able to send articles, book notes, take meeting notes, along with the multitude of other “stuff” that gets captured in one. However, they all eventually seem to get to the point of diminishing returns and turn into a black hole where I put lots of information in, but getting that information out stops happening.

Figuring out which note-taking app works best for how I work has been one of those things that I have struggled with since around 2009. When I was using a combination of Microsoft OneNote, Zoho Notes, The Brain, Google Notes (the original one), and something called Evernote. Then along the way, Apple Notes, Google Keep, SimpleNote, Ulysses, Bear, Notion, Obsidian, Roam all caught my eye and I made varying amounts of effort to add them into the mix.

I could see the benefits of using any of these and tried mightily to incorporate them into my work-flow over the years. They all got various amounts of attention, and due to factors of cost (some were beyond what I was willing to pay), a steep learning curve, and some after using them for a while were not what I was looking for.

So, I have had a little experience with many of the so-called note-taking apps over the years.

What I am Looking For

What am I looking for in a note-taking app in today’s world?

– Drag and drop editing of text

– Paragraphs in blocks that can be moved easily

– Can set up systems to track projects

– Search function that actually works beyond having to tag everything

– Ability to create and use templates

– Has a built-in task manager

–  / commands make life so much easier

– An app that is actively updated

Basically, something that becomes my second brain.

Back in January, I read numerous articles and watched YouTube videos about Tiago Forte’s Second Brain (where have I heard that before). Which is something that I found interesting and in line with the direction that I intended to go. I thought that it could be a philosophy and system that would help me get back on track with keeping track of all the stuff I do. So, I went ahead and looked at Apple Notes, Google Keep, and OneNote to see if I could use the free stuff. Nothing really fit into what I was attempting to create, and there were numerous videos of Evernote used within the Second Brain philosophy, and Forte used it as well.

I had drifted away from Evernote as the free version became more and more limited and there were other options that did almost as much. When I knew that I needed to update my productivity and be able to remember things better, I had to add a note-taking app back into my work-flow. After looking around it seemed to be the best fit for how I do things.

However, the free version of Evernote is rather, shall we say, useless for what I was looking to do. Luckily, Evernote offered a special price of half-off the Personal plan in January, so I thought why not. I subscribed and got to work re-learning Evernote.

Yes, a lot has changed, but I was still having to use hacks that I used to in 2010 to sort my Notebooks in the sidebar and the new Home screen wasn’t all that helpful to me. The main functionality and web-clipper were both top shelf, but there were a few little things that seemed to keep getting in my way. The best thing about Evernote was that I trusted the system and got stuff done while using it. However, I didn’t feel completely happy with Evernote and by the end of January, I had moved in a different direction.

While exploring the Second Brain stuff for Evernote, I noticed that many old Evernote users were switching to Notion. I watched my share of videos and decided to give it a try.

Moving to Notion was probably the worst mistake I have made this year by continuing to attempt to use it, after realizing the first time it wasn’t going to work for me. I wasted more time and effort attempting to get Notion to work like I do than I have any other program I remember. I saw the potential that Notion has to be fantastic, but I couldn’t get it to be fantastic for me.

Finally, after over five weeks of attempting to twist myself into a pretzel to learn how to best use Notion, I decided enough is enough. Notion is a great program that will work wonders for those that it works for, unfortunately, it doesn’t work for me. I am too distractible and when I used Notion, I focused more on making it work for me than doing the work that I was putting into Notion to do. Not a very productive use of my time to say the least. I haven’t deleted my account, but have a feeling that when it comes time to renew, I will not.

I then looked into Roam Research (too expensive and the reviews were getting mixed signals). Plus, I saw another long learning curve if I switched to it.

Obsidian was something that intrigued me, but the learning curve also seemed a bit daunting. I attempted to use it for a few days and watched multiple video tutorials to help me. Obsidian and I didn’t have that intuitive connection that I was looking for, so I decided to delete Obsidian off my hardware. I wasn’t going through another repeat of my experience with Notion.

After being less than thrilled with those four, I went back and looked again at Apple Notes, Ulysses, Google Keep, or OneNote. I quickly realized that none of them was what I was looking for. Apple Notes and Ulysses came close, but when I got on my Windows laptop, it quickly became apparent how well that was going to work, even with iCloud.

Somewhere along the line, I was able to hook up with Mem.ai, which is still in beta and requires an invite. I still don’t remember how I got to use it. It was great almost from the start. I love the direction Mem.ai is heading and many of the features that it has, are ones that I intuitively grasped. Especially their version of the webclipper/insertion tool and how it can insert templates with a slash command.

Mem.ai was simple, yet complex enough that I could see myself using it for several years into the future. However, as much as I liked the app, you can tell that it is still in beta. The IOS app still has a long way to go, the macOS version is solid, but isn’t mature yet and while many needed or requested features are on the timeline they are not here yet. Mem.ai is coming out of beta sometime in the next few months, and there is still a way to go for some needed features. For me, Mem.ai currently has too many rough edges and combining that with future subscription cost unknowns that I am not ready to commit to it being my primary note-taking hub.

What have I learned?

This means after all kinds of exploration, more than a little frustration that I have come full-circle back to Evernote. 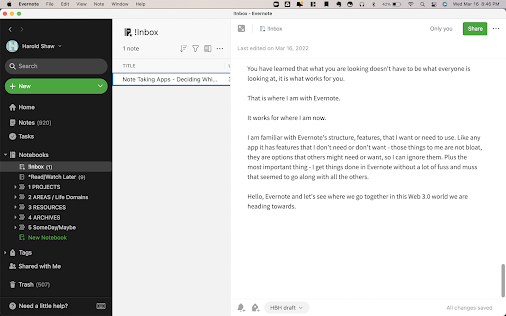 However, of all the note-taking apps I have used this year, it is the app that I like the most and can use now.

Let’s face it, Evernote is not the sexy new thing that everyone is flocking to use. It is more like the person you knew a few years ago, and you start seeing them again. They are different from how they were back then, and you realize how far they have come since the last time you saw them. You remember the good things you did in the past together and other interests you have in common. Those reasons, along with the changes that have happened to you both make you realize that things can work out quite nicely this time.

I know that I learned the hard way, that what I am looking at doesn’t have to be what everyone is using, it is what works for me.

That is where I am with Evernote.

It works for where I am now.

I am familiar with Evernote’s structure, and it has the features that I want or need to use. Like any app, it has features that I don’t need or don’t want – those things to me are not bloat, they are options that others might need or want, so I can ignore them or add them into my work-flow later if I need them.

Plus, and this is the most important thing – I get things done in Evernote without a lot of fuss and muss. It just works.

Hello, Evernote, and let’s see where we go together in this Web 3.0 world we are heading towards.