Brrrr, that is what I say first about this run. When I left the house, our thermometer read -2 degrees Fahrenheit (ca. -17 °C) and, yes, there was a slight breeze out of the North.  Let’s just say it was definitely noticeable on each lap coming back down Philbrick. The sun, while bright, didn’t bring a lot of heat to the day.

I had walked Bennie earlier, so I knew what the conditions were outside — damned cold. This is the kind of day when you double-up on most things, and on a couple, there are more layers. During the run, I wasn’t actually cold, but I wasn’t sweating too much either.

The road conditions still haven’t recovered from Monday’s snow/ice and then freeze things up. Running on the sides wasn’t a consideration since it was all ice. The good news was that the travel lanes were mostly clear, but running down the middle of a road usually isn’t that great an idea, unless you live on a usually quiet rural road.

So, I did. At least for most of the run. I only met two vehicles the entire time I was out there and managed to stay upright when I got off into the iced-over side of the road.

To be honest, I didn’t really want to be out there in that kind of cold. I don’t enjoy it, having to put on so many layers and then battle mentally, more than physically the cold just wears on me. I guess you know that already, the way that I whine so much about the cold this year.

Today, it was a battle to get beyond the one-mile mark. I had to keep thinking I could stop after the next mile. It worked well enough that I managed to eke out a 5K. Hell, I somehow managed to tie my best 5K time of 2022 (don’t worry, it was still really slow).

I did wear my Brooks Catamounts, and they did everything that I expected of them and did better than I thought they would in the sub-zero conditions. They didn’t bother my feet and I didn’t think about them during the run. I wonder if, in Brooks’ sizing world, I need to wear 9.0, not 8.5. It wouldn’t surprise me with the way the toe box on some of their shoes is more like a “V” than a “U” shape.

Overall, it was a run I was glad to have done and was even happier when it was done. No frozen eyelashes or iced over neck gaiter to show-off with, just a cold-face and a body ready to go get warmed back up. 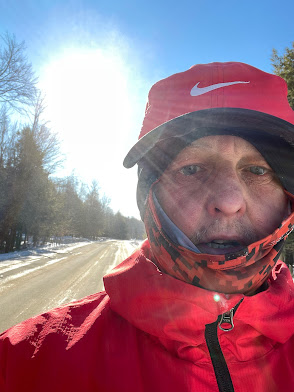