I didn’t realize that it was supposed to snow all morning, not that it amounted to all that much. What came down was just enough to coat the roads and create the wonderful salt, sand, and snow thing I call winter slurry, others call it slush. Either way, it was prevalent in certain parts of the roads around here this morning and made the run less enjoyable than it would have been otherwise. 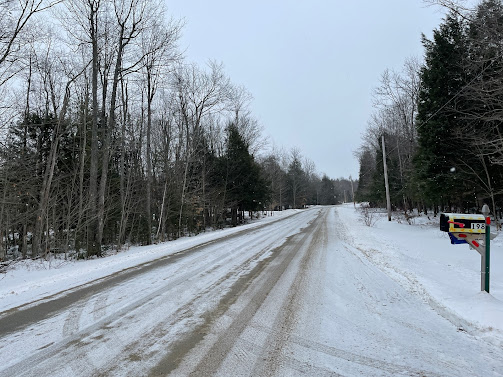 It warmed up to 19*F this morning, which felt a LOT better than the below zero temps we have been and will be battling again this weekend. This kind of cold is a matter of degree (pun intended) more than anything else. It goes back to the old theory of “if you don’t mind, it doesn’t matter.” 19*F is still cold, but it feels a lot better than zero or colder.

It was a busy morning, so I preferred not to drive back into town, but at the same time, I didn’t want to end up doing laps again in front of the house. So, I decided to head down to Pepin and also try out the Hoka Clifton 8s that somehow ended up on the doorstep last night from eBay.

I got a steal of a deal on a pair of Clifton 8s with less than 10 miles on them. They should be right in my wheelhouse, and I have been looking at them since they were released last year to get a pair of daily runners. Hopefully, they will be at least as good a fit as the Carbon X 1 and 2 that I tried last summer. I got the size 8.5 and while they felt a little snug around the house, once I got running in them, I had to stop and tighten the laces up a bit. So, I think that part will be fine. The toe box has always been the problem with the Clifton series (and Hoka shoes in general) for me, so we shall see.

Figuring out the correct stride with the Cliftons took a little longer than usual with the slurry mix on the roads. However, it was also a good test of how they would do with a bit of snow on the ground. Luckily, going down Philbrick Hill the roads were fairly clear, and I was able to open up the stride a little. They shined going downhill, and I could have gone faster, but I wanted to get a little more confident in how they handled the wet roads and get the fit dialed in before I go and see what they can do.

Once I got down to the flats, I focused on running tall, relaxed T-Rex arms and keeping my damn head up (I find that I get locked in on watching about five feet in front of me, too often), especially when the road underfoot is not ideal. I wasn’t hurrying and thought to myself these are shoes that I could have fun running in.

I did pick up the pace in a couple of spots to see how the Cliftons did, and there were no problems. When I got to the end of Pepin, I stopped to adjust the lacing and re-tie the shoes. They felt a little too loose, and tightening things up made a nice difference coming back.

The few times that I had to move over onto the plowed road shoulder, the Cliftons had a decent grip on the looser stuff, but I wouldn’t want to have to run too far on crusty ice.

Coming back up Philbrick Hill I slowed down quite a bit, the combination of the road slurry and focusing on form, along with how the new shoes were doing, I was getting tired. I thought about doing 5.0 miles, but when I got to Howard Circle, I decided that it would be a great idea to stop at 4.0 miles. Nothing hurt and the road conditions were starting to get worse, so there was not a lot to be gained by running the extra mile.

I learned a lot about the Clifton 8s this morning. They felt comfortable and more than once, I thought to myself that I was enjoying running in them. The road conditions weren’t ideal for what I will normally be using the Clifton’s for, but it was a good test to see what they could do. I learned that I have better shoes for crappy conditions like this morning, but on wet roads, they did great. With all that cushioning, the Cliftons will be great downhill shoes, but there isn’t a lot of snap or responsiveness to them so picking up the pace or going uphill, will be all on me.

Otherwise, it was a pretty decent run, and having another pair of running shoes that I can experiment with is always a good thing.