Well there, I got out the door this morning and ran outside. Yes, it was still rather chilly, and I thought seriously about getting on the elliptical for another go. However, the more I thought about it, the less enticing the elliptical sounded and I knew that I could survive the Winter weather outside for 3-4 miles.
Dressing appropriately is the most important consideration for running outside this time of year. Since the temp was 9*F * with a 9-10 mph breeze out of the SE, I knew that I better dress warmly, but at the same time ensure that I had on moisture-wicking clothes for the base layer. In other words, it was a double-up kind of day. 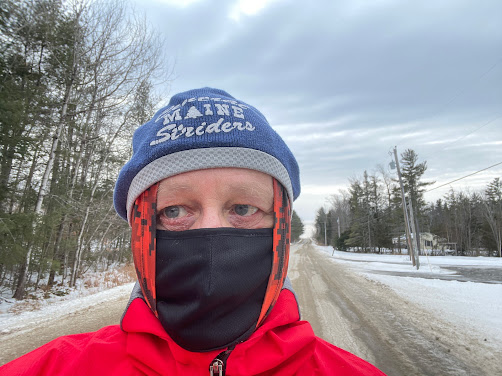 Merino wool socks (thicker ones), running tights, running pants, compression shorts, tech s/s t-shirt, tech l/s shirt, down running vest, heavy winter running jacket, glove, mitten shell, gaiter, CMS winter hat, and face mask. Nope, wasn’t cold while running, and I might have sweated a bit, but didn’t notice it until after I got back in the house. I get cold/chilled pretty easily, so I tend to overdress compared to what others might do, but I was comfortable during the run and that is what matters to me. Which today means that I pretty much nailed the dressing appropriately for me, in this weather.
The first mile was slow and into the breeze. I was glad that I had decided to wear the face mask outside. It provided just enough protection from the cold and the wind so that it didn’t feel as bad, and I didn’t get that frozen face feel. However, to wear the face mask, I couldn’t wear my glasses. A decent trade-off, but one that doesn’t let me see nearly as well.
I did warm-up fairly well for the next couple of miles and I kept playing mind games to take my focus off how cold it was and to keep running even though I would have preferred to stop at 5K. Not because I was feeling bad or anything, I was just tired of being outside in the cold. Subconsciously, I really wanted to do 4.0 miles and when my 5K ended at George’s, I would have had to walk back to the house a quarter-mile. So, I decided to do another 0.9 miles of running to avoid walking 0.25. That really made a lot of sense, but at the time the mind fell for it and I ended up with the 4.0 miles running.
It did turn into a bit of an easy progression run and that last mile I gotta admit I was more interested in getting it done. So, I did push the effort level a little higher than I did earlier in the run.
For me, this weather just totally drains me and makes everything I do that much more difficult. The roads were mostly clear, but when I had to move over on the side to let vehicles pass, I had to go slower. The sides were mostly ice-covered, while the travel lane was bare tar.
I know that I am getting a bad case of the January blahs. My running rather sucks now, the weather is unpredictable and without access to a treadmill, I have to depend on getting outside to get my miles in. The elliptical just isn’t the same, but it works as a last resort when conditions just suck a bit too much.
This is not anything that is new for me by any stretch of the imagination. I go through these blahs every January and February, whether I have a treadmill or not. It is just part of dealing with Winters in Maine. However, the older I get, the less well I deal with the vagaries of the weather and simply want to do what I want to without being all bundled up to do it.
No, I am not moving, so I gotta get into suck it up mode and just have fun and deal with the challenges of Winter running in Maine.
Today’s run was pretty decent and the cold snap has broken for a couple of days, so we will see how things are tomorrow.