I really believe that for the next couple of months that I am going to throw away the idea of having a training plan and go more with the idea of running when you can and focus on the miles that the body and weather allow.
Yes, it is January in Maine, this year it isn’t the amount of snow or cold that has limited my running. It is the number of ice storms, freezing rain, and the nasty road conditions that remain behind when they finish. Icy roads are one of those things that is a hard stop for me, without too many second guesses on my part.
The driveway and road had a serious glaze of ice on them first thing this morning from yesterday’s freezing rain. Then, when I walked Bennie on his second walk, I purposely wore my Brooks Catamounts to see how they would do on the road. While the glaze had broken up, there was a slurry of ice, sand, salt covering the travel areas and the edges were ice-covered with frozen splatter on top.
Yeah, in other words, it was tough for walking, much less running. We had gone into Augusta earlier to pick up groceries and I had mentioned to TheWife that Outer Civic Center Drive looked pretty clear and would be better for running than out around the house.
Based on those two things, I drove back into August for my run. I was/am tired of running on crappy roads. Little did I realize that there was one big flaw in my plan. More on that flaw in a moment. 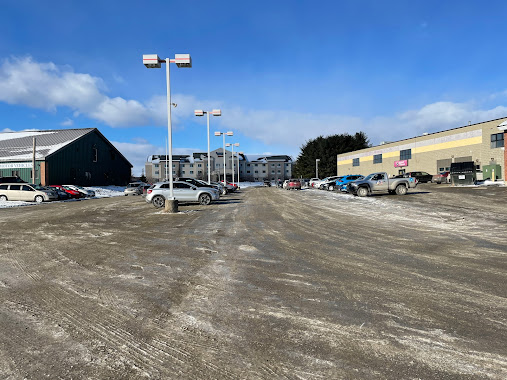 I parked at the parking lot by Planet Fitness, (they actually had a pretty good crowd there, considering the COVID-19 surge going on). When I got out of the truck, my mittens flew out of the door and started heading across the icy parking lot (it was sanded but still icy). I had to jump out of the door to chase them down.
Yep, there was a bit of a breeze.
At that point, I realized the big flaw in my plan – I would be running into that breeze going up OCCD, and from my experiences in the parking lot, it wouldn’t be fun. A little wind, okay, but with temps in the teens that little wind drove the numbers rather deeply down into the single digits for a feels like temp.
There I go whining about the weather again, but at least the road would be clear to run on. Get to the run will you, Harold…
Running past Planet Fitness did bring back numerous memories and with the way, the wind was whipping through the parking lot, I would much rather of gone inside on the treadmill for a nice run, than be running outside all bundled up.
Once I got to the road, I knew that the first part of this run was going to be rather miserable. When I finally turned onto Outer Civic Center Drive, I had my breath taken away and sort of held my ground for a split second. Not from a great sight, but the wind was blowing directly in my face.
The Strava app later claimed it was only 13 mph. I didn’t believe it then and looking back, I still don’t.
I thought, “Crap, this ain’t gonna be fun for a while.” By the time I passed the North Park building my face was already feeling rather numb, so I put the gaiter up higher, attempted to increase my cadence a little, not look at my feet and focus on the stoplights at the turn for Leighton Road.
This part of the run was putting one foot in front of the other, then repeating. Cold face, cold feet, and cold hands made me think about bagging the run when I got to the turn down by the Fire Station. However, I had to get to Leighton Road first.
Finally, I made it.
Once I turned onto Leighton, the wind wasn’t as annoying, it was more on my right shoulder, so I was able to unscrunch my form. Yes, when I am running into the wind, I tend to scrunch my body into as small a surface as possible to minimize the effects of the “breeze”. I attempted to run taller and get the feet to land a little more under the hips, while I focused on keeping my head up.
Leighton had a little more ice on the sides of the road, but the traffic was light, and I was able to time getting to the clear patches with when I would encounter the traffic — for the most part. If I had to move to the left, I would slow down a little and focus on what I was running on until the vehicles went by.
When I got down to the Fire Station, I decided to keep going, my hands had warmed up, the feeling had returned to my face and the feet weren’t complaining. I figured if the wind was too miserable coming back up Leighton, that I would just do the 5K course.
Once I got on the two side streets, the shoulders were ice-covered and pretty nasty, but luckily, I didn’t encounter any traffic. So, I didn’t need to check out the tolerances of my shoes and the ice down there. I have a feeling that I would have had to stop completely if I had needed to move over on Mt. Vernon Ave, it was that slick looking.
As I made my way back up Leighton, the wind didn’t seem too bad, so I opted to go for the longer run, but with that wind still coming down OCCD, I knew that I wasn’t going to run towards the Commerce Center to get 5.0 in today. This was going to end up at 4.0 miles and a little extra.
Going back down OCCD was a much more pleasant experience with the wind at my back. Once I got past KFC and headed straight down the little hill, the road turned to crap. The corner was a sheet of ice and the rest of the way down to the stop sign was intermittent ice, tar, slurry, tar, ice, and the corner was to the point I slowed down to a walk to get around it.
I finished up fine and was glad the run was over.
It was a fairly typical January in Maine run. Cold, windy, roads runnable, but you have to pay attention and need to dress properly. Then have the mindset of getting it done. Although I had to play some mind games to get the 4.0 plus miles in this morning, they got done. 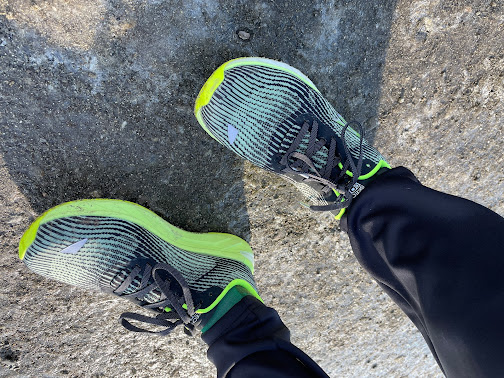 The Skechers Forza 4s did a lot better today, but the toe box still was a bit snug with the merino wools socks, and their breathability was noticed. Not in a good way in that breeze. They ran fine but felt a little firm, and I have a feeling that the cold weather does firm up the Hyper-burst midsole material a little more than I thought it might.
All-in-all a good run and I will be running down there a bit more often, I have a feeling. Outer Civic Center Drive is one of the few places around here that I can run a little more safely due to the road being clear and having a big breakdown lane.
I was scheduled for a rest day, but with two days of well below zero Fahrenheit temps coming, I knew that this warm of a day needed to be a day that I ran. Plus, I did have yesterday off as well. No, I am not looking forward to running in those temps, but if the wind isn’t howling, I might go ahead and just do laps on Philbrick in the morning. We will see; otherwise, it will be an elliptical kind of day.