It was a tad chilly when I headed out the door, and no, the roads weren’t any better than they were for Bennie’s walks earlier. The breeze was pretty steady out of the Northeast and brought the feels like temps down into the single-digits. I could tell that I had snow blowed yesterday, I was still a little sore and stiff from steering the steel monster around the yards yesterday. 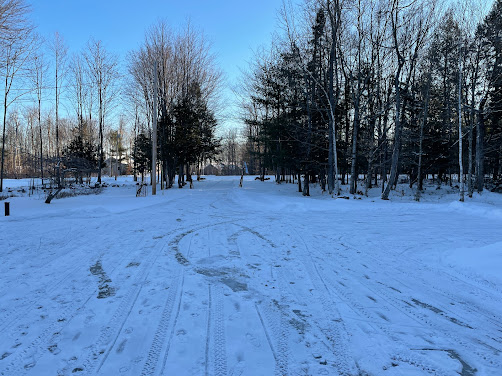 Fortunately, I was prepared today for the colder weather. I had dug out my cold weather running jacket, had on my down running vest, a short sleeve t-shirt as my base layer, and another long sleeve tech shirt over that. Then I had on my merino wool socks, calf sleeves, and long-running pants. Add to that gaiter, skull cap, and ball cap with running mittens.
Yep, I was ready for the single-digits.
I didn’t get cold, but I didn’t sweat a lot either, so essentially I dressed pretty much perfect for the conditions.
Since the road was plowed, but had lots of loose snow and white ice, with a few sections of clear tar (very few) I figured that the Catamounts would be the best fit.
Off I went, I knew that the pace was going to be fairly slow, and my stride would be shorter. Just because of the road conditions, but I did want to get the cadence up a little higher than I have had it lately.
There was a bit of slipping and sliding in places on Philbrick, and it took about a half-mile or so to get a good stride that worked with the road conditions. A shorter stride with a more full-foot landing, but with little toe-off, seemed to work the best.
Going up towards the top of Philbrick, I got to thinking that I might have overdressed. Well, at least until I turned around. While a 10 or so mph breeze isn’t all that bad, when the temp is 11*F to start, that breeze quickly makes things a lot worse. Coming back towards the house was more challenging, to say the least.
I did two laps on Philbrick and I really wanted to get at least 4.0 miles in before I stopped, but also knew that mentally I only had willpower for one more lap on Philbrick. Then I could hear the Town’s snowplow coming behind me. I knew that was only going to make the road even worse in the short term because he would be creating more white ice.
At that point, I had a choice to deal with the even more slippery road conditions and get on the struggle bus mentally to complete two more laps on Philbrick or run down to the mile marker towards Tiffany. I chose to run towards Tiffany but was pretty worried about how icy the road would be past the lower gate.
Actually, the start of the dirt section of Philbrick down to the lower gate was the best running conditions of the morning, and I did pick up the pace and lengthened out my stride a bit going down Stevens Hill.
Once I got past the lower gate, though, I slowed waaaaay down. There was packed snow with glare ice underneath where the locals have been driving through. It wasn’t too bad if I kept a quick foot and no toe-off.
However, if I pushed off too hard, it would create a divot down to the ice and I would slip back or sideways, depending on how straight my foot plant was. It was great for working on correcting some form issues that I know need the work, to say the least.
Once I got past the Blake turn-off, the road got to the point where I decided discretion was the better part of valor and intended to turn at the little gate there. When suddenly a car comes down the bump and I have to move over to the side pretty quickly on the ice. 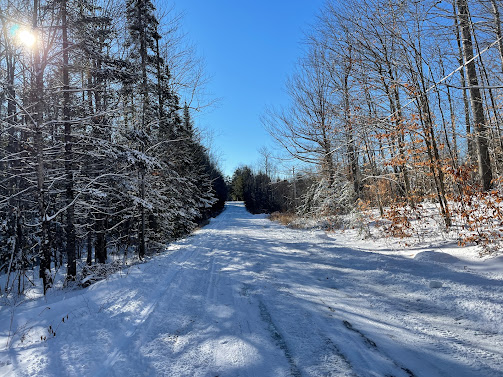 What a car is doing down through there, I don’t know? I have seen the license plate before, so I know it is local. Still, the margin for error driving a car through there is fairly small and if they met one of the big 4-wheel drive trucks, it wouldn’t be good. Or on that snow-covered ice, if they got a little twisty, they could find themselves in the ditch pretty quickly.
It was pretty slow-going after I turned around. I got a little more meechy because I had to take my glasses off. They fogged up when I went off into the side of the road for the car and stopped to take pictures, and wouldn’t clear. I couldn’t see the snow the same way and didn’t trust that I wasn’t landing on snow that wasn’t going to give way to smooth ice.
I made it back to the lower gate without any further adventures. It was just slower.
Going back up Stevens Hill wasn’t bad, but I was getting tired and could tell I was slowing down pretty good. I had thought about doing one more lap on Philbrick to get in 5.0 miles. Unfortunately, when I got up there, running on the sides was worse due to the amount of white ice from the snowplow going through. If I wanted to do the extra lap, it would be down the middle of the road, which was now wet but clear.
I decided that running down the middle of the road at 10:30 A.M. on a Saturday wouldn’t be the greatest idea, due to the amount of traffic we usually have on the weekends. Plus, the white ice on the sides was a bit too dicey to chance when I was tired, it would be a better idea to stop at 4.0. That way, I get back to the house with some good miles, in one piece and be happy with the run.
The Catamounts did everything I wanted from them. They had just enough grip that I didn’t slip and slide everywhere, but were light enough that I feel like I was carrying 10-pound weights on my feet either. 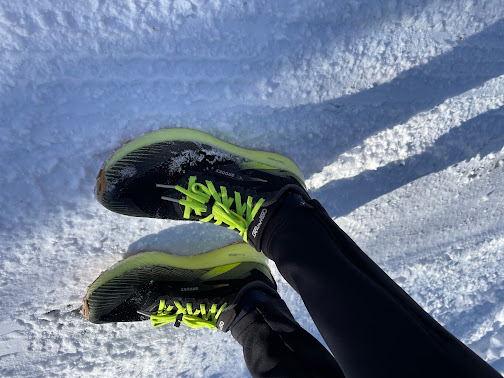 Although, I don’t see me going beyond the lower gate again until the ice conditions have gotten more in line with what I consider better for running. Yes, I could wear my ice grips, but I prefer not to use them for running if I don’t have to.
A pretty good run where I got back to the house in one piece and smiling. 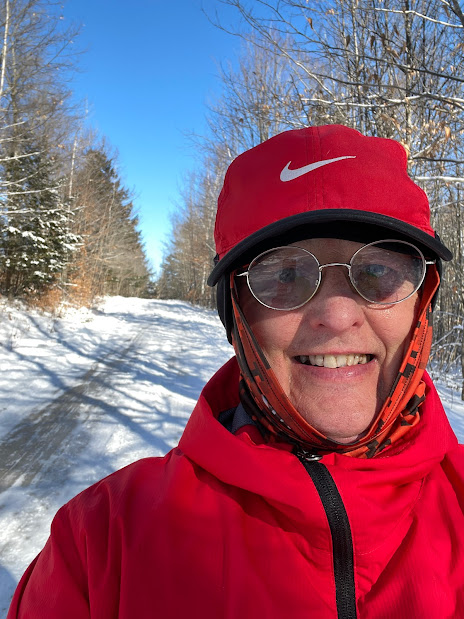 You can see the ice behind me where the car had come down that little hill. I wouldn’t want to drive down through unless I had to.