Well…there. My 2022 running streak ended.
Not that I was going to do a long running streak in the first place, but usually, I get up to around 10-14 days of streaking at the first of a year, before I’ve had enough. 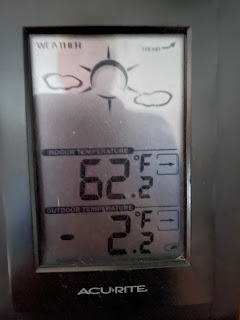 However, when you wake up to -2*F on the thermometer, it deflates the motivation for running. I don’t have that need to get out the door in all weather conditions at this point in my life.
Then I had to sand the driveway after walking Bennie first thing (it helps me remain upright), which really took away my motivation for being outside to do the 5.0 or so miles I had planned for the morning run or doing anything else outside that could be delayed until it warms up a bit.
Since it hadn’t warmed up all that much while I was doing all this other stuff. 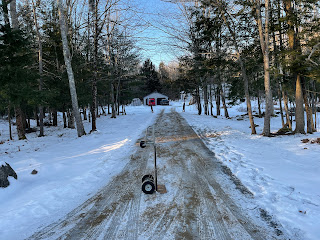 It got up to 2*F for Bennie’s mid-morning walk, and I decided after we were done that it was going to be a great day for a day off. Could I have run—sure. However, I had run in the cold on Monday and just didn’t feel like doing it again yesterday.

Instead, I worked on defragging my online stuff, so that going forward it is easier to manage, doesn’t have me in 5-6 different blogs, and mostly under one profile for everything. You can read more about it here.
It was a good choice and something I had planned on doing this month. My online presence was fragmented so much that I even had a difficult time figuring out a few things. So, it was definitely time to get it back under control.
Also, I am finding that when I listen to the body a little better, it tells me what I need to do pretty accurately. I was feeling a bit tired, and since I am working on a few things to run more efficiently, it is taking more out of me to do these shorter and supposedly easier runs.

This means that the weather was more an excuse not to run and that I didn’t run because I needed to give the body some extra rest.
You don’t realize how tiring making even small changes to how you run affects your body and, yes, mind. Even though they are not separate, we still look at them as different parts of us, when we should be looking at them as a single entity. Where if we do something different physically, it will impact our minds as well.

Even though we are expecting freezing rain later today (again), I am hopeful that I will get my run done before it gets too miserable. Come with me now, the best is yet to be.