The New Year is here, and the slate is wiped clean again. All the totals are reset to zero and since this is year 65 for me, it means that all of my previous personal records or bests have been reset as well.
Yes, a clean slate all the way around. 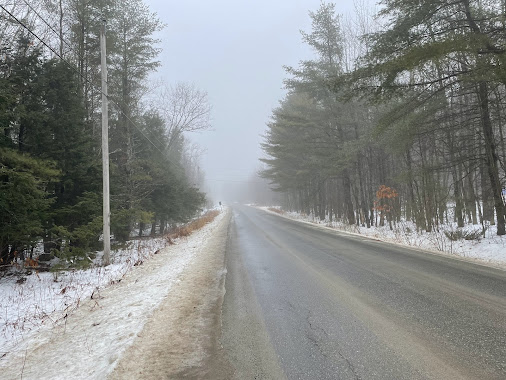 Outside was rather foggy, but fairly warm by January standards, so I decided to wear my brightest clothes (visibility) and do my Long Pepin O/B course. 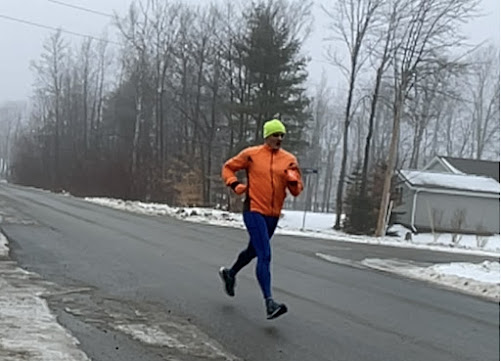 I am working a bit on doing some things from “The Lost Art of Running” by Shane Benzie, so I wasn’t going to break any speed records. For now, I am focusing on keeping my head up, instead of looking down at my feet as much as I tend to do, especially running uphill. Along with getting my cadence up into the mid-170s, versus the mid-160s that I tend to fall into.
By the time I got ready to head down Philbrick, my glasses had been made rather useless by the fog, and they went in the pocket. It is pretty bad when I can see better without them, but it was much better without them on. Plus, I was having to listen for traffic much more closely with the reduced visibility anyway.
There were a few cars and trucks out on the road, but not as many as most days, so that was a good thing. I did hit the first mile split a lot faster than I have been lately. So, that was quite nice. Then down on Pepin, it was more like a ghost town, only one car came out and there was no one outside at all. I guess the weather kept everyone inside.
Mile 2 split was consistent, and I wasn’t really attempting to run harder, but I felt good and didn’t attempt to change too much. I knew that I would be slowing down coming out of Pepin and then going up Philbrick Hill, so I figured that I would have fun with it while it lasted. Although a certain urge was starting to bother, but places that provided the necessary privacy were not available for a guy wearing bright orange and blue colors this morning until later. I was in hold-on mode for a ways.
Yep, Philbrick also got my attention. I started to put my head down and resign myself to the struggle bus up the hill. Then I remembered to get my head up and move my feet faster on a shorter stride. I didn’t go a lot faster, but I felt better and focused on keeping my head up by looking at the different mailboxes up ahead, which seemed to help me quite a bit. I still slowed down a lot and my cadence…well, let’s just say it wasn’t where I wanted, but it was a little better than usual.
Once I got to the top, I had to make a pit stop in the woods, no choice. Subsequently, the run was much more relaxing.
I finished up the run with a little more effort than I have lately, although I wasn’t pushing too hard. I am still in that I am not supposed to go that hard yet and don’t want to get things all grumpy on the first day of the New Year.
A good run, and for some reason, I just seem to run quite well in the Glycerin 19s. They felt good and apart from my right pinky toe, nothing bothered me. I have a feeling that size 9.0 would be a better fit than the 8.5s, or else get the 8.5s in a wide.
Although I did get a personal best for this course this morning. Hehehehe yeah, I know, but I will take it.
After I finished the run, I did do a quick video to give another baseline, and I am still quite consistent in the way that I run, even when I feel that I am doing things quite differently. As usual, I am not.
I still heel strike with the best of them, my right foot splays out and everything else is a mess, but I feel more fluid running than I did a few weeks ago, so there is a little progress being made somewhere. It just doesn’t show in the video.