Okay, where did the day go? It seems like a little while ago, I was outside running, and now it is after 9:00 PM. I guess playing Never Winter Nights made me lose track of time a little too much.
Oh well. 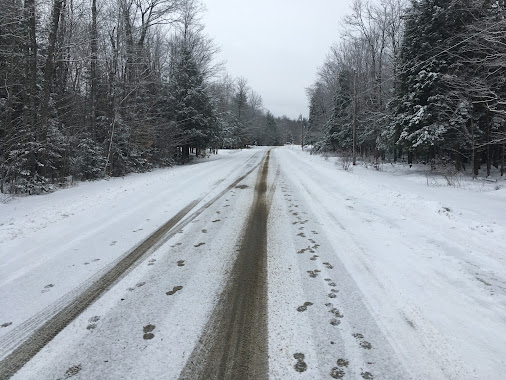 I did run this morning.
Believe it or not, I braved the inch of snow on the roads and ran an easy 5K. 😜
Okay, it wasn’t that big a deal.
After yesterday, I knew the roads were in pretty good shape and wasn’t worried about ice being under the snow. The snow made the footing a little sloppy, and I wouldn’t have wanted to run hard or fast in this stuff, but I stayed upright and whole for the entire run.
The secret was that I slowed down and thought of today’s run as my big adventure for the week. Exciting times that I am living in now, to think of a small storm like this as the big deal of my week.
The first mile was figuring out how good the footing was and working more on running tall. When I run that way with a slight forward lean, my feet tend to land more under my hips versus that awful straight-legged heel thumping I usually beat myself up with.
I also thought I was working a bit on bringing that right foot to be more forward-moving and less pointing towards the side of the road. It turned out that was still exactly what I was doing. I know that I had an injury to that right leg, and as a result, I have a nice 45* turn-out, and the footprints in the snow slam that home quite clearly.
Once upon a time, I didn’t run that way, but no matter what I seem to do now, that is how my foot points. 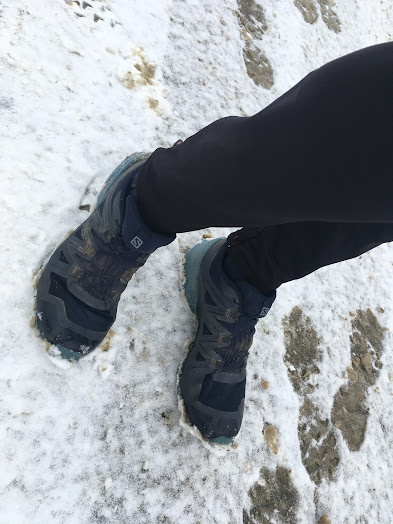 Otherwise, this was a pretty decent run, and the Salomon Speedcross 5s did a decent job getting a grip in the slushy/wet snow mix on the ground. While I don’t think I would get another pair, these seem to be my go-to shoes when conditions get nasty outside. Who knows, maybe I will be a convert by Spring.
Not really the most exciting run I have done, but I did get out the door and run. This winter, it is something that I will take with a smile.