Merry Christmas Eve to one and all who celebrate it. May it be a blessed day to you all and that dreams of sugarplums will dance in your dreams tonight. 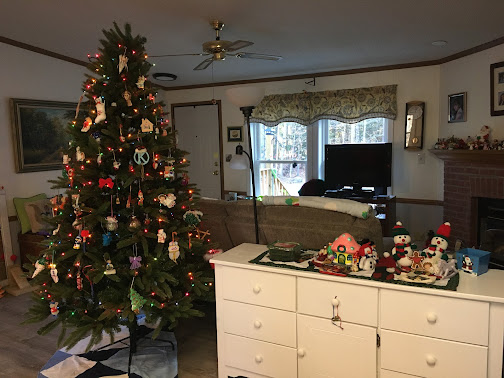 The tree is up, waiting for the consumer’s delights to be added under it at some point this evening. Errr, that is when Santa decides whether we have been naughty or nice and comes to visit our humble abode.

Yes, I did run today.

I haven’t gone into hibernation mode yet, but I am seriously thinking about doing so for a few months. With no gym membership in sight, due to the spike in COVID-19 cases, it means running outside, playing on the elliptical, or not running.
The past two days have been elliptical and then a “Did Not Run”, so I was going to run today if there was a reasonable chance that I wouldn’t slam my arse or noggin into the ice on the roads around here. Yes, I could have taken the traction chains off my boots, and put them on the running shoes. However, I am lazy sometimes and also wanted to see how the Salomon Speedcross 5s would handle this stuff.
Even though the Strava Weather app claimed it was 18 Degrees, my thermometer disagreed with a temp reading of 11 when I walked out the door. Which combined with that little 6-10 mph breeze, made the feels like temps down in the single digits, although the sun was out creating sparkles off the trees from the last ice storm. Yeah, loads of fun and below the conditions that I typically run in. When you add in the ice on the roads, it was not a day I would be outside running on most of the time.

I headed out the door and when I got to the end of the driveway looked down the road, the center section was reasonable. However, if I met traffic, I would be on one side or the other. Not particularly good footing with a vehicle bearing down on you. So, I had this bright idea of running down back.
At this point, I figured it couldn’t be a lot worse than running laps on Philbrick and fighting over the bare spots in the road with whatever vehicle traffic I would be meeting.
So, off I went, wondering how bad it was going to be down there.
Once I hit the dirt road, you could see where the Town plow had scrapped the center pretty hard. It was mostly passable until I got down to the lower gate, where the Town stops plowing, and some locals go through with their plow trucks to get the worst of the snow off the road.
Actually, that part was pretty good to run on with the Speedcross 5s. They have heavy-duty lugs and dug great into the snow/ice where the plow had gone over, but the vehicle tires hadn’t. When I got over on Blake, someone had driven a big piece of equipment the length of the road, and the frozen tire tracks down the center of the road made running on them rather miserable.
Of course, as I was getting ready to head down Blake Hill, a truck was getting ready to come up it. Since where he was going to be was mostly glare ice, I moved off the road and into the ditch to let him go by. I figured by the time he got to me, he would either have no issues or be fishtailing to get up the hill. Luckily, he had no problems, and I was able to get back on the road again without incident.
After that, I had to keep switching sides of the road to find where the grittier snow-covered ice was. As long as there was a bit of snow on the ice and crushed into it, I could get a grip with the Speedcross 5’s. A few times I had to onto the unplowed shoulder because the ice looked a little too glare for me to chance running or even walking on it.
Initially, I was going to go to the Town Office, but with those heavy equipment tire tracks frozen into the road, it made the running a bit too treacherous. I was getting tired and afraid of twisting an ankle or worse on them. Plus, the ice seemed to be getting worse, not better. So, I turned around at the bog.
Getting back up to the tar on Philbrick was more about keeping a steady pace, paying attention to the lines I was running, and not being rushing. Once I got back on the tar, I ran mostly down the center of the road. Which was clear, but the Speedcross are not shoes I would recommend for running too far on clear tar.
The Speedcross 5s helped a lot the couple of times that I had to move over for a vehicle, but my forefeet on both feet began to bother pretty quickly when running on the tar.

What did I learn?

If I need great grip on a trail or nasty weather run that the Salomon Speedcross 5’s are a great shoe for that kind of running. However, they are too firm and stiff for me to run on clear pavement for any kind of distance.
Overall, it was a pretty good run. I somehow managed to stay upright and didn’t bust anything up. The pace wasn’t great, but that was the least of my concerns during this run. Today was all about getting a run-in and enduring the conditions that I had to play outside in.
Come with me now — the best is yet to be.