Today was one of those Winter days we don’t get frequently, mid-30’s, not too much of a breeze — but the flags were still moving pretty good and a lot of sunshine. 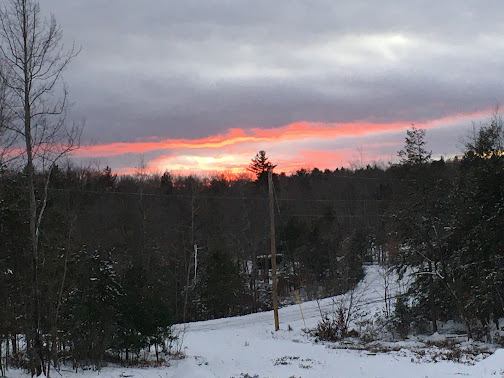 However, before I even got to run, while driving in, I was looking for one of those blue plastic boxes, or else running wouldn’t even be on my mind. It took a bit of searching, but I finally found a suitable “gray” box at a construction site with a convenient parking spot for the truck. Yeah, I know TMI, but that is one of those situations we have all had happened to us at one point or another, is a part of being a runner.
After that harrowing adventure, I was ready to run.
I decided to run from the BMV in Augusta since I was over that way, and I like to run the loop towards Chelsea and then back along Cony Road. This was also a good test for the Glycerins 19s to see how they would do on a slightly longer run and how they would do in the varied conditions that I knew were on the course.
During the first couple of miles, I purposely started out easy, and when I hit the bumps, I attempted to maintain a steady effort through to the 2.0-mile mark. I had thought about picking up the pace at that point, but something told me today was not a great day to be running faster.
I picked it up slightly going down the hills, but I never purposely attempted to push the pace. It was like I was struggling mentally with the idea of running this morning. I still am not sure what that was all about, but I never felt completely comfortable running mentally today, so it was just as well I didn’t push the pace.
By the time I got to Piggery Road, my right foot was starting to bother me a bit as well. The usual place, which is getting old. It almost seems that this is going to be the thing that limits my running going forward. It doesn’t stop me from running, but it gets damned uncomfortable and distracting by the end of the run once it starts.
After the foot started up, it was more a get it over with run, instead of enjoying it. I hate it when that happens, have to figure out a solution. It doesn’t have anything to do with the shoes because they all have this problem at some point. The only difference is how far into a run I can get before the right foot discomfort starts — sometimes.
It would have been a good day for a run, and while I got in the mileage I planned on, it wasn’t as much fun as it could have been. At the same time, I haven’t been doing my Prehab work over the past week as much as I need to. The right foot is telling me that Prehab does make a difference, so I need to get back to doing what I need to do as well.
At this point in my running, I need to do the “other” work, not just run. Which, if I am honest with myself, I am not that great at it and will be working on improving that over the next few months.
Tomorrow will be one of those elliptical days since the forecast is for us getting freezing rain — again tomorrow. We seem to be getting more and more of that kind of weather this year…personally, I would prefer straight-up snow.