Not quite what the plan called for, but I ran better than I thought I would. After last night’s hard rain and then temp drop, there was a lot of black ice around, but definitely not as bad as yesterday morning. 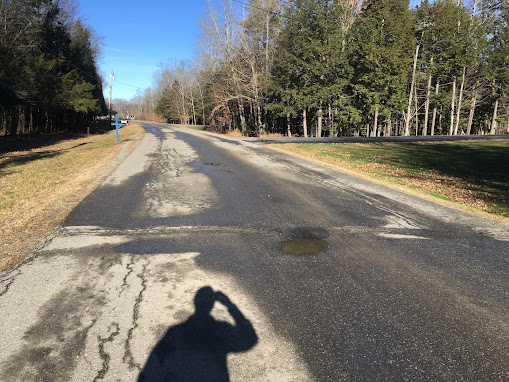 When I started where it looks wet in the photo was black ice and there were lots of sections on the run like that that melted over the course of the run. The bright sun and the 5-10 mph breeze dried up a lot of those spots, even at 28F that I finished the run at.
The conditions weren’t horrible, but not what I want when speed sessions are on the docket either. The temp was below freezing and the wind chills made it even chillier, but still in the 20s. I figured that I would wait until after 10:00 AM, then go out, do the 2.0-mile warm-up and see how I felt and what the roads were like then.
The RC plan called for: 2 miles warm-up, 2 x (600 meters at 7:00 pace, 3 min rest, 400 meters at 6:50 pace, 3 min rest, 200 meters 6:39 pace) w/5 min rest between sets, 2 miles cool down.
It turned out that the roads weren’t great, but were runnable as long as I was paying attention and not going off on some tangent — Like thinking about warmer weather and better conditions. 😂
Not that I would do that.
However, when the speed work portion of the run started, the roads were not great, especially any place that was shaded, plus I still wasn’t loose enough to run fast. Based on those two factors I decided to do everything planned about a minute slower than what the plan called for.
From past experience when the temps get below freezing and the roads still have too much black ice on them, things go bad a little too often. I end up with muscles getting strained and tendons creaking and groaning too much, then I am on the shelf — again.
I want to avoid that the rest of this year and at least all of 2022 by running a bit smarter than I usually have in the past.
I ended up completing the assigned workout, just a lot slower than the plan called for, and then stopped at 7.0 miles instead of doing a complete 2.0-mile cool-down. When I finished the temps were still under 30F and I didn’t need to cool down any more than I was already.
The bottom of my feet did start to bother again around 6.0 miles or so this time. I wore the toe spreader and it just didn’t work today. It is also the one that is pretty worn-out, so instead of continuing to use it, I threw it in the trash and will get out another one.

In Winter, I have learned the hard way not to worry as much about faster paces or super hard efforts and put a lot higher emphasis on staying healthy. I will do the workouts as assigned but will bow to the conditions outside regarding how fast I do them.
Whatever speed I have left will be there when I need it, if I have been running consistently. If I get injured from trying to go too fast for the conditions or when my body is chilled, then the consistency will not be there and I won’t run as well going forward.
Below freezing temps and lots of black ice spots on the roads are things that I look at as less of a challenge and more of a time not to be stoopid. Yes, I do smile and chuckle at the things I used to do in those conditions, but going forward wouldn’t do it again if someone paid me now.
The elliptical is nice for those days when things are too crappy, but the miles don’t count in my book and yes, I do like to meet my mileage goals for the week. Hopefully, the latest COVID-19 surge will tail off sometime in January and I can go back to the gym and have access to the treadmill and do some of these faster workouts (once my body gets used to running that fast again) more regularly.
I forgot to wear a brimmed hat again and the sun was directly in my eyes until I got back on the dirt road. I have to remember to wear the correct gear.
Now to get through the 1-3 inches of snow forecast for tomorrow. Gonna be a long winter I have a feeling, but I will make and have a smile on my face, gotta do what you gotta do to get them running in. 😇
At least I will have the opportunity to try out the Brooks Catamounts in the conditions that I got them for. Nasty, sloppy stuff, without a lot of ice. Running in the first snow is fun and gives a peaceful kind of feeling that is really great. However, about mid-January/February running in the snow has gotten old and I am not as anxious to get out and play in it.