The day before our Holiday season officially begins, the overeating, over-spending and all the other “overs”.
This week is not a training week, it is more enjoy, run how and where I want. So today, was a day for relaxing a little and finally getting out the Salomon Speedcross 5s that I got last month and trying them on a trail run.
Shhh — don’t tell anyone, while I love trails, but am not really much of a trail runner, don’t spread it around, but nowadays I prefer running on roads. Hehehehe
Oh, well.
I wasn’t all that impressed with the Speedcross 5 on a couple of trail walks I did in them. So, I figured before I run out and get another pair of trail shoes, why don’t I take them for a run. Of all the trails, I figured that Quarry Road in Waterville would give me the best range of conditions and really test the Speedcross.
Needless to say — it did!
The biggest reason that I don’t love running on trails because it is freaking hard work, and I am not in shape for that kind of work. However, just in case I hated the shoes, I decided to go on the old 3K course down towards the gate, but do it backwards.
Yeah, I love to hate those lovely bumps down through there.
The groomed trail had a lot of hoar frost and ice in places, and some melting where the sun was shining in. Since I knew there was a LOT of ice around, I wasn’t rushing, but also noticed that I wasn’t slipping and sliding all over the place like I expected. Plus, even though the path was frozen solid in many places, the Speedcross didn’t feel like I was pounding down on boards. Yes, I could feel the cushion while running, when walking they are a bit stiff.
When I got finished with the bumps, I came up to where they are making snow by the shed. The Speedcross did surprisingly well in the 2-3 inches of snow that was on the ground.
However, when I got down on Hawthorn trail along the river, it got rather swampy. The rains we have gotten lately have turned the lower trails into a water-logged, semi-frozen, muddy mess. Which, if the temps weren’t below freezing, would have been fun to play around in and really test the shoes. This kind of cold, plus wind chills, you don’t screw around with getting your feet purposely wet.
The Speedcross are not waterproof, but as nasty as it was, they never felt like they were going to come off and provided some grip through the muddy, semi-frozen slop. Both feet were soaked, but I was wearing Merino wool socks, so I figured they would be fine. Something that I did notice was that the water didn’t seem to hang around in the shoes at all.
I did take the next trail up and away from the river trail and went through the field, where the winds were blowing a pretty steady 15-20 mph. That dried out my feet even quicker. I headed over to where the John Deere single-track goes up the side of the field and danced among the roots, leaves, rocks, and slime. Well, I shouldn’t say danced, it was more like slogged my way through. Again, the Speedcross impressed me.
Heading over to North Koons, I could see more of the new disc golf course and got to play on the groom trail some more. By the time I got up to Wally’s Way, I was getting tired and started walking the hills or when I hit the wet technical sections. It was better to be safe and upright than laying down in that sloppy half-frozen muddy mess. 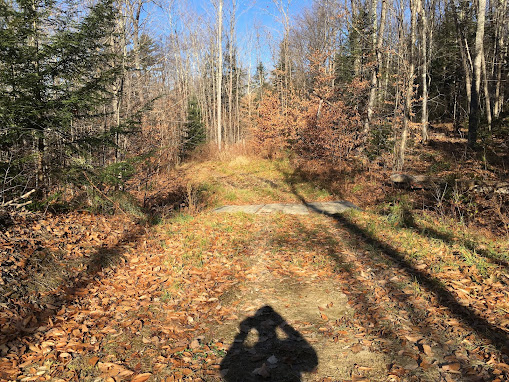 I hadn’t been on Wally’s Way before, and it isn’t really what I would call a groomed trail yet. It is more a mowed road through the woods where the grass hasn’t been mowed for a while. You had to pay attention to what you are doing, or you will be eating dirt/mud/ice.
Since I was going slow and easy, no dirt or grass was eaten today.
Then back out on North Koons and back to the truck. A pretty slow, but a good trail run where I learned a lot.

What did I learn?

I came away from this run knowing how out of shape for trail running I am. I have a feeling that next Spring I will start doing the trails a bit more than I have over the past couple of years. Not only that, but I don’t know how much easier they are on the body, but I do know that I work my arse off when I am out there on them. Working hard is not a bad thing, but being alone on technical trails at 64 is different from when you are younger.
You think a lot more about what you would do if…something happened out on the single-track or one of the more remote areas. I guess that is another reason why I have turned to doing more roads over the past few years. Yes, I do carry my phone and when I run trails now, it is in areas that do have decent cell coverage.
When you get older, that old derring-do, becomes daring less. At least it has for me.
The Salomon Speedcross 5, came away from that run as a trail shoe that I want to have on my feet when I am doing more technical stuff on trails. They gave me confidence that if I did my part, they would do their part to keep me upright. I didn’t really notice the weight and while they were fairly firm, it wasn’t an uncomfortable firm — The Speedcross 5s remained runnable and not harsh even on the hard-packed dirt portions of the run.
I didn’t have any problems with my balky right foot complaining about the shoes pressing against it too much, and the heels didn’t bother either. The shoe stayed in place and didn’t cause hot spots or blisters on a run where some others in my rotation wouldn’t have done as well. Although, the wear spots on the heels will become an issue if I don’t fix them soon.
I can honestly say that I probably would have turned around today, if I hadn’t been wearing the Speedcross 5s. I don’t have any other shoe in the house that could have done half as well for the conditions on the Quarry Road Trails this morning. They definitely helped in my efforts to stay upright in some challenging areas of the trails.
However, they are not a road-to-trail and then home type of trail shoe. So, at some point I will have to get a pair of hybrid trail shoes. To cover when conditions are particularly nasty on the roads, or I am running a course that is not really technical, but needs a little more grip than most road shoes have, but wearing the Speedcross 5s would be overkill.
As far as the Quarry Road Trails go, they are not easy trails to run and when snow does actually get here, running over there won’t really be an option. It will be open for cross-country skiing, which I no longer do, but they do have snowshoe trails, so that will be interesting and fun to get the snowshoes out of the garage again.
However, I have a feeling that the Quarry Road trails will find me doing a few more miles there next year.
Besides what’s not to like about a trail system that gives you snow, mud, ice, hills, water hazards, leaves, slime, twisting single-track, groomed trails and did I mention hills? Oh yeah, I did mention those hills, didn’t I 😄
Yeah, I will be back to play on the hills, and most likely wearing the Salomon Speedcross 5’s, if they survive the winter.