Prologue to an Adventure — What If…

Once upon a time, there was an old runnah, who was sitting in his easy chair one evening thinking about his life while looking through old photos.
He was thinking about all those things he had accomplished both as a runner and during his life beyond running. As he looked through those old photos, he thought about the people who were no longer here, or those who had chosen different paths, and frowned at some bitter memories or mistakes he had made. Then came across a few photos that made him chuckle over some of the misadventures of he had been a part of, and smiled at some amazing times he remembered fondly.
Yes, it has been a life well-lived, and he smiled again. He thought about the sands of time and how there were not as many left in the hourglass as there once were.
He thought about things he still wanted to do in this life. See his grandchildren more often, visit the Grand Canyon, watch the clouds pass over the Grand Tetons, ride the Cog up Mt. Washington, put a dime on “Put’s” grave in St. Ignace, and more, so much more. 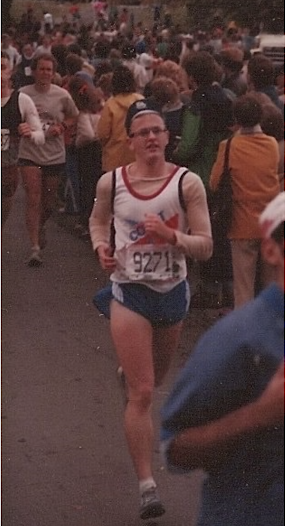 Then he came across the photo of himself running in his marathon, such a long time ago. That photo of him running so well, was how he was supposed to have looked when he finished. Instead, a lack of focus for an instant, a pothole, blinding pain, and almost two hours of pure hell.
Without realizing it, he began to rub his right knee and that darned hip began to ache too. Damn, he wasn’t even doing anything but remembering what happened that day…but the body remembered.
It remembered all too well the suffering it endured to finish that marathon. The faint echoes of the misery and heartbreak from all those years ago, still remained within him. A single moment in a lifetime of moments, one that led to years of regret, unfulfilled promise, a life that became darker than it could or should have been, and the worst part — multiple failed attempts at redemption.
The old runnah, stopped staring at the photo, got up, walked over to the window and looked out. He saw a faint reflection in the glass, when he looked closer it was as if a younger version was looking back at him, with that stoopid grin on his face. The one he got back in the day when he thought-up some hair-brained adventure to go on.
He began to smile a little too, and thought to himself…what if.
What if…he were to try one last time, one more shot at redemption, knowing that the challenges would be push him to the limits of his abilities, but what if…
This blog will share the story of his adventures moving forward and attempts to answer…what if.