I am a long-time shoe geek who generally goes through over 20 pairs of running shoes most years. Most of the reason is that I have been looking for that mythical “Unicorn” running shoe. The ones that fit my Hobbit feet correctly and has a ride that I love. Finding them has been almost as elusive as finding a real Unicorn.
In the pre-sales reviews the Saucony Endorphin Speeds seemed like they checked off many of the boxes that I look for in running shoes. After reading and watching the reviews after they were released in July 2020, I knew that they were a pair of running shoes that I wanted, more than any other shoe in a long time. 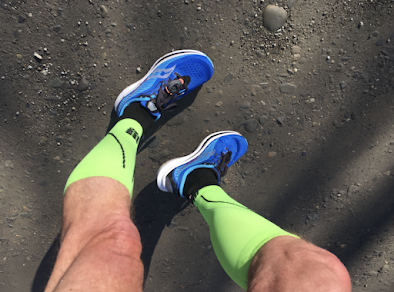 The bad part is that over the years, I have had a love/hate relationship with Saucony running shoes. I generally love how they feel underfoot — up to the point that I don’t. Usually, there is a problem with the fit in the toe box and even then I attempt to work through it because I love the ride. Then after 50-100 miles I stop running in them because the discomfort of the fit, isn’t worth the ride, and they end up in the give-away pile. It is something that I kept repeating with too many Saucony running shoes over the last 10 years
Due to those issues, I was very hesitant to pay the full retail of $160 for the Endorphin Speeds, especially with how previous Saucony shoes have fit. I could have done the mail order, then return routine I didn’t feel like playing that game with yet another pair of Sauconies.
I talked with TheWife about getting the Endorphin Speeds for my birthday in August 2020. The only catch was that I would have to try them on in person before I would get them. Normally, going for a fitting to Bangor or Portland wouldn’t be a big issue. Needing to go into a store to try them on, began a good discussion on the pros/cons or need for going into a store during the pandemic.
We both have been VERY conscious of what we do and where we go since February 2020 and this was one of those where we both had to ask “did I really need them — that badly?” After we reviewed and discussed the safety protocols that Fleet Feet in Portland had in effect, with the idea that if things kept getting worse I wouldn’t go. Based on that, I  made an appointment at Fleet Feet in Portland for my birthday to try a pair of the Endorphin Speeds on.
I ended up cancelling a few days before that appointment, due to another spike in hospitalizations and kept drooling over Endorphin Speeds online. Yes, I was bummed about not getting the Endorphin Speeds for my birthday, but I survived with a couple pair of other running shoes.
With COVID-19 continuing to play havoc through the end of 2020 and still causing major disruptions during 2021, there was no way I was driving to Portland or even Bangor to go inside a store to try a pair of running shoes on — as much as I wanted to.
Although, I did keep my eyes out for them in the usual places I tend to pick-up shoes at cheaper prices. I even came within clicking the purchase button on eBay for less than 50% of retail back in September 2020. I didn’t do it and kicked myself because someone else got them first, after I changed my mind and tried again later.
As 2020 played out, I kept reading about how the Endorphin Speeds were so many shoe reviewers shoe of the year or a close choice for it. However, I hadn’t seen what I consider a great deal on them, and was able to get other shoes at a much lower price points that I wanted to try as well.
Saucony released Endorphin Speed v2’s fairly recently, and the reviews continued to be exemplary. Which only made me want a pair even more.
Finally, a couple of weeks ago (on eBay), I found what, I thought, was a decent (not great) deal on a pair of gently used Speed v2’s. It was at a price point that I usually don’t go to get new to me running shoes. However, I wanted them bad enough that I decided that I might as just go ahead and get them.
I had waited long enough. It was time to take a chance and the Endorphin Speed 2’s into the rotation.
Especially, since I still haven’t gone in a running store since January 2020. 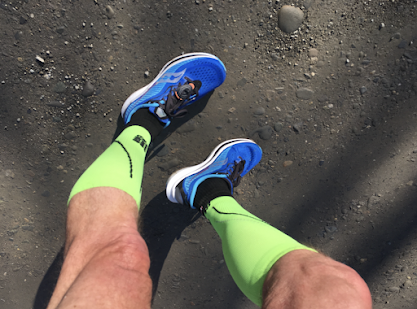 The Saucony Endorphin Speed v2’s arrived last Friday and I have had four runs in them:
The ES2’s fit comfortably, with zero issues so far. My Tailor’s Bunionette isn’t complaining about the toe box which is fantastic news and no heel slip seals the deal. It does make a huge difference in how I run, when my feet don’t bother and I can focus on running.
Well, there is one problem, I run too fast in them, even on easy runs. That half marathon training run was at a pace that I haven’t run in a long, long time. I am finding that the more I run in Speed 2’s, the more I want to run in them.
I now wonder what would have happened if I had been able to go to that appointment and get the Endorphin Speed v1’s as a 2020 birthday present, or if I hadn’t been so stubborn about trying them on before getting them. I will never know, but I have a feeling that I wouldn’t have so many other running shoes hanging around the house or out in the give-away pile.
Now to get the Endorphin Speed 2’s to 50 miles and see how my review of them compares to the other reviews out there. Based on how things are going, I have a feeling it will happen sooner than later.
Who knows maybe these are those mythical unicorn shoes I have been looking for — for so long? I will find out I have a feeling, but there is something that just feels right when I run in these shoes.
Have you ever delayed getting a pair of running shoes, then later find out how good they were and wonder how it would have worked if you had gotten them sooner?
Come with me now — the best is yet to be.