The legs were still beat-up from Sunday’s long run before I even thought about heading out the door this morning. One of the many things that I am learning as an older runner is that it does take more time to recover fully from a challenging workout. 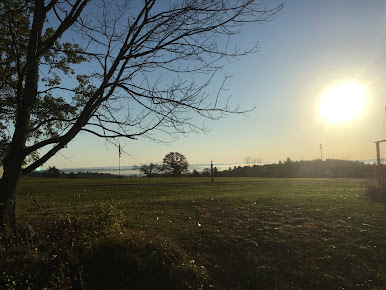 It was bright and clear, with temps in the low ‘50s and a very light breeze out of the North. This kind of weather a third of the way through November is great for us runners, but is very unusual for up heah in Maine.
That meant even though it is Tuesday, which are my “do something more day” (typically track Tuesday), I knew that any kind of speed play wasn’t going to cut it. Which meant running something a little longer — probably 6-7 easy miles of base mileage work.
It also means that I need to look at moving my “do something more day” to Wednesdays if I am going to keep running longer runs on Sundays. I am learning that I need to compromise and do what the body needs (at least a couple of days to recover), not simply keep doing what I have always done.
How about you, are you starting to look at your weekly training routine any differently as your body or needs beyond running change?
I decided to do the Ridges O/B, which would give me a good idea of how the Speed 2s would do on the dirt road and also make me do a little hill work, whether I wanted to or not.
Starting out, the Speed 2’s wanted to live up to their name, while I kept pulling back on the reins, since I knew the legs were not quite ready to blast-off again. I got through the first mile at a sub 9:00 pace and managed to do it again for the second mile. Which is faster for the effort I was doing, than I have been running this year. Yes, I blame it on the shoes and smile when I do.
The Speed 2’s did great on the dirt, and the PEBAX plate helped smooth out the rocks and stuff that tend to greet me unexpectedly when I run down back. Also, there were a couple of places which were a bit slimy and the tread was enough to get me through without any issues. However, I wouldn’t want to take them down there in the Spring when the frost is coming out of the ground — they wouldn’t be a great choice.
When I got over to Blue Ridge, I did work a little harder than usual on the hill. Then somehow I came up with a bronze on the segment according to Strava, not too many runners hit this hill — it seems.
However, it does feel nice to be run up some of these hills, without thinking so much about the left Achilles, which allowed me to run, instead of wondering how much something was going to hurt.
Although, I lost focus coming back up the middle Road — that section from the Lyons Road up to the Town Office. It is very deceptive about how much uphill that piece is. Between the hill and the dump trucks zooming by, I started to slow down significantly and didn’t notice how much I was slowing down.
Once I got back on Blake Road, I slowed down even more — that hill is a pain and more importantly, this was supposed to be an easy run. When I remembered that, I purposely eased up on the effort level to the lower gate on Philbrick, but I still ended up being one of those sub 9:00 minute “no zone” runs. One where you don’t run hard enough or easy enough, to supposedly get the biggest bang for your efforts.
Even so, I felt good and the Saucony Endorphin Speed 2s continue to impress me. They work well on the dirt road down back and the PEBAX plate does protect my feet from the rocks, without picking up multiple specimens to bring home. While they do fine when running easy, the Speed 2s shine when I pick up the pace. I have 25 miles on them already and have had zero issues with fit, blisters, hot spots, grip or any other complaints.
Well, I do have one complaint — when I run in them, I seem to run faster paces easier. I guess that really isn’t a complaint, but a testament and compliment to the shoes. The biggest thing is they are the first Saucony shoes that I have worn in many years, that I can say are comfortable. So far, I have run in them without any issues, and I can’t say that about too many of their offerings that I have tried over the last 10 years.
Overall, a nice run and despite all the dump trucks zooming by on the Middle and Lyons Road, I am still in one piece and smiling after another above-average run in the Saucony Speed 2s.