This morning’s walk in the dark was done again by myself. The dawg decided that he didn’t like it and turned around at the 200-yard mark this morning. He got further than yesterday, but not back to the whole distance yet. Yes, it was still chilly with the wind blowing, so I didn’t blame him too much. 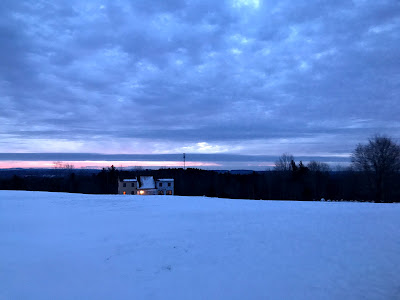 Bennie missed another sunrise. I don’t think he really notices or cares. 😉

We did another mile plus walk later where he was eager to go. So I am thinking more and more it is walking in dark than the cold.

I did go to the gym and did a complete foam roller, stretching and .25 walking warm-up before I started running this morning. You know all the things that I should be doing each time but never take the time.

Unfortunately, within about 10 steps, the leg quickly told me it was not ready for prime time and I shut it down. Instead of bagging the workout, I went and did .50 miles on the Cybex machine and then did a lower body lighter weights workout. The left hamstring did not complain at all during any of the work, which surprised me. I wonder if it is the motion on the treadmill that is part of the problem?

I will run outside tomorrow and see what happens.

Today was the first red day in the running log, which mean DNR – injured. Not what I wanted the second week of January, but I have no one to blame but myself for doing a dumb workout that was beyond my conditioning on Tuesday. Gotta stop those thoughts of lollipop and sugarplums that were dancing around in my head and get back to my current reality and condition.

Either way, I am going to be very conservative and do the things that I know that I need to do to get by this hamstring issue with the minimum of issues and down-time. It also made me re-think one of my plans and I will be re-reading Run Happy again soon, to remind me of what is important in my life and running.

Otherwise, it was one of those fairly quiet days where things just seem to move along at their own pace.

However, Hunter SD2s dog is starting to do a little better and doesn’t seem to be on death’s door any longer, so we will see how he does. He has an appointment with our Vet next Wednesday and hopefully, we will get better information on what is going on with him than we have had in the past.

I have a feeling that it will be a series of good days and bad days over whatever time he does have left. It could be soon or a few months down the road. Either way, it will be a hard day around here when/if it does happen.

You are what you do. Originally posted on Aging & Retirement – My Thoughts, written by Harold L. Shaw, Jr.