Too Many Choices = Not Always What is Best

There are so many “deals” that we can’t resist, the marketing gurus are very good at their job telling us that we need stuff that we really don’t want or need, but ends up in our homes anyway. Then there is the allure of “free stuff” the stuff that other people are trying to get rid of and we find room to put in with our other stuff.

When you walk into the local store and look around all you see are choices, there are overwhelming numbers of choices. There are multiple selections of just about every item in any store whatever its name is. Whether it be food, electronics, shoes, clothes, etc. It comes down to multiple choices at multiple price points for pretty much whatever it is you are looking for or more likely whatever it is you bought that you were not looking for.

While multiple choices or selections are great to a point, sometimes the multiple levels of choice just confuse and cause more stress than it helps. How many times have we walked into the store, saw the multiple choices of something we are looking for and just bought the one who’s packaging caught our eye the most, then walked away more frustrated by the experience than happy?

I know that I have done that so many times.

I wonder if all this plenty is more a waste of resources than we are willing to admit, in our greed and race to keep up with everyone else.

A great example of this was me today. I spent probably a half an hour trying to decide which pair of running shoes I wanted to run in for a pretty simple and easy 4.0-mile treadmill run this morning. I think it took me longer to figure out which shoes to wear than it did to do the workout. 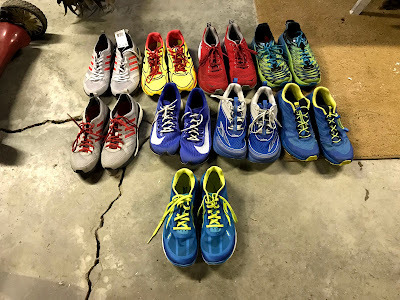 Not a good thing to say the least.

Let’s talk about my decision process:

Yeah, I felt a bit lazy and didn’t feel like going over to the faucet and rinsing them off. A me problem not anything else.

So I thought how about the 1400 v6’s I run decently in them at any speed, but I really am not feeling like going fast today and if I wear go faster shoes, even though it is an easy day, I probably would have run way too fast for a day after my long run. Which meant the Nike Zoom Fly SP’s were not a choice either. I still have the Torin 3.5 and Duo’s under the dresser, but I am not thrilled with either one of those shoes. I looked in the front closet, but the Clayton’s and Tracers, bother my right forefoot. The same thing with the Bondi 5’s sitting by the back door.

Then I looked at my Wildhorse 5s and Sense Rides sitting in the living room, but they are trail shoes and I didn’t want to run on the treadmill with either of them. Especially, since I don’t like running in either pair of shoes all that much in the first place. They just do not fit my feet comfortably.

Hey, I could go out to the back of the garage and get out Mach v1, but they bother my left heel. In the same storage box are another pair of Zoom Fly the v1’s, but while I like them they are really too big and not as comfortable as I want and there are 3-4 more shoes in that same box, but they are legacy shoes that I keep for sentimental reasons more than as running shoes.

I know I can get out one of my two Tempo 9’s on top of the metal cabinet, but I really don’t like how they feel underfoot and running on the treadmill in them was the reason that I replaced them with my original Beacons.

How about that pair of Newton Gravity 3’s that are still new in the box still…mmm those front lugs kill my forefoot on both my feet the last time I wore Gravity 3’s and I got rid of the last pair for that reason. Wait – one more place in the back of the truck I have a pair of Altra Impulse, but the last time I ran on the treadmill in them, my feet hurt for a week, so that really was not an option.

Of all the shoes I have around the house, nothing interested me or I was too lazy to clean up until I thought about…

The two pairs of shoes I got for Christmas – New Balance Beacon v1 and Propels in an EE. The more I thought about it the more it sounded like using the new Beacons was a great idea. The Beacon Line of shoes are probably the best treadmill shoes I have ever owned and it really doesn’t matter what kind of pace I run in them on the treadmill, they stay comfortable and when I finish my feet do not hurt. 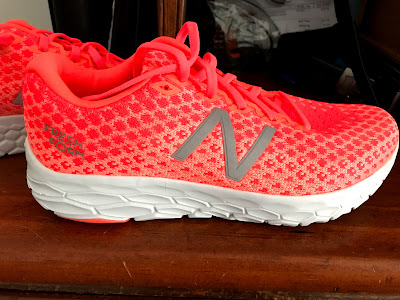 So that is what I did – after all those choices, I got out a pair of new shoes that I have never run in.

Which means that I have a big problem!

I really didn’t want to run in all those other shoes I have laying around for whatever reason. Which got me to thinking about why do I even have all of those shoes hanging around!

Especially, if when I have a chance to run in them, I go with a new pair of shoes.

I do believe that it is time to get rid of most of those other shoes that I do not use and probably will never use again.

A project for this coming week I have a feeling.

By the way – the Beacon v1 did a remarkable job on a very nice treadmill run.

Either in the stores or at home we often have so many choices that it starts to become a problem for us to decide what or which thing we want to use. I know that with all the running shoes that I do have a problem and will take care of it. However, it could be our electronics, I have five computers that I can use around the house – how many do I actually need? Then I have a couple of smartphones and go back and forth about which one I should use.

Along with so many other “things”.

I also have a feeling that I am not the only one who feels this way and while my running shoe problem is a rather extreme example I think, I don’t think I am the only one who is feeling overwhelmed at times by the number of choices that we have to make each and every day for things we own or want to own.

How about you, do you have so many of choices of something that it becomes a distraction when you have to decide which or what to use?