The Year in Tech – More Change

2019 was a year of change, simplification and reflection for me.

I guess it wouldn’t be complete if I didn’t make some major adjustments, changes and going backward to go forward with how I use technology. Over the course of the year, I have played around in all three of the major tech silos with varying degrees of frustration, success, and enjoyment.

Now I would like to believe that I am fairly tech-savvy and have a pretty good idea of how to use and abuse most operating systems quite nicely. 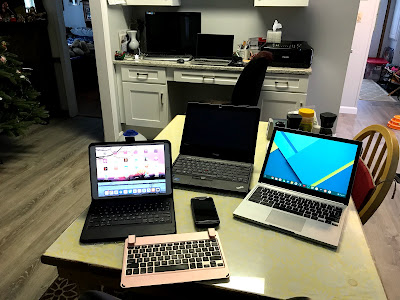 This year I have bounced between my iPad Pro 10.5 with three different Bluetooth keyboards, Apple iPhone 7, Nokia Windows Lumia Icon 929 (on a lark), Kyocera DuraForce Pro (the camera sucked), to an old Lenovo 2011 ThinkPad 230T that I have upgraded considerably. Along with a couple of Linux laptops and multiple other computers that I help to keep up and running around here.

In November, I found out that my iPad Pro’s battery was and still is not doing all that great, plugged in it works fantastic. Unfortunately, for what it costs to get it replaced, I can get a very nice new computer. While the iPad Pro has done what I need, I am not completely happy with the Bluetooth keyboards that I have to use compared to a dedicated keyboard. There is lag and keystrokes do not always register, which slows me down when I am typing, frustrates me when it happens and it happens all too often.

How IOS works between my iPhone 7 and the iPad Pro has been nice, but as good as it is, when I need to use a non-Apple device, the Apple silo raises its ugly head and creates too much friction to whatever it is that I want to do on my other devices.

At this point, my in-house options were going back to my 2011 Lenovo with the bad screen (the little white dot in the lower corner continues to keep growing larger), play on a couple of old Dells that have Ubuntu/Mint on them or attempt to resurrect a 2014 ASUS with a questionable motherboard. Not really too many real options for a primary computer going forward.

Since I was more or less in the Apple silo that was really my first choice, but when I got looking around the Internet for a used Mac (Air, Pro or Book), a new one was not an option at over a grand as a starting point. The pricing was still in the $600-$700 range for a 2015 Mac in good condition. Which to me is still pretty steep for what I actually do on a computer since I retired.

So that avenue really wasn’t a viable option.

Then I thought about going all-in with Microsoft, but no dedicated phone and my experience using Windows 10 on my Lenovo as my primary computer, has reminded me of the many things I don’t like about Windows-based computers. While my experience was better than it has been in the past, there are too many things that just feel clunky, I tend to get too far into the weeds with the settings (I know more than enough to be dangerous) and I wasn’t all that thrilled about being back in the Microsoft silo. Though the wife likes it, so I will never be free of it completely. 🙂

This really hit home when I was working on a blog post one morning and suddenly my Lenovo went into update mode. Now I am savvy enough that I had set all the settings so that auto-update wouldn’t happen during the day – at least that is what I thought. Needless to say, I was just a bit frustrated by the whole thing and any thoughts about getting a newer Windows machine was DOA after that little episode.

Linux is a lot better than it used to be, but it is pretty much a last resort kind of OS for me. I can use the Terminal when I have to, but I am looking more for a turn on the computer, use it the way I want and not frig fart around with a bunch of back-end or under the hood management stuff.

This meant that I had to suck it up and pay the price with Apple or moving back to Google, which I had left due to security and privacy concerns when I got the iPad Pro a couple of years ago.

My biggest concern about Google has been and always will be that I was, am and will be the product.

The main purpose of their “free” services are more about enticing me to voluntarily allow Google to collect my personal data to ensure that they and their advertisers have access to information to help sell me stuff that I “need”.

However, I am rather cynical in my old age and tend to believe that all the major tech silos, brands, and corporations collect our personal data, use it for their own purposes and other corporations, entities, and government agencies have more access to that data than we know or the companies would like us to believe. No, I am not a conspiracy theorist or anything like that. I just don’t believe that I am all that naive about how much of our personal information is being collected, shared and used.

However, like I learned a long time ago if you use the internet or GPS device, hell just walking down a street in most cities and towns you do not have any privacy. With those thoughts in mind, I figured that I might as well go with the suite of products that I am most comfortable using and works best for my current needs and not my ego.

When I honestly took a close look at how I use computers today versus how I used to use them. I found that my computing needs have changed completely over the past 3 years and the idea that I need the same things a power user does is no longer the case.

Also, I have owned three Chromebooks and worked at a college where I did everything through Google products and knew the way things worked pretty darn well in the world of Google. I just had to get myself back up to speed with some of the changes that had taken place over the past couple of years.

The idea of moving back into a Google-based tech silo was a lot cheaper, probably almost as easy as setting up another Mac and the more I thought about it, the more I decided to test things out, before making a final decision. So for most of December, I have worked on moving things to a Google-centric technology base.

For me and how I do things, it was an easy switch back and whatever device I am using (it doesn’t much matter if it is Microsoft, Apple, or Linux, I have the same documents/spreadsheets/bookmarks. There are a few things I that I tend to go Mmmmm, let’s try that differently, but for the most part, the move back has been pretty dare I say easy.

So that is how I got back in the Google silo.

Based on that moving experience, I decided to get a used Google Chromebook Pixel 2 (2015) with the i7 processor and 16gb RAM for a fantastic price earlier in December and put it under the Christmas tree as a present from Santa. It was the computer that I really wanted when it came out, but at $1299 was simply too expensive. At this price and with the improvements to the Chrome OS and being able to use Android apps, it is more future proof than a used MacBook (line) would be, even though its end of life support with Google is in 2020. 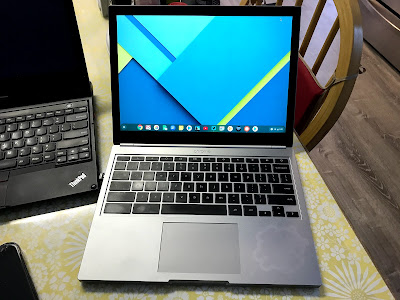 Yeah, my tech life has had a major upheaval, but in the long run, I believe that it will simplify my workflows and work better with how I use technology now. Although at some point in the next year, I foresee a Pixel smartphone replacing my old iPhone 7, which is getting long in the tooth but still works pretty well for me even with most everything else being Google based. Google apps almost turn it into a Google phone with better security and updates-almost.

Let’s hope that on the tech front 2020 is a nice and boring year, where at the end of next December, I simply say – I stayed with Google all year, didn’t have any major meltdowns and love my Chromebook Pixel 2. Which after 6 days, I can say I am loving at this point.