Well, I woke up with the usual pounding head that seems to be my wont in life when a storm is coming our way. Yeah, we are supposed to get whacked with some ice and snow again, so I get to do the prep work for that…always fun, but necessary to be prepared. That Semper Paratus thing that was drilled into my head for over 20 years, I guess. 😉

Even so, it was pretty chilly for both the early and long walks with Bennie, but that Northwind is supposed to keep the biggest part of the storm to the South, so it would be nice if the snow stopped somewhere around Augusta and all we get is a dusting. Fat chance, but a guy can dream – right. 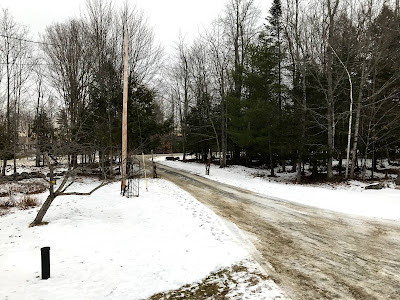 I was all ready to head to the gym, to do a faster workout, when my wonderful wife informed me of a change of plans. We were going to do our shopping this morning, picking up SD2s vehicle and then I would be picking her up from work later. Not that I mind terribly the change of plans, I usually do play chauffeur in bad weather, but that meant completely changing around my running plans – oh boo hoo!!!

That meant that I wouldn’t be heading to the gym as planned at all today and that I was going to have to run outside doing mile laps out in front of the house. At least the roads were still clear until just as we finished running. Yeah, the wife was out there also, doing her mileage in the cold.

I did 5.0 miles at an easy pace for 4.0 miles and picked it up a little during the last mile. In that kind of cold, I really do not attempt to run hard, even after I have warmed up because it is still too easy to pull a muscle or something. As one runner puts in his running log – Just another easy run.

After eating a quick lunch, Bennie and settled in for our afternoon nap and the next thing I knew SD2 was texting me letting me know that I had 25 minutes to go pick her up since they were closing early.

It takes 20 minutes to get there on a good day and today’s freezing rain wasn’t what I call a good day.

I got there safely, if a couple minutes later than closing time.

What did I read today?

Everyone Around You is Grieving. Go Easy
Quick Tips: How to know if you need wide shoes
How Disinformation Hacks Your Brain
Reebok Forever Floatride Energy SmackDown – 2.0 vs OG
2019 Running Review – Omni Running
Speed Work: Do I use my actual paces or equivalent?
Can Johnny Come Out and Play?
Brother Steps In
Winter Solstice, Feeling Different…and is Aging So Bad?
Winter Solstice
My 2019 Year Rehashed
A Face at the Window
How Does the Brain Organize Memories Across Time

That is the best thing about my life now if I need to be flexible with my day, I can be without having to go through giant gyrations to get things done. Although I gotta be honest, I would have preferred to do the treadmill speed workout than my run outside in the cold and wind, but I got the miles in that I wanted.

Originally posted on Aging – My Thoughts and written by Harold L. Shaw. My daily adventures and thoughts about what is going on around me.