Since it is snowing pretty good and I am going to have to play with the beast (snowblower) for two to three hours this afternoon, I don’t anticipate getting another run in during what is left of 2019. So while I am waiting around for the snow to end, I figured I might as well finish up this post.

Running in 2019 was all about running consistently and figuring out where I want running and life beyond running, to take me in the future, after 8 years of having been so focused on “being a runnah”.

We had a lot going on in our lives and our schedule in 2019 was not one where my running could be the priority it had been in past years. This meant that I had to focus more on consistently getting my runs done and not worrying about whether my training resulted in racing much if at all.

Even though I had a stress reaction/fracture back in June from my making a training mistake. I mostly ran well and was able to enjoy my running more than I have in a long time. No stress about having to get ready for this or that race seemed to help a lot. 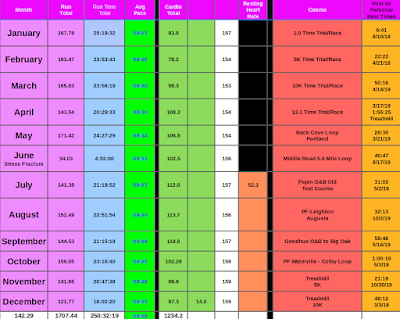 Even so, I managed to get over 1,700 miles in for the year and other than June surpassed 100 miles each month. This was my best annual total since 2015, so I am still making some progress, though I have a feeling that I am slower than I used to be.

That part of getting old thing raising its ugly head again. Yeah, I struggle with that idea every so often, but it beats the alternative. 🙂 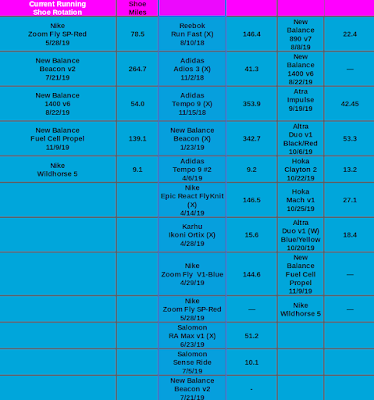 As usual, I ran in too many running shoes, but I think that I have pretty much solved my gotta try the newest, greatest that I see in various running blogs or on my Facebook Shoe Geeks group – attitude or is that addiction. Plus those running shoes that I see where I gotta buy that great deal on eBay or Amazon.

My shoe of the year was the New Balance Beacon v1 and I put more miles in the Beacon line than I did any other shoe. I learned a lot about what I really want from my running shoes and even though I did get off on some tangents I kept coming back to New Balance shoes because they fit me the best and I run comfortably in them.

Although Hoka One One, Asics and Saucony are coming out with shoes in 2020 that really intriguing, However, when I am honest, I haven’t had much luck with the actual fit in my hard to fit the right foot with those brands.

The one thing that I didn’t do very much was running in races this year. I trained as though I was going to run a 5K or 10K at any time during 2019, but due to so many factors, despite having plenty of opportunities, I never really got around to racing.

One race the entire year, but with everything going on, it just didn’t seem like the right thing to do, so I didn’t. 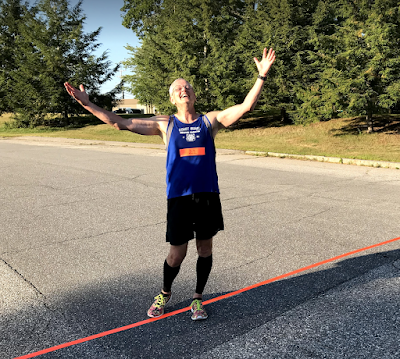 However, this is something that I want to change going forward and while it will take some juggling of schedules to make it happen, but I want to accomplish a couple of things and racing is the only way that I can do that.

The biggest thing I learned in 2019 about my running is that wearing trifocal glasses that transition to very dark lenses, does not work well when running trails or dirt roads. They might be great for snowshoeing or walking in bright sunshine, but I can’t see worth a shit and have zero depth perception when I am running in them. 🙂 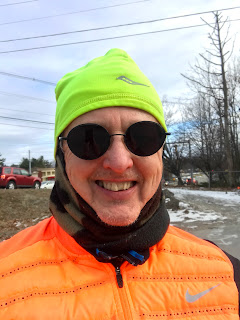 Overall, my running in 2019 was really good. I ran consistently and only got injured in June because I was getting greedy and seeing delusions of grandeur on the horizon. The injury brought me back to reality, slowed my arse down to where I should be and the rest of the year went well. In December I decided to rest, recuperate (mentally as well as physically) and ran simply by how I felt. Which didn’t mean that I didn’t do some fast running, it just meant that I ran how I wanted.

Although I do have to admit that I struggled with how much harder it is to maintain the faster speeds that I “think” or believe that I should be running. That not wanting to admit how much aging is starting to affect the old body and how fast I can run.