The Pareto Principle and Re-Organizing My Tech

This morning I was reading a blog post from the Farnum Street blog on “How to Remember What You Read” and it had a small section on the Pareto Principle. For the life of me I couldn’t remember what it was, so I went down into the Pareto Principle rabbit hole for a while.

Yes, I had heard of the Pareto Principle before but had forgotten what it was actually about (it has been a few years since I had thought or read anything about it). The quick definition would be:

that “80% of results will come from just 20% of the action.” which I copied from here

When I got to reading a bunch of the different links that I ended up following it got me to thinking about how I could use Pareto thinking to weed out some of my technology duplication, mindless additions, and apps/software on my phone or computers that no longer serves any real purpose to my daily life.

Especially, since I have retired and no longer have to worry about a lot of things that were part and parcel of the world of work.

When I got to looking at my old iPhone 7, I was pretty amazed to figure out that I had so many apps on it. When I stopped and looked at my menus it was rather overwhelming about how they were organized (more accurately – not organized) or if I even used/needed them.

The Principle worked pretty closely to form and I really only use about 20% of the apps that were on my phone. 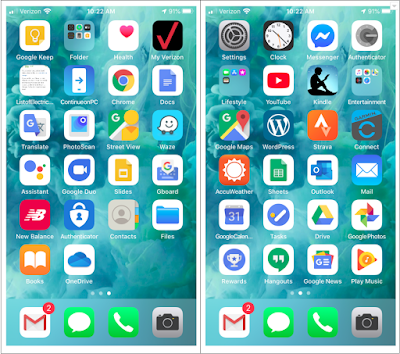 Admittedly, I am still in the process of moving my tech silo from Apple’s offerings along with a smattering of Microsofts over to Google’s so there are more here I usually keep on my phone. However, this would be a great time to get rid of some of the overlap and apps that I really have never used and probably will not now that I have changed things up again.

Here is what the same iPhone 7 looks like after taking a closer look at what I use and need. 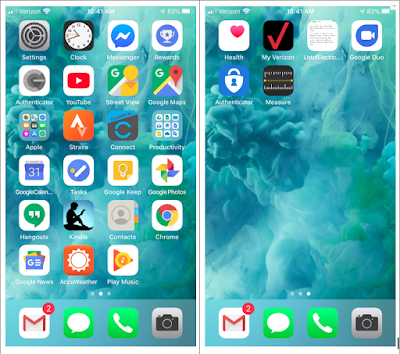 Quite a difference in my mind.

I can’t really get rid of some of the Apple apps and I do use Microsoft’s Authenticator a bit, so I kept those. I really didn’t need three mail apps and since I got rid of my subscription to Apple Music and use Play Music for everything now, so why bother keeping it when all it was doing was just taking up space.

Really, I could probably get rid of Google Docs, Slides and Sheets and just access them through Drive, but I will wait a little while on those to see if I do use them or not. I don’t really use tasks all that much and have never been much of one to use an online task management system, but I have a few things that repeat and I don’t want to forget them so I will keep it around for those times.

So I made some progress on organizing my phone and mostly have the apps I use or need on it. While I see a couple more areas that I could create some folders, I will leave things alone for a few days to see how these changes work for me.

I will probably do the same thing on my iPad Pro, Lenovo Thinkpad 230T and even my new Chromebook which has some stuff that I really don’t need hanging around over the next couple of days just to clean things up a bit.

All I can say is going down that little rabbit hole and re-reading about the Pareto Principle did make me stop and go down a different rabbit hole of my own to see what I could streamline, get rid of duplicates and stuff I just don’t use anymore on my iPhone 7.

Who knows maybe when I upgrade next time it will be an Android phone and I won’t have to worry about the Apple apps anymore.

I will figure things out I am sure.

What about you, what things or processes in your life are affected by the Pareto Principle – that wonderful 80/20 rule that are different now, but you haven’t done anything about them? Can you streamline any of them so that you focus more on the 20% of things you actually need or use?