Sometimes going against the grain, works to my advantage and I have a feeling that might be the case this time. 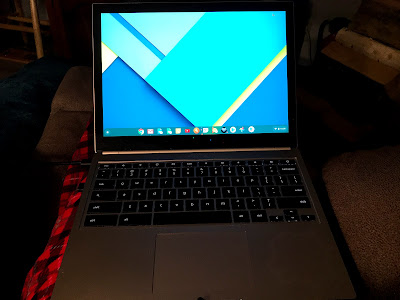 I needed a new primary laptop because my iPad Pro’s battery is not doing well and to replace the battery (it works fine plugged in) would cost more than many new computers would cost. Plus I wanted something with a real keyboard so typing is not a chore like it is on the iPad’s Bluetooth keyboards – let’s just say I am not a big fan of the three I have used so far. When I prefer using my old 2011 Lenovo ThinkPad 230T for typing, there is something not quite right in my opinion.

After doing a LOT of research, thinking about how I actually use a computer now that I am retired and the costs involved, I came to a surprise choice.

Apple’s offerings start at $1,000 or new for a laptop and if I am honest that is more than I am willing to spend every 3-4 years to stay in their tech silo. Windows 10 machines, can be powerful and do more than I need, unfortunately, my recent experiences with it are that there is just something to about it that just doesn’t thrill me as an operating system. Linux is still too reliant on the terminal and command lines for my taste, although it is getting better.

I wanted more of a plug it in, turn it on and start using my laptop experience and have my other devices no matter what tech silo they come from – have a fairly frictionless experience to get to my data or information.

For Christmas, Santa brought me a Chromebook and I am very happy about it.

After all, it is what I asked for over something MacOS or Windows-based.

Now, why on earth would I ask for a Chromebook when I could have had a “real” computer?

Actually, a Chromebook is a “real” computer despite what some of the pundits might say. ChromeOS is a locked-down Linux distribution, which now has access to Android Apps and other Linux-based software.   If you have a newer Chromebook that is authorized, my computer does not have access to Linux software.

A Chromebook will do everything that I do on a computer at this time.

So what do I do on my laptop?

Browse the web, shop for stuff I really don’t need, read news and blogs, check email, Facebook and Twitter, listen to music streaming or my playlists, podcasts, watch some videos and movies, use a spreadsheet, write blog posts, do some very minor photo or video editing, and play a few games.

All things that are right in the Chromebook’s wheelhouse.

Another factor is that I tend to sign in from several different devices over the course of day or week and having the ability to have my work and profile available to me whatever device I am on, without a lot of friction is a big deal to me. It probably is the biggest reason why I chose to go with the Chromebook and Google.

Yeah, I know what about privacy and Google’s reputation. I have a feeling that I will address those questions/issues in a future post and how they relate to us older folk, but the simple answer is if you go on on the Internet, carry a phone/smartphone, walk down a city street, go in most stores or use a GPS device, you do not have privacy. You can plan on someone somewhere, some machine or network is monitoring and recording your activity. For the most part, we don’t know who it is, what information is actually collected or how it is or will be used.

Unfortunately, it is part of modern life (the lack of personal privacy) under present laws, regulations and business practices. At least with Google, I have an idea of what they are doing and if I take the time to read their privacy statements and terms of service it is pretty clear – I am the product and in exchange for me being the product I use their services for “free”. Not the best deal in the world, but at least I know they are doing it and I am getting some benefit out of their data collection efforts about me.

About the only thing that I can’t really do on a Chromebook that I normally do is play Never Winter Nights 2 (I couldn’t on my iPad Pro either and lived without it – though I did whine a bit) and I could probably figure out a way to do that if I get really motivated now that I can download Linux software. However, I can play Never Winter Night #1 and it looks great, so I can fulfill most of that need this way.

My days of being a power user or wanting to get deep under the hood of an OS are pretty much over. I just want to turn my laptop on, use it, not worry about having to keep frig farting around with settings and all the other systems admin stuff that goes along with other operating systems. I have been there done that for too many years and don’t want to deal with it any more than I have to.

So for how I actually use a computer now, the Chromebook will work just fine for me.

I have owned two Chromebooks before and know from personal experience the limitations of the Chrome OS, which I mostly liked even when I had other priorities or needs. Also, over the past month, I have been moving to Google’s services on both IOS and Windows, while doing research on the changes that have taken place since I got rid of my last Chromebook in 2017. I have learned a lot and Chrome OS has come a long way.

Thinking about it, I haven’t had to go outside of the Google Silo for anything that I would be doing on a Chromebook for a couple of weeks now. The stuff that I went out of Google’s silo for was more system admin stuff that I will not have to worry about on the Chromebook.

I have been using Google’s products off and on since they started rolling them out 15 or so years ago (it doesn’t seem possible), both as a teacher and admin specialist and find that most of the time things worked within the Google tech silo the way that I want them to.

So I am back in the Google silo once more.

What Chromebook did I get?

Finally, I am going to talk about which damn computer I got.

YEAH, the i7 version with 16gb of RAM and 64gb hard drive, with actual ports, a keyboard that is top-notch and a screen that would still be near the top of the class if released today. My concerns will be the small 64gb hard drive, but I can plug in a good-sized SD card to take care of that issue and battery life. If I need to change out the battery, it might be a pain to do, but is not ridiculously priced and I have a feeling that I can probably manage the change out.

It is a laptop that I really, really wanted when it first came out, but I couldn’t justify the $1299 price tag. I was able to get a deal on it for just over $275. Which I thought was a pretty good deal for a computer that I have wanted for a while and have been watching the prices come down on for a couple of years.

I have used it for a couple of hours now and it has impressed me tremendously. The LS is well-named as ludicrous speed. I love being able to use Android apps and it took me about 20 minutes to get things updated and set up the way that I wanted the computer. A lot different than my wife’s new Windows machine which took over an hour to get set up and updated. I still have a few things left to do on hers and with my Chromebook, it is more about just using it.

Yes, I do know it is coming up on end of life soon, but at the same time the hardware is hard to beat and if Google stops updating it completely, eventually I will probably turn it into a Linux machine and keep smiling – the specs are that good.

I am excited about getting my Chromebook and seeing what it can actually do. Although after only a couple of hours tonight, I am sorry that I wasn’t able to get it back in 2015. I know that putting it under the Christmas Tree was a tough decision, but the correct one. It forced me to do the prep work I would have ignored or had to do on the fly once I started using my new Chromebook which made the transition that much easier.

Now that I have it up and running, it is time to see if my initial impressions about what I think about my Google Chromebook Pixel 2 LS is correct or if I am way off base.

Hopefully, Google decides to extend the end of life for this Chromebook, it would be a shame to stop supporting such a wonderful computer.

I will find out.