Often we overlook the things we do daily as simply routine and nothing special. Today I stopped and stepped back to take a look at my day from a slightly different perspective than usual. I didn’t focus on oh crap I gotta get this done and then I have to do that as I jump from hoop to hoop to hoop throughout my day. I purposely looked at it from the idea that I get to do this.

What a difference a slightly different perspective made in how I felt during the day.

When we got up at 6:20 AM, I chose to wear clothes that I haven’t worn in a while, then while doing my almost mile first thing in the morning with Bennie, instead of putting my head down and forcing myself outside. I got geared up, out the door and actually looked around for a change. As a result, I did notice some new tracks made by the coyotes, pretty spectacular sunrise and the reasons why Bennie does stop at certain places on most mornings. 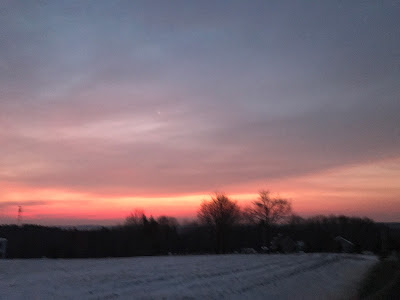 During breakfast, I turned off the TV, I really didn’t need to listen to ESPN droning on mindlessly in the background and went through my morning reading routine without the background noise. I found that I enjoyed the articles more and actually thought about them versus my usual oh I read that…well sort of kind of reading.

After doing some chores around the house, during which I thought about a couple of the articles I read, one bothered me a lot and I am not sure why, but while it seemed jumbled and disjointed, it made sense on why the author presented the information in that manner, although the point hit too close to home. I will probably read it again tonight to see if another reading helps me understand why it bothered me so much.

Walking the dogs on their long walk was not all that much fun this morning. I still had that article on my mind, Hunter was being particularly putzy and I wanted to get back, so I could go for a run. However, down on the flats, we encountered a very strange, almost skunky smell, that made the hairs on the back of my neck stand on end. Whatever it was, put me on high alert and the dogs were not all that happy in that area.

Nothing happened, but there are times when walking in nature that when that happens, it is best to trust your instincts and stay alert to what is happening around you versus closing yourself off to what nature is trying to warn you about.

Once we got back I headed into Augusta for a run. I didn’t feel like running down-back, but the weather was too damn nice to be stuck on the treadmill. I will know that I will be doing plenty of time on it, so whenever I get a chance on a nice day, I head outside for my run.

I planned on doing 5.0 or so and decided to do the Planet Fitness-Leighton-Commerce Center 5.0 mile course. The run itself was pretty routine and I focused on just enjoying the run. Which I did until I was coming back out of Leighton and had to make a pitstop at the bus depot – no choices on that.

I was pretty amazed at the amount of traffic on Outer Civic Center Drive and was glad that I didn’t drive in it, but it even though it is against the law to drive and use a handheld device (i.e. smartphone) several drivers was still doing whatever with their phones. On more than a couple of occasions, I had to move over onto the grass portions because some idiot was over the white line and in the breakdown lane while on their phone. At least I was not wool-gathering and stayed focused on what was ahead of me. Surprisingly, even though I muttered under my breath a couple of times, what the drivers were doing didn’t bother me all that much. It was more me thinking about how stoopid they were and that I just needed to keep aware of what they were doing.

Then Mary and I decided that we would head into Augusta to do our usual Monday shopping expedition to Sam’s Club and Tractor Supply. It wasn’t as bad as I expected, but people were driving like idiots, but instead of getting all upset by their actions, I just let things go, nothing anyone was doing was worth stressing out over.

The rest of the day was pretty good and more of the same. However, my purposeful change of perspective about how I would react or look at things did make a huge difference in how I saw, what I saw and reacted to the actions by others. I was more positive and a helluva lot less stressed than I usually during this time of year.

Maybe being a crotchety old bastid is not the best way to go through life. Not that I really am all that crotchety, but it was a good reminder that a positive attitude is a good thing.

What articles did I read today?

Why Your Brain Needs Exercise
The Flag in the Whirlwind: An Update from CTs President
Winter Running Tips from the Coldest Places on Earth
The Gift of Hope
Stop Saying Driverless Cars Will Help Old People
Langford’s Comfort Level Rising After Productive Weekend
Raymond Briggs: Everything takes so bloody long when you’re old
34 Best Body Weight Exercises
How Mental Models Unlock Your Thinking
The Art of Dying
The Smart worker’s guide to using a Chromebook offline

A lot of interesting reading and The Art of Dying was the one that bothered me in many ways. I will be re-reading this tonight and trying to decipher why it affected me so much.

Actually a really good day and one where I learned or should I say experienced the reason why having a positive attitude is so important at any age, but especially as we get older and seem to have less patience than we used to.

I guess it is appropriate to also show the sunset from this afternoon since it was pretty spectacular also. 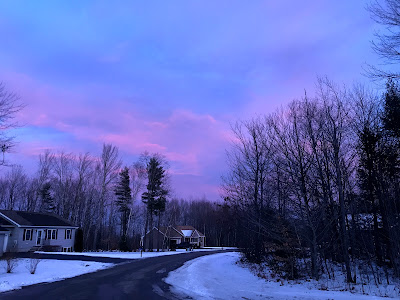