After walking Bennie, I originally was going to go into Planet Fitness and play on the treadmill, just because it was pretty darn cold outside. However, it took a little bit for Bennie to warm-up after the walk (I tend to sit with him until he stops shivering to ensure that he is fine). Then while I was waiting, Mary went outside running. This meant that I really didn’t have a big reason not to run outside – that spousal pressure thing, Dontcha know.

Comments: I really was not sure of how far I would be running today due
to the temps, down-back was passable, not fast runnable, but as long as I
paid attention to what I was doing, it was runnable. 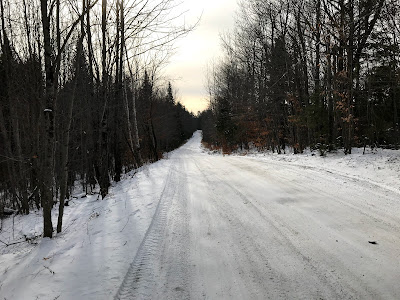 So I figured that I would play it by ear until I got down to Wildwood and see how everything felt. No issues there and I decided to keep running down to Notta Road and turn around there. Even though I was running comfortably, I never really warmed up and thought that at that point it would be a good place to turn-around.

Going back I did pick up the pace slightly, but nothing serious, I was feeling good and it still felt easy. However, when I got back to the snow/ice-covered dirt road, I slowed back down, just for safety’s sake.

One thing that I am working on is not looking at my GPS watch while running my easier runs. I want to go more by feel and relax during the run versus attempting to meet some artificial pace that doesn’t take into account how I am feeling that day, the road conditions or weather.

Overall, the run was a nice easy run where I got some miles in, felt pretty good and while I didn’t do a longer run, it felt good even if it was a bit chilly.