Another one of those good days for running, when I got out the door. Lower 70’s decent humidity and believe it or not a light rain with the sun shining for the first 2.0 miles. Weird, but nice.

I finished up The Happy Runner book last night and have decided to incorporate a bit of what they seem to recommend for improving my running/training. Their ideas go along with some of my own thoughts on running and there seems to be more agreement on the benefits of doing strides from several other writers as well.

From the perspectives that I have read and experienced, strides do seem to help more with improving running form/efficiency than consciously attempting to do so, by doing many of the “methods” that I have attempted over the years.

Also the other thing that I want to include that was recommended is Coach Jay Johnson’s Lunge Matrix that I have started a few times in the past, but my leg strength is not up to doing lunges. Along with some other pre and post run exercises. So now is the time to get the legs up to the task and see if that helps with some of my leg issues. 🙂

While I am getting in decent shape, I do know that I am not in racing shape by any stretch of the imagination. Who knows I may never get back in what I consider racing shape, but it doesn’t mean that I can’t go to a race. Mostly to see where I actually am and to get out of the zero for 2019 as far as racing goes.

So I signed up for the Sunset 5K in Brunswick next Thursday evening. It will give me a nice checkpoint of where I am and not be a major deal to contend with. I am looking forward to it and getting back down to the old Naval Base, where I used to live in the CPO barracks and run after work.

This morning’s run was a two-parter.

Part 1 – I worked hard at running easy for 5.0 miles. I did enjoy the light rain, but I kept wanting to speed up, so I had to purposely run slower. I wanted to get over a 9:30 pace and came pretty close by averaging a 9:28, so I was able to do what I wanted for the most part.

Part 2 – I stopped and changed shoes to do 6 x 2 telephone pole strides. Yeah, I put on the NB 890v7 to do the strides, I am attempting to make them into my go faster shoes and only wear them when I am going to run faster. An easy lap around the Circle to get used to how the 890s feel, because there is a difference from the Beacon 2s. Then doing 6 x 20 second strides (at least they will be when I get back in the shape that I want).

The first one was getting the feel for how the 890s run at faster paces and then I ran faster, but not all out. I was working more on running efficiently and actually came within a second my segment record a couple of times without really pushing to go faster. It almost seems as if I need a firmer shoe to go faster.

My Zoom Fly SP and v1s are quite soft and while they have a plate in them, I don’t feel as fast in either of them as I do in the 890s. Maybe the ZFs will become more of a faster trainer moving forward. I will know better after Tuesday’s track session.

I am a bit torn though on the Zoom Fly SP, because I do run well in them, but 890 do feel…well better and different – all at the same time. I really can’t explain the why right now other than ever since I tried them on the other day, I do want to run in them — even if they are fugly. 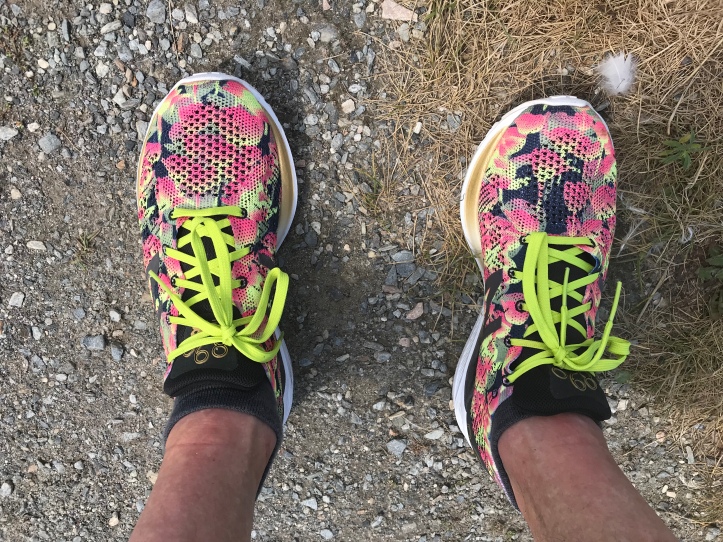 While I love bright colored shoes, the 890 are weird colored and the colorway just clashes with my eyes. Oh well, if I run well enough in them, I guess the color doesn’t mean crap, but damn these are just so…off.

It was a good day of running and I did what I wanted in both parts of the run. Plus signing up for a 5K feels good and not the least bit intimidating for a change. It will be interesting to see how I feel come Thursday.