A Bittersweet Kind of Day

This post has nothing to do with running. It is more about the reminiscing and meandering thoughts of a Dad, who doesn’t know when the next time he will see his daughter, thinking about what happened on June 22nd forty-four years ago and then driving around the town where I grew up.

First and foremost on my mind was how much I will miss D2 and her husband. Today they headed back to Minnesota to collect the grandkids from his mother and resume their life. However, before they left my Dad and I got to enjoy a great breakfast with them at the Irving Truck Stop in Newport.

Yep, I will miss them, but it was great being able do things and make some great memories with them this week.

I don’t have too many possessions in this world that mean anything to me or are legacy things that I want to pass on to my descendants or things that they would want.

However, there was one last thing that does mean a lot to me and that is my U.S. Coast Guard Officer’s sword that Senior Chief Roger Putman gave me on my commissioning as a Warrant Officer.

Nobody knows what the future holds or how long anyone has on this little blue marble, so I wanted to ensure that my daughter has my Coast Guard Sword, when I do leave it, hopefully in about 30 years.

After I did it, I had no doubt that it was the correct thing to do.

After I dropped off Dad at his house, I headed back to Newport. I was feeling kind of down and wanted some time to be alone with my thoughts.

Along the way, I remembered that forty-four years ago today, was the only time that I can remember my family had a quasi-family reunion (most of the grandparents, aunts, uncles, cousins and I think a few friends), at the house on Elm Street for a BBQ. It was also my going away party, I was going into the Coast Guard the next day.

Someplace there is an old Polaroid photo of all of use in the back yard, but I haven’t found that picture for years.

Even back then it was a bittersweet day, but at the same time, it was also the start of some big changes in my life. I was going from being a recent high school graduate with delusions of grandeur in my mind to do something that turned into a career.

When I got back to Newport this morning I stopped at the Legion beach, where I spent many days growing up, some things were good memories, first kisses, other firsts, foot races, sneaking out at night on sleepovers, maybe some clothing optional swimming, in other words just being a kid growing into a teenager.

Other memories were not nearly as good. Like the time I almost broke my neck diving off the warf, almost drowning over by the dam, fighting with bigger/older kids and some other misadventures that I survived made me think about how lucky I was growing up to be here today.

A lot of stuff happened on that beachfront.

I sat on my rock (yes, the same one that I have sat on and done serious thinking over many years) and just thought about how far I have come from that pint of piss who always seemed to have a chip on his shoulder and something to prove to everyone else, but really it was to me.

I don’t really know if I have changed all that much sometimes, but the chip on my shoulder ain’t nearly as big as it was. I think that the biggest change is that I am pretty comfortable in my own skin at this stage of my life.

As I drove around Newport, I drove by the Little League field and a game was being played. I sat at the stop sign for a minute and got to thinking about Birdie Tibbets who coached me for a couple of years, the games and how we used to play pickup games there all the time. I got to thinking about all the kids I used to hang around with there and wondered how their lives turned out.

When I drove by my Nana and Grampa’s house, another flood of memories came winging through my head. Mostly good memories there, it was where I actually spent most of my days growing up. The house has been sold out of the family and the house no longer looks anything like the home that my grandparents had, but…well when I was growing up, it was my real home.

I eventually ended up over to the school.

When I got there I walked out on the field where I scored my only soccer goal, played baseball and softball and looked out to where the path used to go down to the Oil tanks and the short-cut to Nana’s house. I looked out over what used to be field and how I shot at a deer off that field, no I didn’t kill it – I missed. Today, if brought a gun on school grounds I would be in jail, back then it was just part of growing up, after all I was just hunting. 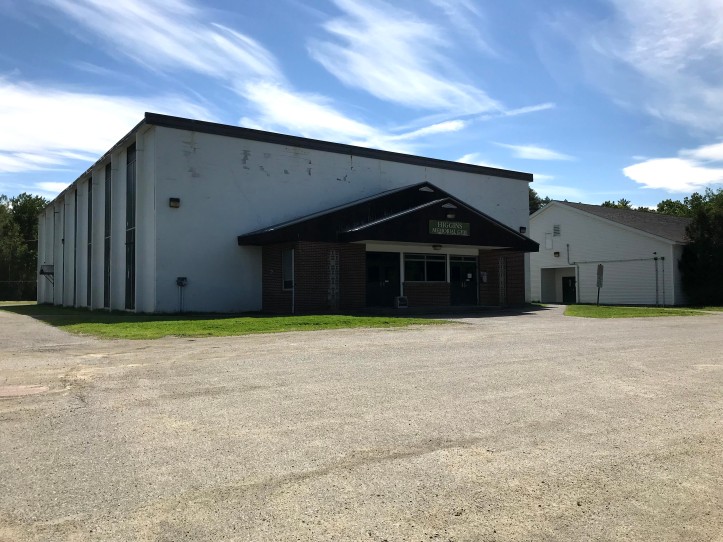 Then I got to looking at the Higgins Memorial Gym. Named for Dr. Higgins, who was the family doctor until he retired and keeper of many secrets in our little town, one of which I am glad never happened.

I played P.A.L. basketball in that gym 4th to 7th grades for Lyle Seavey coach of the Newport Bullets, until I acted like an ass during a game and my dad forced me to turn-in my uniform that night. It was one of the longest and toughest walks I ever did, but I did it by myself. One of my not so brilliant moments, but I did it by myself and learned a lot about having to do something I really didn’t want to do.

School dances, I didn’t miss any of them, the chance to slow dance with some of the girls was too tempting. Hormones were a driving force even back then. Then I remembered one summer working for the school district and painting the school and gym. It all looked much newer then.

Looking at the gym and the school buildings today, they look a lot like me, time has passed us by and we are looking a bit worse for the years that have passed us by. 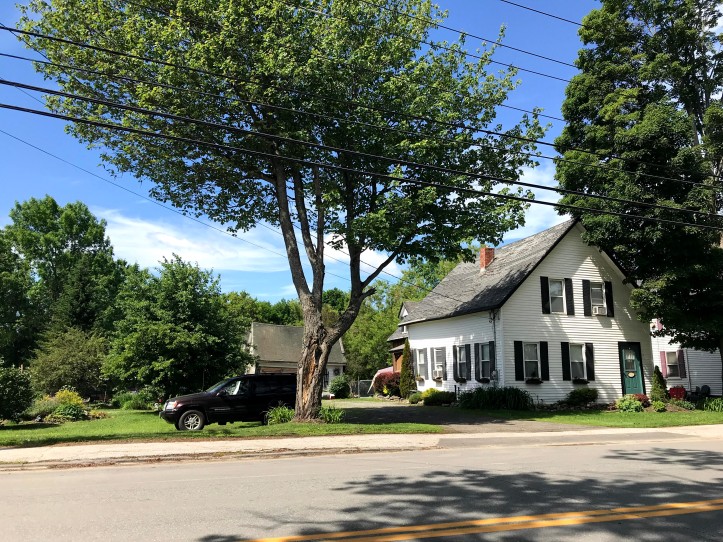 On the way back up Elm Street, I stopped across the street from the house where I spent the most years – we moved an awful lot until we moved into this house. It was originally my great-grandmother Bertha’s and in the late 60’s we moved in. There are so many memories in that house – good and bad, too many of both to write about. The new owners are starting to make some good changes.

It was kind of fitting that the waitress at Irving’s this morning is the sister of the person who bought the house and they lived down behind us for many years. However, in many ways, it is sad that it is no longer in the family after having been in the family since the 1930s. Change can be hard and sometimes I think I would have liked to have walked through the house one final time, but then again it probably was just as well that I didn’t.

I guess in many ways I want to remember it more the way it was as my parent’s home, not my brother’s. Too many memories in that house.

After that I stopped at the new library and Newport Museum. The museum wasn’t anything special, but I did buy a book on the History of Newport and spoke to the librarian for a couple of minutes.

When I got home I read it and took a real trip down memory lane. It was pretty strange seeing the family surnames that I grew up with being in Newport from the 1800s, including my own.

People didn’t really move all that much and generations were born, lived and died in that town or close proximity.

The Reality is That

Today was a bittersweet day and one where I got to say to my daughter and her husband, “until we see one another next time”.

But I did get to spend time with them this week and again with my Dad this morning. We made more great memories that I will have with me the rest of my life.

Sometimes I do wonder how much my life would have been different if I had stayed in Newport and not joined the Coast Guard.

June 22nd seems to be a day in my life where I get to say “see you later” to people who mean a lot to me. Only this time the numbers were a lot fewer. It seems that family is less important than it was back then or it is that we simply have gotten so busy and our families so splintered and have so little in common anymore that we don’t make time to take the time to be a family anymore.

All too often, I think that is the case. In many ways it is pretty sad, but it is what it is and unfortunately, I don’t see us going back to the “way it used to be”. 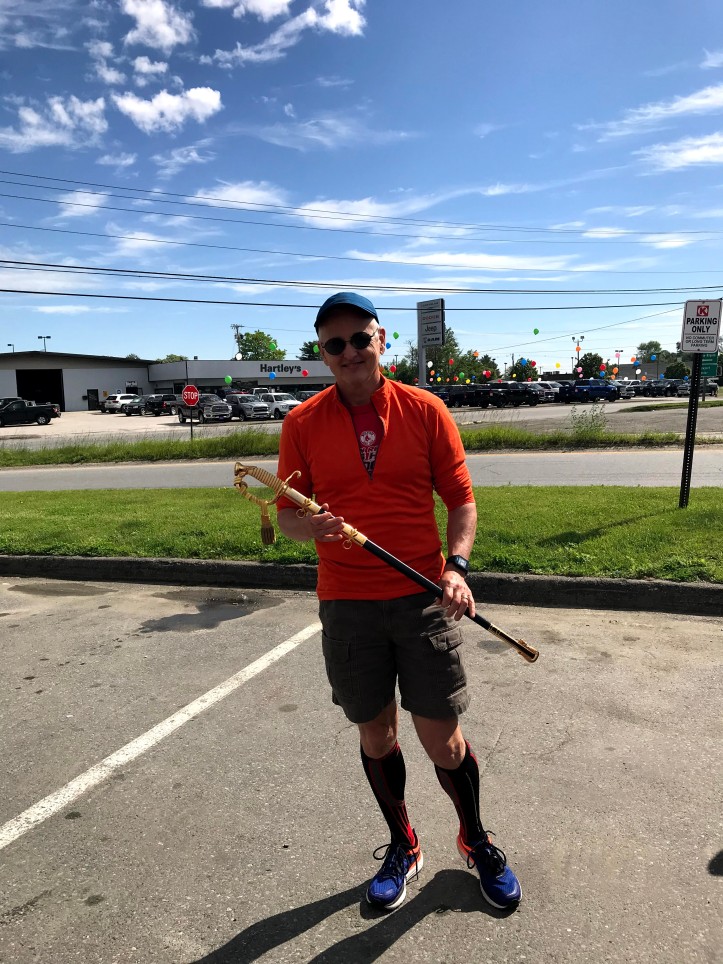 Thank you for putting up with the meandering thoughts of an old fart, who has way too much on his mind tonight.

My sword has a new home and it is where it is supposed to be now.

Now back to the life I do have and you know something it really is a damn good one.