Some months just are. That is about what I thought about May 2019 – it just was.

I ran decently, got my technology under control, dunk tested my iPhone 7, ran regularly with some other runners, figured out my running shoe rotation – at least until the next whim hits me and continued to whine about the weather ad nauseum. 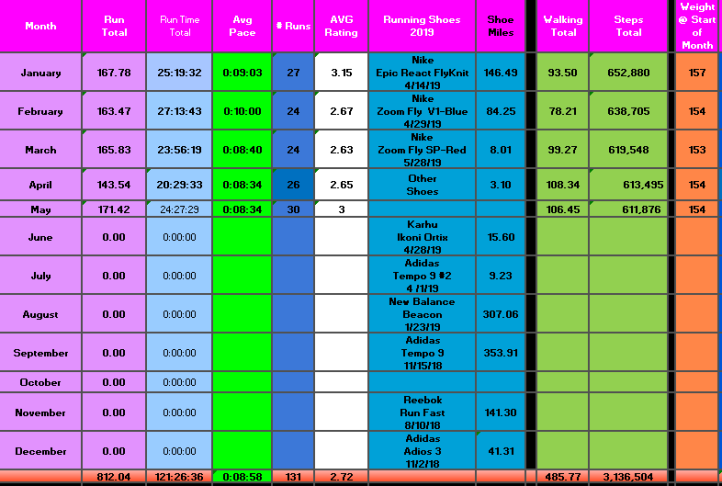 Yes, I hit mileage I haven’t hit for quite a while – 170 plus miles for a month.

That was the big win and a fairly big surprise that I didn’t think I was going to get over 170 miles with whatever combination of cold/sinus crap/allergies/cough has beaten me up and sucked the energy out of me the last couple of days of May. I just call it the creeping crud.

I did use the Hansons Half-Marathon Method as the basis for my training but tweaked it a little to make it more amenable to an old fart who needs a bit more rest and is not interested in accumulated fatigue at this point in my training.

Also, I have been running a couple of times a week with Jon and Mike, which has been nice. Having other runners to talk with during runs is a good thing and makes the running easier.

I have been pretty in a two-show rotation, with a third pair getting a good speed work run in during the last week of May. 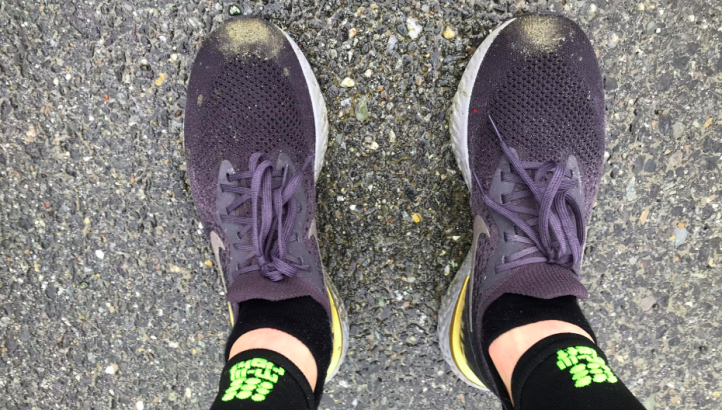 First up would be the Nike Epic React v1 – I have been using them as my do everything but speedwork shoes. They have been comfortable and protective enough that I enjoy running in them.

The Epic React v1 has just worked well for me. 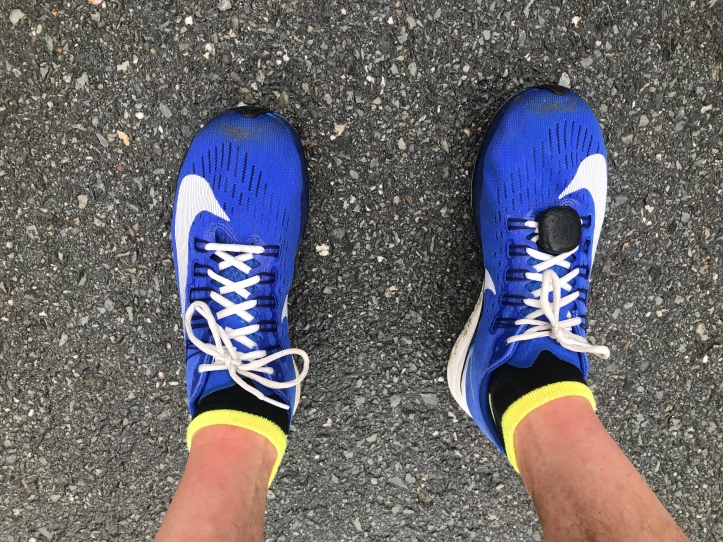 Second, are the Nike Zoom Fly v1 – I have used them as my speedwork Tuesday shoes, faster-paced workouts, along with a nice longer 11.0-mile run and a few easy runs. These are the shoes that excite me the most.

I run differently in them than I do in other shoes and that is documented in my Milestone App leg swing results. If you look after about 15 runs in the Zoom Fly there is a noticeable difference in the Leg Swing graph compared to running in other shoes. This small difference seems to make me slightly more efficient, which in turn results in less effort to achieve the same paces. Also, they feel very comfortable and do not bother my feet. Even with all this, they still feel more like a light-weight – faster daily trainer than a race day shoe for me. 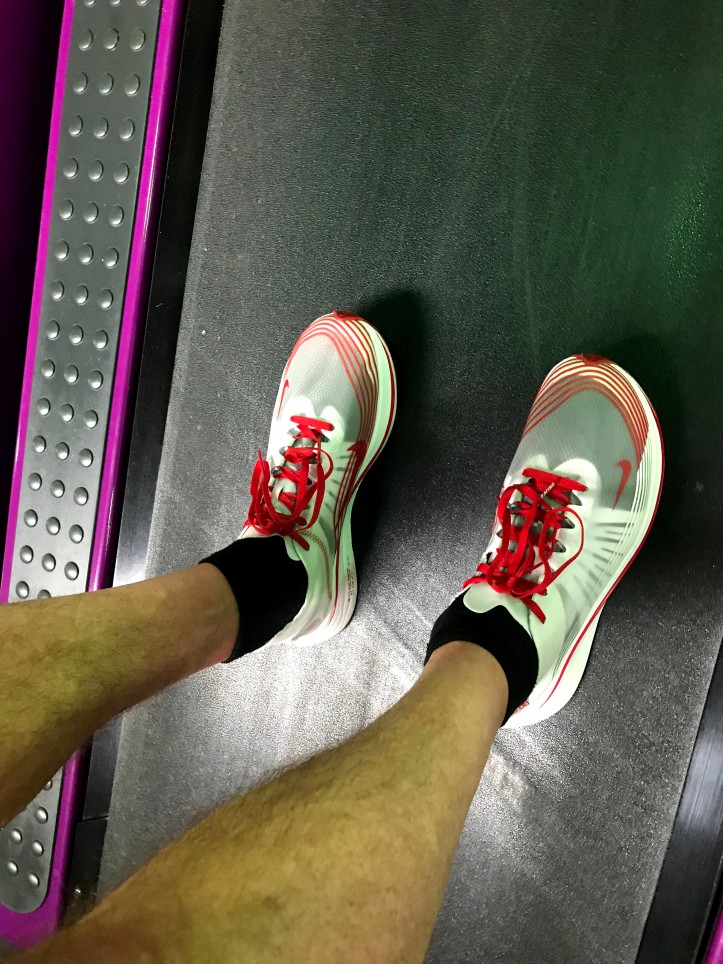 A late entry into the mix is another pair of Zoom Fly only this one is the SP. I got to thinking about the SPs because they seemed lighter than the V1 and they are just about an ounce lighter. The 7.0-ounce weight puts them into more a race day shoe for me and when I was able to do a 12 x .25, with strides workout last week, which totaled 8.0 miles on their initial run…with no issues related to the shoes. I was very impressed. I need to put more miles on them, but the initial experience was very good.

The Nike Wildhorse has been retired to lawn mowing and garden shoes, the uppers are starting to finally come apart. While didn’t run much in them I am pretty sure that they have well over 600 miles of walking in them, since I wore them as my primary shoes every day since mid-October.

My New Balance Beacons were great on the treadmill this winter, but I noticed that my right knee started to complain while I was running in them, which is my cue to move them out of the rotation. They have turned into my daily walking shoes and are doing well in that function.

My experiences with the Zoom Fly models makes me want to see what the Zoom Fly FlyKnit is like and with the changes that Nike made to it, makes it an intriguing option that I Bennie will probably look at getting me for my birthday.

I am still using the Lenovo Thinkpad x230T as my primary computer and loving it. I did change out the disk drive to a 500 Gb SSD, which sped it up significantly. It did surprise me at how little time it took to change it out…well once I cloned the disk.

Unfortunately, I am not as thrilled about how the iPhone 7 and iPad Pro integrate with Windows and the x230T, but it is a little better than it used to be. You know, how Microsoft and Apple products work together or at least tolerate the other’s products. Definitely not as easy as all one silo or the other.

That will not change as long as Microsoft does not have a flagship smartphone that ties easily to the Windows OS. Maybe they need to develop an Android-based phone OS and put a Windows shell on it like they are doing with their Edge browser. Their efforts to sort of integrating their products into IOS and Android now are about all they can do until they get back into the mobile phone game again.

Oh yeah, speaking of the iPhone 7, I did a 6-hour dunk test, which you can read about here. It is still working fine a few weeks later, but I do not recommend submerging your iPhone 7 for that long – your experiences might not be as good as mine were.

May 2019 was a really good month running, although I spent more time on the treadmill than I usually do, I still got in a good amount of miles and didn’t beat the body up too much until the end of the May. Now to just fight off whatever the creeping crud is, so I can get back to training for whatever it is I am training for.

I guess right now I am simply training to run and running to train. Which is not a bad thing, when I sit down and actually look at it. Racing still isn’t interesting me all that much and I am pretty happy about just running a lot of miles, some faster, some slower, but none with the pressure that I “have” to do them, it all about the idea that I get to run.

So overall, I can’t complain too much about my running in May 2019 and my computing life is getting shall we say sorted out. However, I am happiest about how my running shoe rotation has sorted itself out and how well I am running – now to just keep doing it.

Along with getting rid of whatever creeping crud is attempting to waylay me this time.