Okay today was supposed to be a rest day, but since I had one on Sunday, I felt as though I really wanted to run.

However, I would like to think that I was fairly smart about it.

Yeah, it snowed here this morning, we ended up with about 1-2 inches of the white shite (that is what I start calling it this time of year) and it was just enough stuff that I did not want to run outside on it. Yeah, another day on the treadmill.

In respect to it being a rest day, I only did 3.1 miles @ 6.5 mph. Nothing special about the run itself, but as a result I culled another pair of shoes.

There was a reason that I stopped running in the Razor 3s last summer and today I remembered what the issue was. They do not disappear on my feet. The forefoot has just enough of taper that it pushes my little toe into its neighbor, which causes me to focus more on if it is going to really start bothering or just stay at that level.

While the feeling never got any worse, it didn’t get any better either. So when I got home I tried several more combinations of socks/insoles to see if I could loose that “its gonna get worse feeling” and none of the combinations worked, so after cutting a walk short after taking out the insoles and having them almost cause a blister under my ankles, they are going to go away. As much as I wanted them to work for me, my feet are weird and the Razor 2s didn’t disappear when I was wearing them, like they needed to.

I think that I am down to the lowest number of shoes in my possession in several years. Let’s see 2 pair in the garage, 1 pair in the closet, 1 pair under the bureau, 1 pair in Clifford, 1 pair in my gym bag, 2 pair by the front door and 1 pair of lawn shoes by the back door. Yeah, that’s all the shoes that are mine in the house now. Oh, yeah I have a pair of old Mizuno Elixir 7s squirreled away in my summer clothes storage box.

Which means that my attempts to pare down my collection of running shoes is working. According to Mary, that it is a good thing, me I am not so sure, but I will go along with it for now.

I needed the run and was careful to not overdue the speed part for a change. Let’s see how tomorrow’s planned long run goes in the wind tunnels that are predicted for tomorrow.

By the end of the day, the sun was out and all the snow melted…typical Spring day in Maine – ayuh. 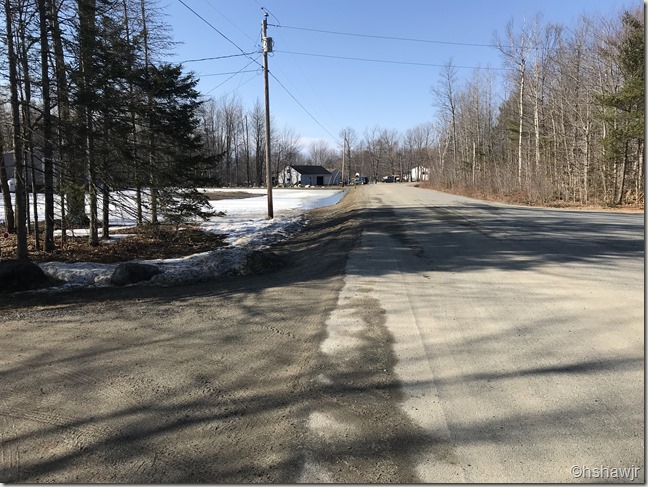