Let’s get real, I was wimpy today.

The temps were in the mid 20s and the breeze was more than I wanted to deal with at this point and time. So instead of doing my scheduled long run outside, I decided that running on the treadmill was going to be the plan of the day.

Unfortunately, when I left the house, both my wife and I commented about how we felt a little off, so I wasn’t heading into my long run with the idea that I was going to finish. It was more like, I will do whatever I can and be happy with the results.

No warm-up, I just wanted to get things over with this morning, so this is the workout that I ended up doing.

6.6 miles @ 6.7 mph. Nothing special through 3.0 miles, at that point the GI issues started to haunt me, but I was able to hold things off until after the 6.6 mile point. I figured that it was about half-way and the treadmill would be shutting off in a couple of minutes, so it was a good point to…

Go for a bathroom break

The last 6.5 miles I felt a little more relaxed and did feel better during the run. At 8.0 and 10.0 miles I seriously considered bagging the runs, but I figured that I was getting closer to finishing the 13.1 and figured that I might as well keep going.

Yeah, once I got going again and got to the 10.0 mile point, I decided to start picking up the pace a little just to see if the old body had anything left. When I got to the 12th mile, I wanted to see how I felt at my hoped for half marathon race pace would feel like when I am tired.

Not nearly as bad as I thought I would feel.

From running the distance in the past and how well my training has been going this cycle, I was pretty confident that I could run the half marathon distance physically and it was just a matter of getting the brain to agree to do it again.

Now that I have run the distance on the treadmill, which to me is a LOT harder to run for this long, it now becomes more a question of how fast I can run it. Which is where I want to be both physically and mentally going into the last third of the training plan. 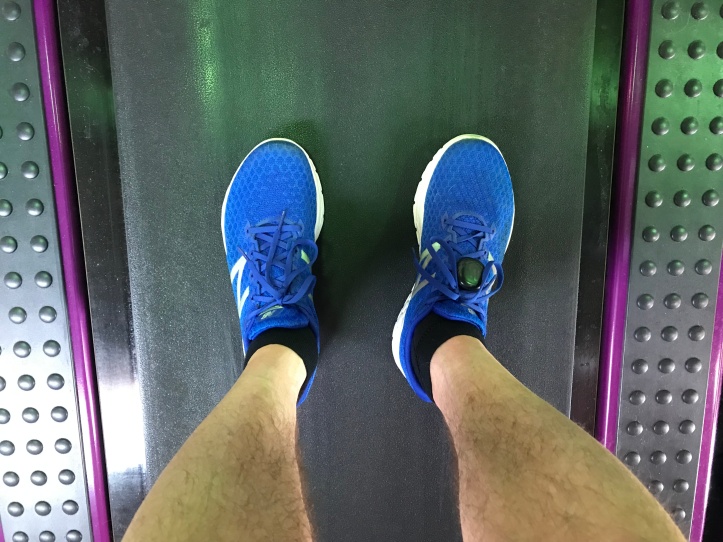 This is the first time that I have run this far on the treadmill in a long, long time and I was super impressed with how well the Beacons did. No issues with the shoes at all. The biggest problem that I had was the bump in the sock on my right foot irritating my Tailor’s Bunionette a little. Nothing serious, but enough to know it wasn’t quite right, so I won’t be using those socks again for a long run.

Even though I didn’t go into the run all that confident about how it would be, the run went a LOT better than I expected. Always a good thing. Sometimes even when you don’t really feel all that confident or are feeling a bit off, once you get going things even out and you are able to complete the workout as scheduled and actually do a lot better than what you had planned in the first place.