Today was my scheduled long run – 11.0 miles at just over 9:00 minute pace was the plan. Not a long, long, long run, by any stretch of the imagination, but further than I have run in quite a while, so I didn’t need any extra issues from the roads being trashed from last week’s snow/ice/rain storms.

Whine alert – yes I do more than my share of whining in this post, so you can chuckle at me starting now. 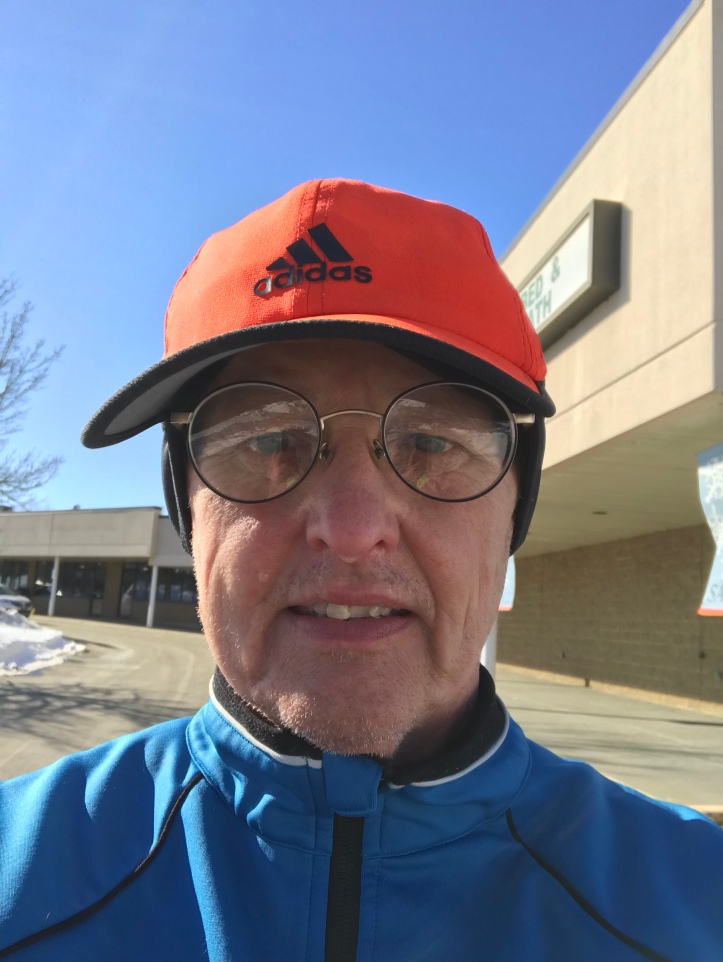 That footing thing had me concerned about running locally in Sidney and while I knew outer Civic Center Drive in Augusta was clear, but I really didn’t feel like running there again today and I was pretty sure that the Rail Trail probably was not all that runnable.

Then I remembered how running up in Waterville last year was better than any where else in the area. Hell, I even changed my Planet Fitness membership to up there because the outside routes were a lot better for running. So I headed up there to do my long run.

When I got to Waterville I saw the road conditions and got a bit concerned. The side of the roads were not plowed and had a frozen layer of plow comming (you know the stuff the plow leaves as it goes by) on just about all the main routes.

So I took off to see how the bridge to Winslow was and from the light by Good Will, until you got across the Sebasticook River really wasn’t runnable in my opinion. At least it was not safe to run, with the iced over sidewalks and no room on the side of the road, with the amount of traffic that I would have to encounter.

I even drove around Cool Street and First Rangeway, not great, but runnable. If it hadn’t been so late, I was seriously thinking about heading to Augusta or even back to Sidney, where at least the roads were clear or there would be less traffic.

It was getting late.

So I figured that I would do the Planet Fitness – Colby Loop and modify it enough to get in 11.0 miles.

Within the first quarter mile my feet were soaked, so that wonderful feeling of cold wet feet in 24*F to start, was going to be with me the rest of the run…loads of fun.

When I drove around, I had stayed on the main travel routes, unfortunately my actual running route included several side roads – which sucked – bad. Lots of ice, water, slush or snow covered ice was found.

Going through Colby the sidewalks were the best shape of any place that I ran today and the Porta-Potties were right beside the track for convenience sake. Yes, I stopped, but it was a quick in and out.

The hardest part of the run probably was going up the hill leaving Colby going towards Mardens on Washington and Lincoln wasn’t much better. The main road was clear, but the breakdown lane had not been plowed and was a mess to run on.

I can honestly say that I believe that the road conditions added about 5-10 minutes onto my time this morning. Slowing down for ice, puddles, avoiding getting hit by vehicles – one almost got me as I turned onto Cool Street, when I slipped a little on ice hidden in a puddle and went down to a three point stance.

At times today was more like running trails than roads and I wished that I had my trail shoes with a rock plate. My Tempo 9s were doing great with the varied conditions, but when I hit those extended stretches of plow leavings the bottom of the foot protection just wasn’t there. Any problems that I had with my feet today had nothing to do with the Tempo 9s not working for me, it was that they do not have a rock plate and the ice balls/chunks that I would land on eventually bothered my feet.

Actually, I was surprised that I came as close to my long run goal pace as I did with the roads the way they were, so I was running well. Although I did run out of mojo after 10 miles – it was more mental mojo than physical though. I have to toughen up the old noggin to running for this amount of time. Since this is longer than the time I want to run my half marathon race.

Well at least I know that I can run this long. 😉

Even with all my whining I still have to say that it was a pretty decent run.