A Bad Day and a Good Run

Some days are better than others and today was one of those days where the running was great, but some other thing were…well to be honest kinda shitty.

A couple of days ago I was out in the back of the garage and was over in the corner where I keep a lot of my “stuff”, when I saw my old Coast Guard garment bag hanging from the rafter and when I check on the bag last summer everything looked fine. It has hung out there since 2001, without any issues – we have a couple of those sonic devices in that area and they worked great for keeping the critters away.

I got to thinking that day that I would love to try it on just to see how it fit, but got busy and forgot about it.

Well I got around to getting the garment bag down this afternoon and when I brought it in the house, Mary told me it stunk – bad. When I opened it up I found out why. The mice had built a large nest in the garment bag. 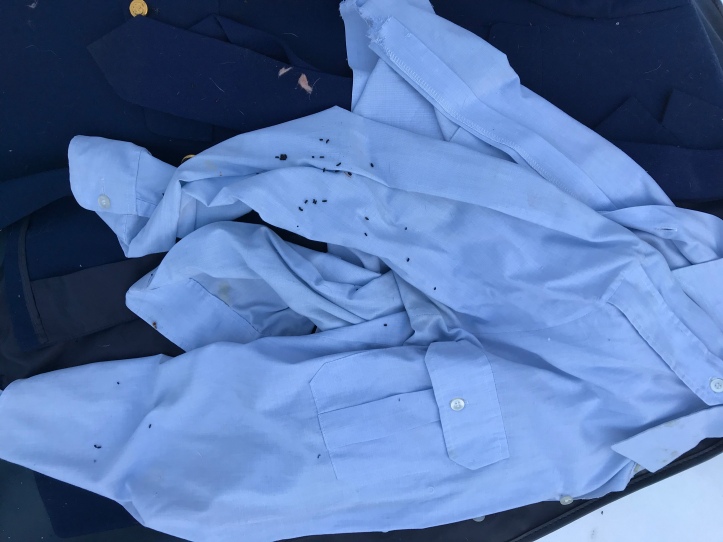 All my old Coast Guard uniforms had holes chewed in them, or pissed and shit on. Even my shoulder boards were trashed! Everything will need to be thrown out and is not salvageable – other than the jacket buttons and the Eagle on my Hat, which will have to be disinfected.

Needless to say I was more than a little upset!

It isn’t so much that the mice did that, it is what they do. It is more that those uniform items were one of the last physical links to a part of my life that was very important to me. They contained memories of a life and career that not too many people today realize or know about me.

I even have a feeling that the uniform might have been a little too large for me now. When I left the service I was a 36-38 waist and over 170 pounds (just a little pudgy), now I am a 32″ waist and hovering right around 160 and probably in better shape now than I was in 1996 when I retired, just 22 years older ;-).

What really bothers me is that Mary never got to see me wear this uniform, because I hadn’t put it on, since I retired all those years ago. It is a part of my past that she was not a part of and even though I talk about it more than I should, she never has seen me in uniform, other than photos.

This made me really realize that sometimes we need to just do and not put something off or procrastinate doing, because often when you wait, something happens to make it so that you never do get the chance.

It was something that I always thought about doing, but never got around to doing. Now it is too late, unless I go ahead and start over with a new CWO3 Coast Guard Dress Uniform, getting it piped, all the ribbons, boards, etc. I don’t know if I will get another one or not. I am still in denial about it and will need a bit of time to figure out if it is worth the expense to do it or not.

Although one of the little beasties that trashed my uniform didn’t survive the visit to the garment bag. I found him in the bottom already dead, so no I did not kill him. Although if he had been wandering around in there, I have a feeling he would not have gotten to far the mood I was in when I saw what they had done.

I usually don’t go out of my way to kill critters, but this afternoon was the straw that broke the camel’s back and mice became part of the problem and I went to the store to find permanent solutions to them being a problem. It is their time to either move on or die. No sympathy here – not anymore.

Oh yeah, I did have a pretty decent 5.0 miler on the treadmill at Planet Fitness and actually had a pretty good day going, until I looked in that garment bag.

Well life goes on and in the overall big picture of my life this is a pretty minor thing, but it is just another piece of a part of my life that all I have left are a few photos and some memories, which as I age seem to go away as well.

I will have to figure out something else to wear when I cross the bar in 20-30 years, before they get to spread my ashes. Unless I do decide to get a new uniform.

It will be bittersweet tomorrow when I put that bag of my old uniforms in the transfer station to be disposed of like a lot of old memories – to be forgotten and left behind.

Kind of sad in a way.